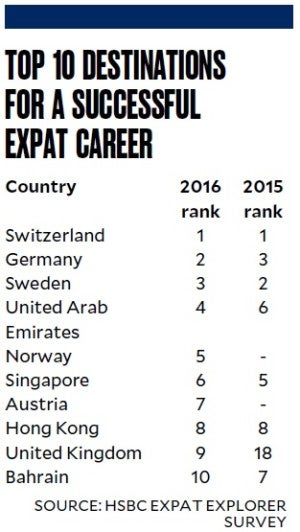 For job-seekers looking for greener pastures overseas, Switzerland is deemed the top destination for a successful expat career, based on the Expat Explorer Survey of British banking giant HSBC.

By region, the survey showed that Europe was rated the best destination for those looking to progress their career abroad and benefit from great working conditions.

Aside from Switzerland, five other European states—Germany, Sweden, Norway, Austria and the UK—are cited as among the top 10 countries for a successful expat career. This is notwithstanding jitters over the stability of the European Union, from which the UK voted to exit.

“The survey suggests that expats in the Philippines value work-life balance and work fulfillment while being away from home, and this is not surprising. The Philippines has increasingly become a center of economic growth and with it comes a great number of friendly neighborhood expats. Filipinos are world-renowned for their hospitality and as an expat myself, part of my daily experience is the people’s openness to different culture and friendliness,” HSBC Philippines retail banking and wealth management head Kris Werner said in a statement.

“Filipinos are also some of the most ambitious and talented professionals, with a good level of well-developed English that has a profound impact on the ease of communication—and all this definitely makes work and conducting business in the Philippines more fulfilling,” Werner said.

HSBC’s Expat Careers tool is aimed at helping those seeking international careers to find the places that best meet their goals.

For the second year in a row, Switzerland was ranked the best all-round destination for a career abroad. The country combines the best earning prospects with a good work-life balance and an excellent work culture. The average annual expat income in Switzerland was estimated at $188,275, almost twice the global average of $97,419.

Also, 69 percent of expats in Switzerland cited an improvement in their work-life balance and 61 percent said the work culture was better than in their home countries.

The world-wide survey of expats reveals that although expat earnings and benefits in Europe are below the survey average (except in Switzerland), the region offers an exceptional working environment that makes it highly desirable. The majority of expats across the region (52 percent) believe the European work culture is an improvement compared to their home countries, especially in Sweden, where 71 percent of expats gave such assessment.

The UK, Austria and Norway are newcomers to the top 10 destination for expats. The UK has jumped nine places (18th in 2015), with expats in Britain among the most likely in the world to pick up new skills compared to their home country (64 percent) and progress their career (62 percent).

When it comes to career development, Hong Kong and Singapore come out on top. The majority of expats in both countries (68 percent and 62 percent, respectively) agree they are a good place for expats to progress their career, compared with the global average of 43 percent. However, this may come at a cost, as 30 percent of expats in Singapore and 50 percent in Hong Kong reported a decline in their work-life balance since moving.

Dean Blackburn, head of HSBC Expat, said: “The start of the new year is a good time for expats and prospective expats to reflect on what they have achieved to date and start to plan the next steps in their international careers. What’s clear in our survey, is that working abroad offers a wealth of opportunities to suit many different career needs and personal priorities.”

“Some expats are looking for an accelerated route to the top of the career ladder, some want to put themselves on a firmer financial footing, while others want to improve their work-life balance.