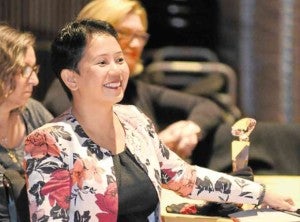 Growing up poor didn’t stop Analisa Leonor Balares from getting an Ivy League education, working at Wall Street, and sharing similar opportunities with other women and girls through her Womensphere Foundation.

She was born into a poor family — her father was a family driver and her mother a househelp — but brains, perseverance and innate leadership skills propelled Analisa Leonor Balares into getting an Ivy League education that eased her way into becoming a rainmaker at Wall Street, a valuable manager who brings in business from wealthy clients.

But wanting to work toward a more inclusive and sustainable world by helping empower women and girls made her quit the corporate world in 2008 to put up Womensphere Foundation, a global organization that seeks to accelerate women’s advancement in leadership, innovation and entrepreneurship.

New York-based Balares was recently handpicked by Swiss global banking giant UBS as one of its inaugural batch of “Global Visionaries,” described as a select pool of 10 extraordinary people who dedicate their lives to projects, research, movements and technologies that have the potential to profoundly impact our lives and the society we live in.

“Analisa understands the economic benefits of higher participation rates of women in the workforce and that a holistic approach needs to be applied to women’s education and development,” said Simon Smiles, chief investment officer at UBS Wealth Management.

Added Smiles in an Inquirer e-mail interview: “Analisa has drawn on her own experiences to design Womensphere’s distinctive community and ecosystem approach (and) apply it for women’s development in Science, Technology, Engineering, Art and Mathematics (STEAM) subjects across all socioeconomic classes and generations.”

Since its launch in early 2008 when the markets were crashing, Womensphere has reached more than 10,000 leaders, and inspired and trained more than 5,000 emerging women leaders on leadership, entrepreneurship, innovation and STEAM.

“That is just the very tip of the iceberg,” Balares said in an e-mail interview with Inquirer. “As we scale through technology, our digital initiatives alone will enable us to reach, inspire, educate and empower many times that number within one year.”

Born in Leyte, Balares juggled living in the world of the ultrarich, urban poor and rural countryside when she was growing up. Both her parents worked for a benevolent American family who lived in Forbes Park, where she stayed while attending Guadalupe Elementary School in Makati.

“Despite growing up poor in the Philippines, I felt empowered to succeed because of the mentors and role models I had when I was really young,” she said in a video produced by UBS.

Balares spent the first 16 years of her life in the Philippines before going abroad on educational scholarships. While she lived in North Forbes Park, she was well-exposed to Makati’s poor neighborhoods which she had to traverse on her way to school.

Since age 13, Balares had been organizing leadership training conferences and science camps for high school students in Metro Manila as Manila and NCR chair of the Philippine Society of Youth Science Clubs.

At Manila Science High School, as part of the team that won national competitions, she found herself representing the country in science fairs in Singapore and Thailand.

By the time she was 16, Balares’ academic achievements and student leadership experience opened up a number of scholarship opportunities. She accepted an offer from the Canadian International Development Agency and Ayala Foundation for a two-year International Baccalaureate program at Lester Pearson United World College in Vancouver.

While in Canada, she received a full scholarship to study at Mount Holyoke College, the first college for women in the US, where she majored in Economics and Math.

In New York, Balares joined Goldman Sachs in High Technology Investment Banking, where she worked on $1.5-billion worth of high-tech corporate financing and merger and acquisition deals.

She also worked at asset management firm Milestone Capital. In 2005, she obtained her MBA from Harvard Business School.

Prior to the UBS citation, Balares was honored as a “Young Global Leader” by the World Economic Forum. She was also handpicked as one of “30 Outstanding Women Leaders” by the National Council for Research on Women, and received the Madam C.J. Walker Leadership Award from the National Minority Business Council.

The New Leaders Council honored her as well as one of its “40 Under 40 New Leaders in America.”

Balares takes such leadership recognition in stride. “Within Womensphere, we have a view that everyone can be a leader, an innovator, (or) an entrepreneur and that you don’t have to go to an Ivy League institution to achieve this.

“This is why it is important to democratize access to knowledge. We need to take the best practices coming from Ivy League institutions, companies, governments and communities, and disseminate this information,” Balares said.

Womensphere, she said, is building a global network of incubators designed to empower women and girls, with each incubator offering them five things: ecosystem, community, connections with inspiring role models, training and education, as well as recognition and awards.

It is also important to have a digital component to reach the over 1.5 billion internet users who are women and girls, Balares added. The internet allows Womensphere to deliver the same type of training and education it offers live in communities.

“For a program to succeed, it needs to be integrated— through partnerships—into local communities and within institutions where women are learning and working,” Balares said.

“We also have a range of programs that focus on women—from first-time entrepreneurs or those just starting college, to women who are in the middle of their careers and need help progressing to the next level of leadership.”