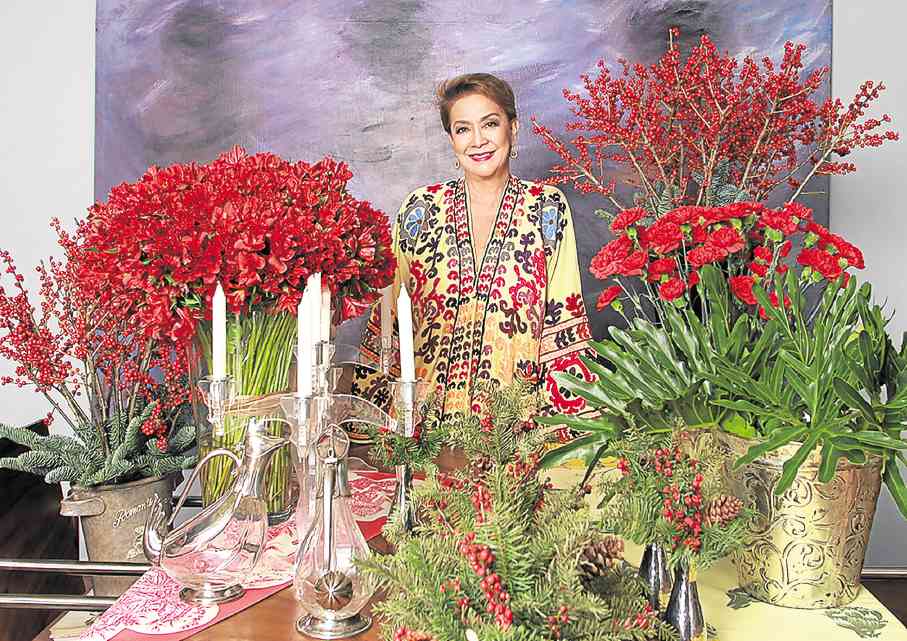 In 1979, a start-up flower shop came out with an arrangement of white dendrobiums set against a giant Anahaw leaf in a tall bamboo vase.

It was nothing like the traditional composition of flowers at different heights, padded with fillers, bursting from a white vase.

Owner Nina Halley of Love Garden knew then that she was up against big flower shops that had the competitive advantage of reputation in the market.

To create a niche, she produced arrangements that were unique and customized to the customer’s budget.

“I had to show that customers were getting more art and drama,” says Halley, “To thrive in a creative business, you have to think out of the box.”

The look of flowers touching large foliage has since become the signature of Love Garden.

Halley did not immediately become an entrepreneur.

After graduating with a degree in Hotel and Restaurant Administration from the University of the Philippines in 1976, she joined the Hyatt Regency Manila upon the invitation of then general manager Ralph Peter Jentes.

She worked her way up from administrative assistant to banquet and sales manager and eventually assistant food and beverage manager.

The corporate experience gave her the skills to manage and promote a business.

After three years, Halley decided to go on her own and establish a business that showed off her floristry skills.

She set up the Love Garden in a 60 square-meter, two-story space along Arnaiz Avenue, Makati.

Back then,  Esperanza Flowers and Encarnacion Bechaves were the most popular florists. These shops awed customers with their abundant displays of blooms.

To set herself apart, she displayed a singular arrangement against a dark green velvet background under a spotlight. The living room set-up made the selling area feel homey.

The Love Garden also offered a wider selection of arrangements compared to the competition.

The clients not only appreciated the sophisticated set-up but also the product innovations.  While most florists used plain white pots for the bouquets, Love Garden  introduced bamboo baskets and other native accessories. Flowers were adorned with birds made of bamboo shavings, capiz butterflies. The  succeeding collections introduced innovations such as cattleyas in a ceramic baby boot with gold shoestrings.

The combination of flowers and gifts has also remained popular.

For instance, yellow liliums are arranged in an acrylic wine chiller with a bottle of champagne and a cluster of grapes.     Halley credits her hotel training for her ability to manage the inventory of hardware and perishables such as flowers and know the exact amount of orders from suppliers to avoid waste.

She learned how to market during her hotel days, and she has applied that valuable knowledge in her store.

In the early days, and armed with her velvet-bound product catalogue,  Halley made cold sales calls every day, making the rounds of offices,  and asking who was in charge of ordering the flowers. In the first six months, the customer base reached 100.

“I didn’t look at it as a job. I loved meeting people. You can’t do that anymore with tighter security in the building,” she says.

The Love Garden also positioned itself in media by sponsoring noontime TV shows.  Halley was interviewed by the late socialite TV hostess Elvira Manahan in a talk show when she introduced flowers with balloons.

In 1999, Love Garden was one of the first to import premium Ecuadorean roses for Valentine’s Day.

These long-stemmed roses sell for P800 to P1,000 each during Valentine’s, and yet enjoy high demand.

Regular Love Garden bouquets range from P1,500 to P5,500 each and the shop can easily adjust according to the client’s budget.

Red rose bouquets are the most salable at prices ranging from P1,500 to P4,500 each.

“We have done the range from P250 to P50,000,” says Halley. The shop once delivered an entire truckload of roses.

“If a young boy can only afford P200 for his mother, we can put a striking flower on an attractive vase,” says Halley.

True to its spirit of innovation, Love Garden was one of the first to venture into online commerce in the early 2000s. Halley’s daughter, Rhiannon, has been doing the digital marketing and is now learning more about operations.

The online presence has widened its market to include overseas customers, mostly from the Middle East who want to send flowers on Valentine’s Day and Mother’s Day.

Halley is grateful that business has been stable through the years.

It’s a matter of keeping the nose on the grindstone and keeping track of expenses.

When on extended trips abroad, she keeps tabs on the business through her computer and smartphone.

“One can manage the flower shop from anywhere in the world now. It’s a good control for the business,” she says

Like most flower shops, Love Garden’s business reaches its peak during Valentine’s Day, but it has fortunately developed a loyal following that keeps revenues coming in the whole year.

Halley makes it a point to share her profit with her staffers.

“My flower shop is for my people. We owe it to provide livelihood for them. People who  have been with us  for over 20  years are grateful. They were able to educate their children from their earnings here. These children are now professionals,” she says.

Halley shares that a flower shop business is a creative venture. Profit margins can be slim on some orders and inventory management is challenging because flowers have a short shelf life.

“You don’t enter the flower shop business to become a mogul.  Psychic income is derived from the self-expression,” she says. —CONTRIBUTED

Read Next
Building an appetite for 2017
EDITORS' PICK
DOH checking if 3 COVID cases due to Omicron
Holidays made best with Acer’s ‘Holidays at Home’ raffle promo
Gov’t fine-tunes alert level system
A grand way to celebrate the holidays
Corruption in PH: Where presidential aspirants stand
Smart offers wireless fiber-like speeds to Filipino homes with country’s first 5G Prepaid Home WiFi
MOST READ
Bong Go left PDP-Laban with presidential bid under PDDS — Pimentel
FDA warns against use of 5 imported beauty creams
Isko’s messaging takes a turn as he commends Duterte
Orthodox priest shouts ‘Pope, you are a heretic’ at Francis in Athens
Don't miss out on the latest news and information.

Orthodox priest shouts ‘Pope, you are a heretic’ at Francis in Athens