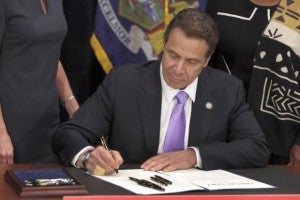 In this photo, taken April 4, 2016, New York Gov. Andrew Cuomo signs a law that will gradually raise New York’s minimum wage to $15, at the Javits Convention Center, in New York. New York joins 18 other states by raising its minimum wage in 2017. (Photo by RICHARD DREW/Pool, AP)

ALBANY, New York — It will be a happy New Year indeed for millions of the lowest-paid US workers. Nineteen states, including New York and California, will ring in the year with an increase in the minimum wage.

Massachusetts and Washington state will have the highest new minimum wages in the country, at $11 per hour.

California will raise its wage to $10. New York state is taking a regional approach, with the wage rising to $11 in New York City, $10 in its downstate suburbs and $9.70 elsewhere.

“This $1.50 increase, I cannot even comprehend or tell you how important this will be,” said Alvin Major, a New York City fast-food worker. The 51-year-old father of four helped lead the fight for the increase in his state, one of several successful efforts by fast-food workers and other low wage workers around the country. “The price of food has gone up. Rent has gone up. Everything has gone up. … This will make a difference for so many people.”

Voters in Arizona, Maine, Colorado and Washington approved increases in this year’s election. Seven other states, Alaska, Florida, Missouri, Montana, New Jersey, Ohio and South Dakota, are automatically raising the wage based on indexing. The other states seeing increases are Arkansas, Connecticut, Hawaii, Michigan and Vermont.

Workers and labor advocates argue the increases will help low-wage workers now barely making ends meet and boost the economy by giving some consumers more money to spend. But many business owners opposed the higher wages, saying they would lead to higher prices and greater automation.

Some restaurant owners may consider reducing portion sizes or charging for side dishes that were once included in the price of a meal to absorb the increase, according to Melissa Fleischut, president of the New York State Restaurant Association.

“I’m sure prices will go up where they can, but restaurants want to avoid sticker shock,” she said. “They’re going to have to get creative.”

The adjustments in Oregon, New York, California and several other states are part of a series of gradual increases to a $12 or $15 hourly wage.

The minimum wage will also go up this weekend in 22 cities and counties, including San Diego, San Jose and Seattle.

The high number of states and localities raising the wage this year reflects the successful work of fast-food workers and organized labor, according to Tsedeye Gebreselassie, senior staff attorney at the National Employment Law Project, as well as federal inaction on the wage. The national minimum was last raised, to $7.25, in 2009.

“These aren’t only teens trying to make some pocket money,” she said. “Increasingly it’s adults who are using this money to support their families.” –David Klepper/AP

TAGS: US economy, US minimum wage