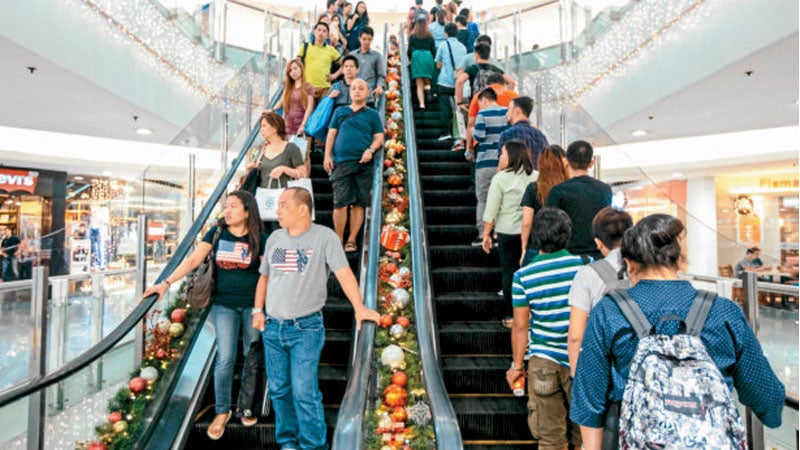 On a typical weekend, close to half a million people flock to SM City North Edsa, nearly double the entire population of some South Pacific territories, like Vanuatu or New Caledonia.

Built on sprawling grassland in 1985, a year before the Edsa People Power Revolution that toppled dictator Ferdinand Marcos, SM City North Edsa was the country’s first massive shopping mall that opened its doors despite the tumultuous political situation then.

This was also said to be where it all began—where the seeds of the malling culture was sowed among Filipinos on an idle piece of land in what was once a quiet part of Quezon City.

It was in North Edsa where tycoon Henry Sy Sr., founder of the SM group, became a legend at spotting opportunities. The build-it-and-they-will-come gambit worked and over the following decades, SM group would replicate this strategy in other parts of the metropolis, in the provinces and even in China.

Over the years, shopping malls got prettier and more diversified in their offerings as competition became tougher. Big property developers like Ayala Land Inc. and Robinsons Land Corp. also expanded their own shopping mall empires in Metro Manila and the provinces.

From big box-type malls, design has evolved to incorporate more sustainability features, greenery, open space and entertainment areas that cater to more discerning consumers. These new malls can compete with their peers in other parts of the world.

In 2015, SM Prime rental revenue from commercial spaces grew by 12 percent to P40.7 billion, of which 87 percent, or around P35 billion, was contributed by SM malls. As of end-2015, SM Prime had 56 malls in the Philippines with 7.3 million square meters of gross floor area (GFA) and six shopping malls in China with 900,000 sq m of GFA. China contributed less than 5 percent of revenue. Around 51 percent of mall revenues were derived from Metro Manila.

The malls make their main impact on the economy in the construction phase. After that, it will be in support services, according to Jose Mari Lacson, ATR Asset Management head of research.

“It’s the retail sector that is a larger portion of the economy and it is the mall segment that enables retailers to achieve critical mass faster,” Lacson said.

Malls are among the largest employers in the Philippines. The 44 malls that RLC operates employ 100,000 people, excluding outsourced workers.

About 100,000 also are employed in 45 Ayala malls, including those in “anchor” stores like Landmark and Rustan’s.

SM Prime, the country’s largest mall operator, said its 60 malls around the country employed around 370,000 people this year.

The group has incorporated business process outsourcing (BPO) and office towers in estates anchored by shopping malls alongside sky gardens, sky parks and performing arts theaters in some of its regional malls.

Mall of Asia will have a Galleon Museum and its top level will feature a football field. Seaside Cebu and Cabanatuan have playgrounds.

Megaworld integrates residential and commercial establishments into “townships,” which are “economic clusters” that generate direct employment in businesses such as BPOs, retail outlets, hotels, construction and security, as well as indirect employment like jobs in transportation and food processing.

Tan said Megaworld malls and townships were designed to be tourist destinations. “Tourism is the fastest way to create many jobs, which is ultimately good for the Philippines,” he said.

Arlene Magtibay, RLC general manager for commercial centers division, said each of their shopping malls contributed “very significantly” to the local economy, generating thousands of jobs and high revenues for the host city.

In addition, Magtibay said the communities benefited from RLC malls’ sustainable operations that lessened competition with the localities for vital resources through the use of solar power, recycled wastewater and rainwater.

Ayala Malls also promote walkability and transit-connectivity to enhance transportation terminals and make them more comfortable, according to Fernandez.

Ayala Malls have invested or teamed up with bus operators to offer point-to-point (P2P) bus services to and from Glorietta, Trinoma, Alabang Town Center and Ayala Malls South Park.

RLC’s P2P with HM Transport Inc. takes passengers from Fairview to Makati and vice versa. SM Prime has invested in its own bus transport system in Cebu to bring people to SM Seaside City.

SM Prime and ALI derive the bulk of their revenues from Metro Manila but contributions from provincial areas are getting bigger.

The market will grow even more as infrastructure and transportation projects are completed, said ALI’s Fernandez.

“Given a young and growing Philippine population, and many new store concepts coming in, we think the market is not yet at its saturation point, even in Metro Manila,” she said.

Considering the mall per capita as well as shopping mall per square kilometer in the metropolis, SM Prime’s Ong agreed that Metro Manila was still “considerably far” from the saturation point.

Ong said that since many malls were not easily accessible to customers and considering heavy traffic, more retail hubs could be built closer to communities.

Sia built his fortune on the popular Mang Inasal. He sold his stake to rival Jollibee Foods Corp., made friends with its founder, Tony Tan Caktiong, and they teamed up on a property development venture.

Their DoubleDragon Properties Corp.—so-called because they both were born in the Year of the Dragon—will complete building a chain of 100 community shopping malls across the country by 2020.

CMCCI recently teamed up with broadcast giant ABS-CBN to roll out cinemas in the provinces. ABS-CBN will manage the booking and the food and beverage operations of the theaters while CityMall will build the cinema infrastructure.

Ten cinemas, each seating 100 to 120 people, are scheduled to open in CityMalls in Luzon, the Visayas and Mindanao in the second quarter of 2017.

Property magnate Manuel Villar Jr., founder of Vista Land & Lifescapes (VLL), is a relatively late entrant in the shopping mall business but with the group’s vast properties, he expects to scale up rapidly.

“With the worsening traffic [congestion] these days, you don’t want to drive for three hours just to watch a movie. But the problem with the neighborhood malls is that they are too small. So, if you can come up with smaller but nice malls, people will come,” Villar said.

Vista Land plans to invest around P18 billion to build 10 new shopping malls in the next two years—a massive expansion program that could catapult it to the ranks of the country’s leading mall developers. At present, VLL has 17 malls with a combined GFA of 910,000 sq m.

Online shopping is seen as competing with the physical malls for the youth market—the millennials who are naturally wired to the digital space. All shopping mall developers recognize this and are preparing for it.

“Online shopping is on the rise. With its increasing popularity, our malls need to constantly evolve to offer experiences that cannot be had online,” Magtibay said.

Megaworld’s Tan acknowledged that the “shift to everything digital and on demand” was bringing both challenges and opportunities.

“From creative visual merchandising to creating new and unique customer service strategies, engaging your customers in a world full of digital distraction is very important,” he said. TVJ

Going to ‘Simbang Gabi’? Dress for Mass, not for mall