Fly with class, comfort to North America through Tokyo with ANA 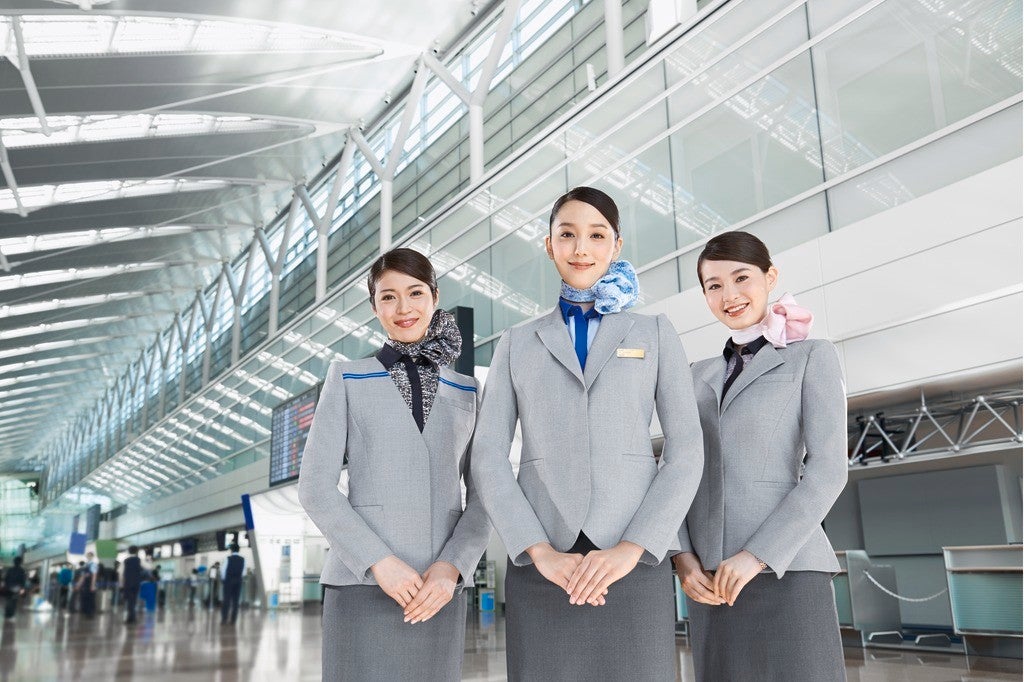 Thus, travel to North America from the Philippines is now more convenient and efficient for business travelers. ANA’s smooth connected flight via Tokyo to North America covers the principal business centers in the West Coast, Midwest, and the East Coast. It also includes major hubs for connecting easily to other North America cities.

ANA is a world-class airline from Japan which holds the top five-star rating in the authoritative Skytrax rankings of airlines and airports. It not only prides itself as 1 of the only 9 five-star airlines worldwide, but it has also been awarded as the ‘World’s Best Airport Service’ and the ‘Best Airline Staff in Asia’ at the Skytrax World Airline Awards this year.

True to their well-awarded name, ANA treats its business-class passengers to luxurious service and superior in-flight dining. The airline has earned a reputation for its sumptuous meals that encompass a wide range of options like vegetarian, halal, etc. Some flights departing from Tokyo even have quality meals specially prepared by ‘The Connoisseurs’, a group of internationally renowned chefs and restaurants from inside and outside Japan. 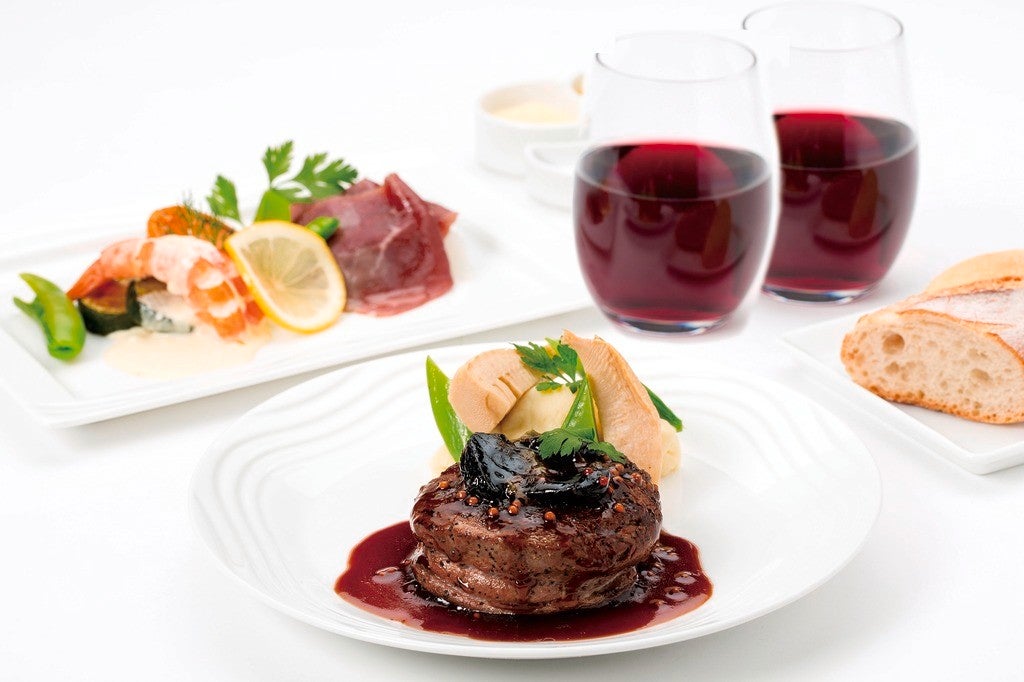 And because of ANA’s partnership with Philippine Airlines and other member companies of the Star Alliance, business travelers can still earn and redeem their miles when they choose to fly with ANA .

Designed for your comfort

Enjoy a comfortable flight with the signature hospitality of Japanese people with ANA. A restful travel is also assured as the airline guarantees its passengers of a quiet cabin, compared to that of other airlines. The staff of each flight with ANA gives the passengers an experience of “omotenashi”. 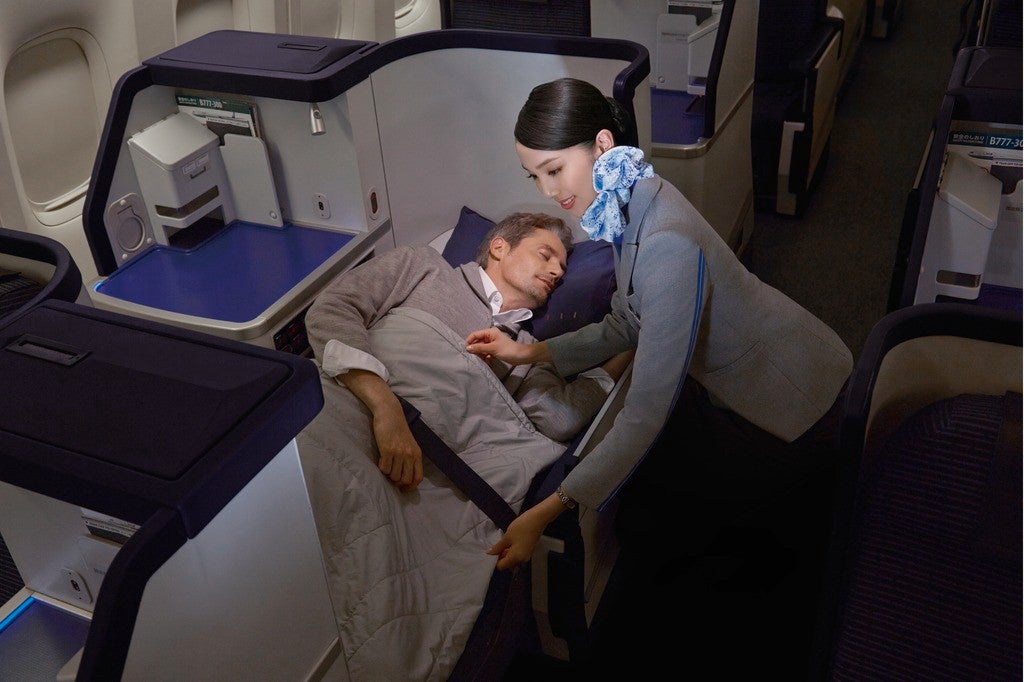 “Omotenashi”, which is loosely defined as the Japanese art of selfless hospitality, is at the core of the country’s culture. It is an act of welcoming a guest into your establishment with utmost dedication and being able to anticipate their every need. The Japanese consider this act as a privilege for the host and therefore give much attention, seriousness, and respect to their service.

To be honest, there are only a handful of airlines that are really worth recommending for 16-hour or so flights. And if we were to narrow it down to quality of service and experience provided to customers, then one airline is sure to stand out from the list.

All Nippon Airways, the premier Japanese airline which has been in operation for more than 50 years, stays true to their promise of superior flight experience. I could vouch for this claim because I was able to experience the ANA flight first-hand through my connecting flight to Los Angeles. Yes, this world-class airline brand now offers flights to New York and Chicago, an expansion to their already extensive network. 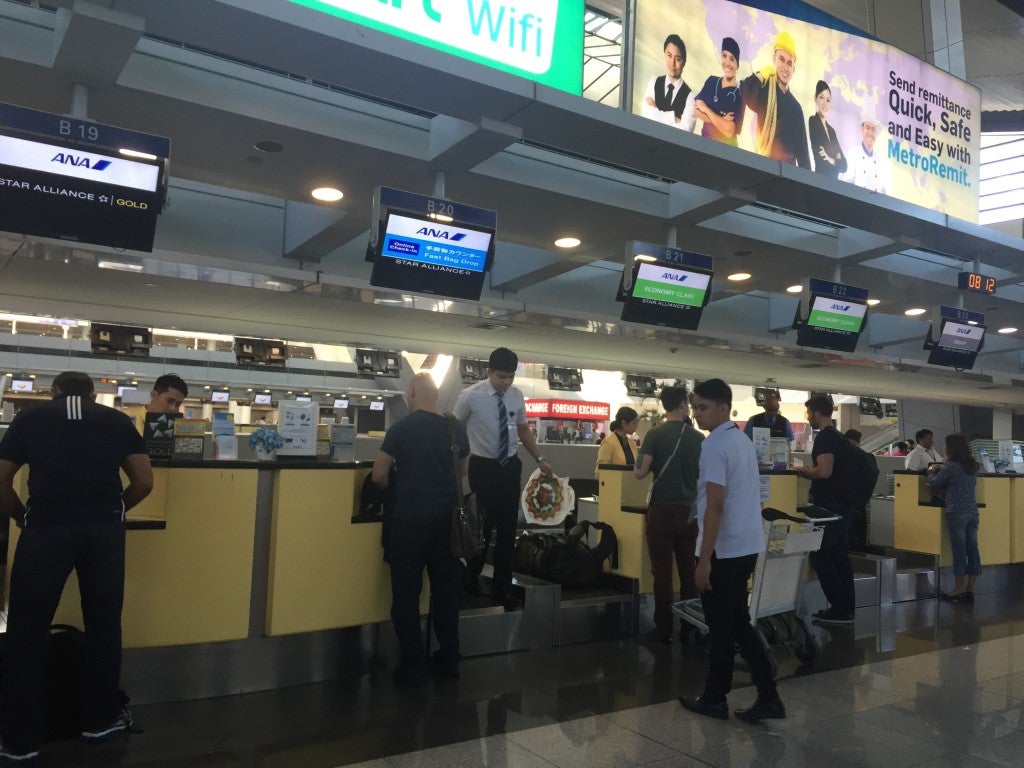 There are a lot of incomparable facets to how ANA does their operation—from your check-in to the minute you arrive at your destination, the service they give is truly remarkable, bar none. First of all, their flights depart from NAIA Terminal 3 which is new and is very close to Metro Manila so I didn’t have a hard time getting there. When I arrived at the counter, I was given blue bag tags for check-in and green bag tags for my carry on luggage- I took it as a sure sign of the airline’s commitment to securing the passengers’ luggage.

The staff were very friendly and willing to assist passengers with anything. Everyone was greeted by a smiling cabin attendant at the door. Communication was no barrier at all as ANA has a “Communication Board” tablet device used for multilingual communication between passengers and cabin attendants. Tagalog is offered as one of the languages of the Communication Board, so Filipinos will have no trouble communicating at all even if they are not well-versed in English. Also, the staff were very fluent in English. Once the plane took off, the cabin attendants changed into cute floral pink and blue uniforms with an apron and served the meals. We could truly feel the ‘omotenashi’ culture of Japan in their service.

I also enjoyed the in-flight entertainment during my trip. I was surprised to find that they already offered newly-released films to their passengers. 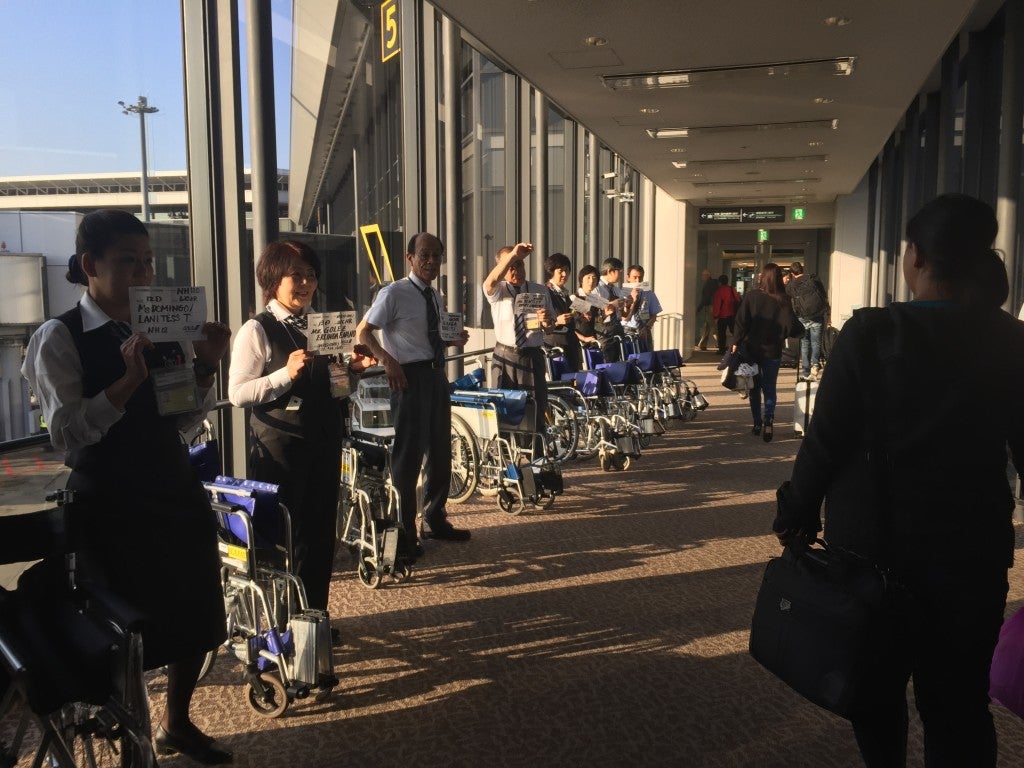 Upon landing in Tokyo, I saw a row of attendants with wheelchairs, ready to assist passengers in need. The service was just awesome! Then, I entered the ANA lounge. It was my first time so I really wasn’t expecting anything. I presented my boarding pass and entered the room, which was actually a huge hall! There was a buffet of snacks and drinks, tables and lounge chairs for passengers, a concierge, a money exchanger and a restroom. I decided to sit beside the window overlooking the airplanes. Businessmen were able to work because of the free wifi and outlets at every table. All I can say is: these ANA passengers are spoiled, and I’m loving it myself! 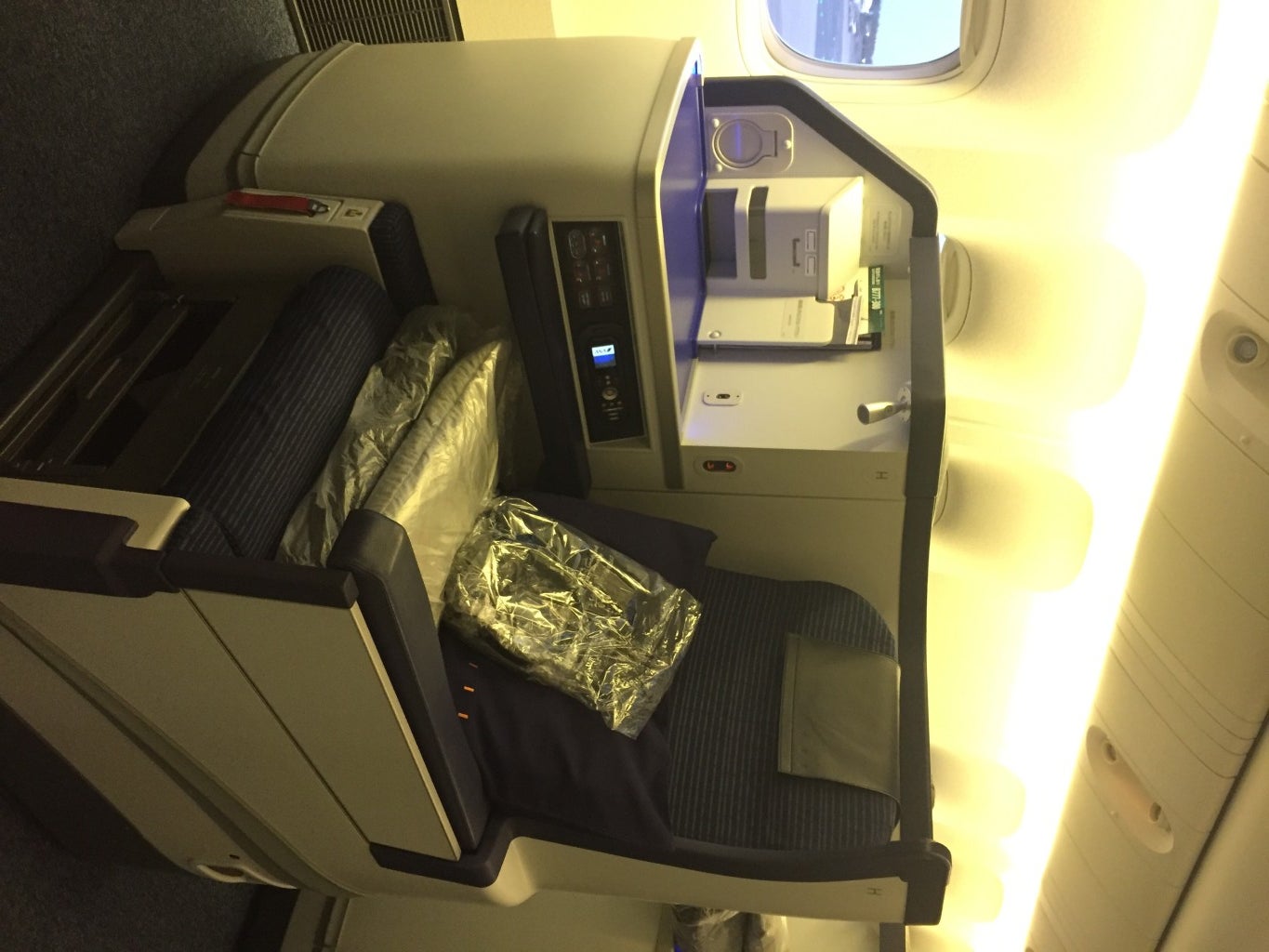 It wasn’t long before we got on the plane that would take us to the US. Again, the same friendliness of ANA flight attendants stood out. A man named Mr. Kitamoto introduced himself to me and told me that he will be assisting me for the duration of the flight. Inside the plane, the chairs were widely spread, and each had their own little nook with shelves, counters, pull-out tables, a TV screen (much bigger than the tablet-sized screens in Economy flights) and little gadgets like a remote control, seat adjustors, a coat hanger, plugs, plus a kit of headphones, slippers and grooming items. 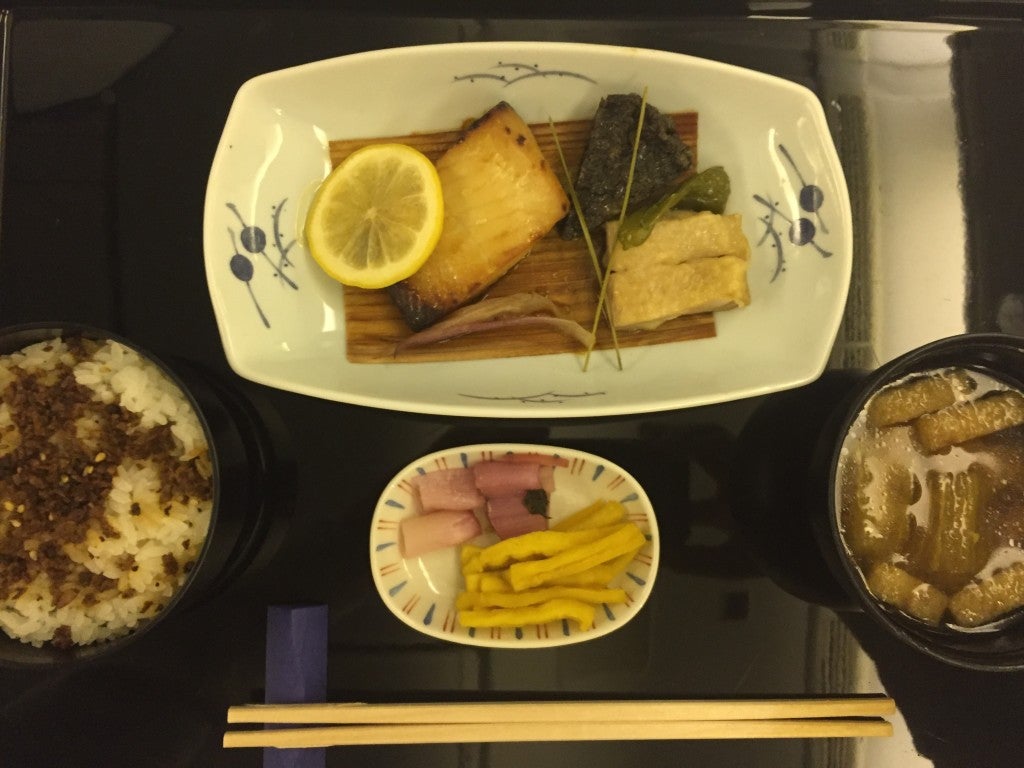 For our dinner, we were offered a menu for a full course meal. Passengers can choose from Japanese or International cuisine- seeing as I was aboard a premier Japanese airline, I decided to choose the former. They pulled out the table, placed a mini table cloth (I didn’t expect this on a plane!) and served the food one by one. First up, champagne. Mr. Kitamoto served it as if I was in a fine dining restaurant: he introduced the brand before pouring it for me. Then came the Amuse Bouchée of foie grase mousse, ham & tomato aspic, duck & apple tarte, glazed walnut, olives and cheeses. He described it as well, and added a little something extra: “This goes perfectly with your champagne!” And yes it did, especially the foie gras! Then the Zensai (assorted morsels), Nimono (simmered plate) and Otsukuri (selection of sashimi). Different tastes and textures in one serving, and quite amusing to eat one by one. After this course I could have stopped eating already–that is if it were another day. But it was a special day, and so I tried all of the dishes. The main course of halibut in miso sauce, with rice, miso soup and pickles.

Everything was great as expected with ANA. But when I sunk my teeth into the halibut, I was blown away! It was very soft and moist, and the flavor was really seeped into the fish. I was thinking to myself that this might be the best meal I’ve ever had, even comparable to real fine dining restaurants. And then, the perfect ending to a sumptuous meal: milk chocolate & mandarin orange mousse paired with coffee. And because of the privacy extended to all passengers, I was able to enjoy all this without any distracting noise from the cabin while I was watching a movie.

The next day, we arrived in LA. I must say I dreaded the 16-hour trip at the beginning. I mean what do I do, right? How do I sleep? Will I be comfortable? But ANA definitely changed all that. The stunning and cozy lounge back at Tokyo, the friendly flight attendants, especially Mr. Kitamoto and the business class team who were very attentive and helpful at all times, the extensive in-flight entertainment which I definitely enjoyed, the world-class menu–really scrumptious and well-prepared, and everything that ANA gives their passengers is really impressive. It felt like you have a home in a different place, with your own little space and hospitable people to take care of you. It could easily be my best trip ever, even if it’s also the longest. I will definitely say “yes” to another Manila to US flight in the future, as long as it’s with ANA.

Ready to fly with ANA? Visit them here to start your own wonderful journey.