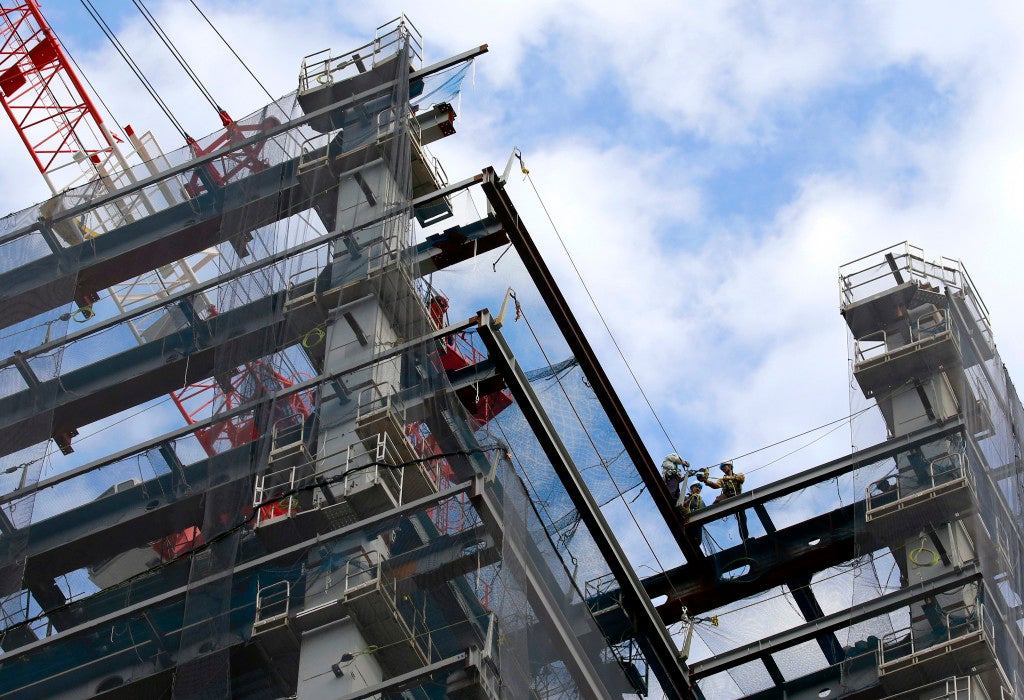 In this Oct. 31 photo, workers construct a building at Tokyo’s Nihombashi business district. Japan has reported its economy grew at a slower pace than earlier estimated in July to September, expanding at an annual pace of 1.3 percent. The figure released on Dec. 8 downgraded a preliminary estimate of 2.2 percent annual growth in the last quarter. Quarterly growth was 0.3 percent, down from the earlier reported 0.5 percent. AP

SEOUL, South Korea—Global shares rose on Thursday following upbeat trade data from China. Investors were looking ahead to a meeting of the European Central Bank later in the day.

CHINA TRADE IMPROVES: In China, exports grew last month for the first time in nine months while imports also rose in a sign of global and domestic demand are recovering. Customs data showed exports rose 0.1 percent to $19.7 billion, compared with a 7.3 percent fall in October.

ANALYST’S TAKE: The uptick in Chinese trade “reflects a strengthening in global demand, with recent business surveys suggesting that developed economies are on track to end the year on a strong note,” said Julian Evans-Pritchard of Capital Economics. “Most countries have yet to publish trade data for November but the other early reporters, Korea and Taiwan, also posted larger-than-expected pick-ups in export growth.”

JAPAN GROWTH DOWNGRADED: Japan’s economy grew 1.3 percent in annual terms in the July-September quarter, revised down from an earlier estimate of 2.2 percent mainly due to weaker business investment. Economists said the central bank is likely to keep its current lavish monetary easing intact for now, without pushing interest rates further into negative territory, because of the economy’s sustained expansion.

EURO WATCH: A decision by the ECB to not extend its stimulus program of buying 80 billion euros ($86 billion) in bonds a month past the current March deadline could add to concerns over Italy after its premier, Matteo Renzi, resigned Wednesday over the resounding rejection of constitutional changes he had backed in a referendum Sunday. “With less than four months until the expiry of the current QE program, the market is looking to the ECB to inject another boost to the market by extending the program beyond March,” said Jingyi Pan, a market strategist at IG in Singapore.

OIL: Benchmark U.S. crude oil rose 7 cents to $49.84 per barrel in electronic trading on the New York Mercantile Exchange. The contract lost $1.16, or 2.3 percent, to close at $49.77 a barrel in the previous session. Brent crude, the international standard, edged up 6 cents to $53.06 a barrel in London.