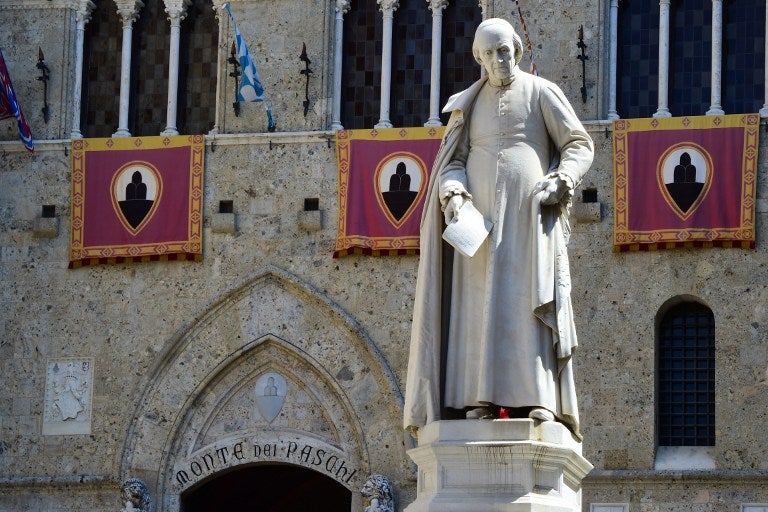 This file photo taken on July 2, 2016, shows a statue of priest Sallustio Bandini at Piazza Salimbeni, the headquarters of the Monte dei Paschi di Siena bank in Siena, Tuscany. Bandini is one of the first Italian economists. The fates of the world’s oldest bank and the Tuscan city of Siena in Italy have been tightly linked for over 500 years. But while Monte dei Paschi di Siena (BMPS) is clinging to hope a last-ditch rescue scheme will prevent it from being wound down after years of ills, the Renaissance city is having to learn to live without its patronage. AFP FILE

BMPS said it was asking for the extension from the end of December to mid-January because the political instability created by Prime Minister Matteo Renzi’s resignation has left investors reluctant to commit funds.

The Italian bank has lost nearly 85 percent of its market capitalization since the start of the year. It also emerged as the worst performer from European Banking Authority (EBA) stress tests in July.

The country’s third-biggest bank is currently trying to pull off a five billion euro ($5.38 billion) equity injection. Italy is preparing to recapitalize the ailing institution if it fails, according to reports.

The country’s third-biggest bank is currently trying to pull off a five billion euro ($5.38 billion) equity injection. Italy is preparing to recapitalize the ailing institution if it fails, according to reports.

BMPS said in a statement that it was “opportune — considering the change in circumstances — to ask the European Central Bank (ECB) for an extension to the authorized deadline until January 20, 2017”.

Renzi’s resignation has added to deep worries about the failure of the Italian banking sector — which features no fewer than 700 banks — to make meaningful progress towards consolidation.

Non-performing loans on their books amount to a combined 360 billion euros, roughly a third of the eurozone’s total bad debt. CBB