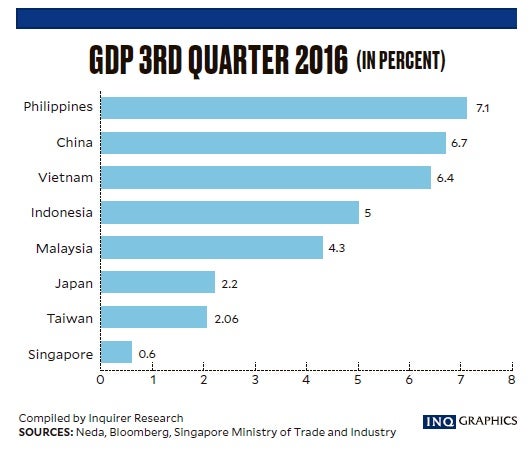 The Philippine economy expanded 7.1 percent in the first three months in office of President Duterte on the back of robust public infrastructure spending and private construction, and growth in agriculture.

An upbeat consumer spending, encouraged by low inflation and low interest rates, also drove the expansion during the July-September period of the gross domestic product (GDP) that made the Philippines the fastest growing economy in the region. GDP is the total value of goods produced and services rendered in a given period.

“This underscores that the Duterte administration offers more than war on drugs,” Presidential Communications Secretary Martin Andanar said in a statement.

“(W)e have a sound economic vision and agenda that will spur growth to benefit the lives of our countrymen, especially the poor and the marginalized,” he said.

The news surprised experts after Mr. Duterte sparked concerns among foreign investors over his controversial war on drug crime and a decision to pick fights with the United States and the United Nations on the issue.

“It was a surprise for the financial markets,” securities analyst Astro del Castillo of First Grade Holdings said, referring to the growth figure.

“It affirms our view that fundamentals remain intact despite the political noise,” he said.

The country’s stock market, which is at a seven-month low, rose 1 percent on Thursday, but the peso remains stuck near eight-year lows, with analysts blaming political developments as well as expectations the United States will raise interest rates.

The GDP growth was the strongest quarterly expansion since the 7.5-percent growth posted in the second quarter of 2013.

“We are the fastest growing among major Asian emerging economies that have already released data for the quarter. We are higher than China’s 6.7 percent, Vietnam’s 6.4 percent, Indonesia’s 5.0 percent and Malaysia’s 4.3 percent. India has not yet released their data,” National Economic and Development Authority Director Reynaldo Cancio told a press conference yesterday.

The economy needs to grow by only 3.4 percent in the fourth quarter to reach the lower end of the government’s “conservative” 6-7 percent GDP growth target for 2016, Cancio said.

While the growth of remittances by the country’s huge overseas work force slowed, this was balanced out by a 2.9-percent growth year-on-year in agriculture, reversing five straight quarters of decline caused by typhoons and drought.

The services and industry sectors registered growth of 6.9 percent and 8.6 percent, respectively, according to Philippine Statistics Authority data.

“From the demand side, investments continue to drive this economic growth, indicating its sustainability. Growth in investments for durable equipment remained strong. Private sector investments in construction grew significantly by 16.2 percent this quarter from last year’s 4.0 percent,” Cancio said.

He said public investment in infrastructure remained strong, with public construction expanding over 20 percent for the third quarter.

Household consumption also remained a pillar of strength for the domestic economy.

Finance Secretary Carlos G. Dominguez III attributed the robust third-quarter economic growth to “the Duterte presidency’s strong spending on infrastructure and the recovery of the agriculture sector from the prolonged El Niño-induced drought.”

“[This] means there will be no letup in its commitment to spend big on urban and rural infrastructure as a growth driver as well as on human capital and social protection to guarantee sustained high—and inclusive—growth,” Dominguez said in a statement.

“With the inflation outlook over the policy horizon also seen as manageable and within the government target range, there is really no need to make further adjustments to monetary policy levers at this time,” Tetangco said in a text message to reporters.

The business community expects the country’s strong economic growth to be sustained as long as the Duterte administration is able to adequately deliver on its 10-point agenda.

George T. Barcelon, president of the Philippine Chamber of Commerce and Industry, said the country’s strong macroeconomic fundamentals that helped boost GDP growth in the third quarter showed that Mr. Duterte’s controversial rhetoric had not done significant damage to the economy.

Peter Angelo V. Perfecto, Makati Business Club executive director, said the “growth momentum can be sustained if government can limit the noise and focus on maximizing the competitive advantages from our young workforce, tapping on the potentials of agriculture, pursuing tax reform, delivering on infrastructure development and building peace in Mindanao and across the country.” —WITH REPORTS FROM AMY R. REMO, MARLON RAMOS AND AFP