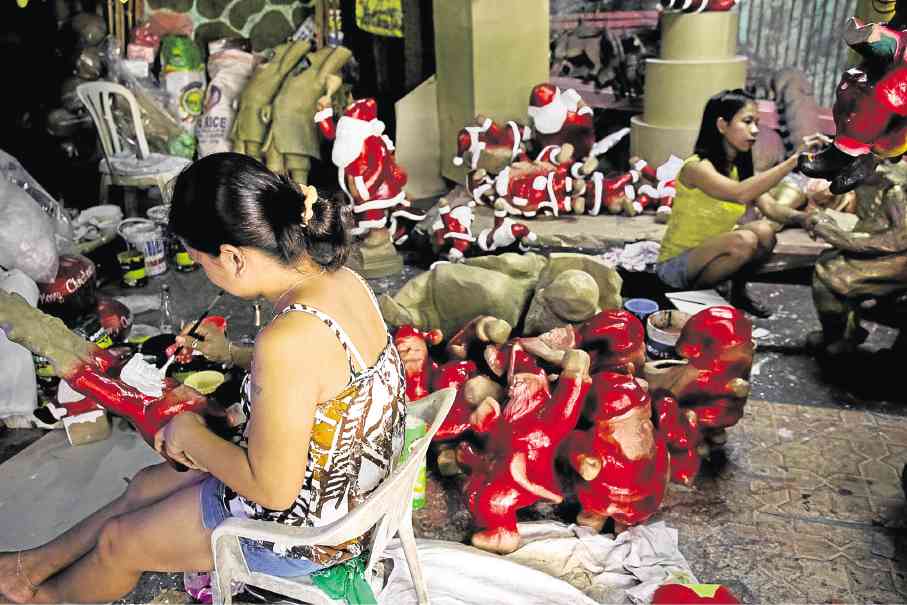 Orders for Christmas decoration made of papier-mache usually start trickling in by September. But this year, sales have been uncharacteristically sluggish.

PAETE, LAGUNA—At this time of year, Santa Claus figures made from papier- mache line the storefronts of local shops in this Laguna town, dubbed the woodcarving capital of the Philippines.

But “taka” figures of Santa Clause and his reindeer as well as other Christmas ornaments have yet to fly off the shelves this time around, as business has remained sluggish a month until Christmas.

“Business is slow this year. I had more business last year,” shares Tina Castro, co-owner of Jesus de Nazareno Handicraft, one of the bigger shops selling mainly wooden statues of saints of the Catholic Church and other religious icons in Paete, about 100 kilometers south of Metro Manila.

“Other towns now have [papier mache products], too, and maybe, some people think Paete is too far,” Castro says.

But shop owners still hope business will soon pick up.

Taka making is still mainly a cottage industry in the town, says April Castro of the Paete Tourism Culture and Arts Office.

Most taka makers sell to buyers from Metro Manila, other Laguna towns and nearby provinces like Rizal.

Small and medium Santa figures sell for P100 to P230 apiece, while bigger ones cost upwards of P1,000.

Toy maker Maria Bague, known in Paete as Maria Piday, is the acknowledged pioneer in taka making, starting in the 1920s.

Back then, Bague was in charge of arranging the Nativity Scene in the church, which consisted of wooden sculptures.

Wooden cherubs would be hung above the Nativity Scene, but because of their weight, would often fall to the floor.

This gave Bague the idea of making lightweight paper figures molded out of the wooden statues.

Taka is made by pasting, using rice starch, old newspapers or brown paper to a wooden mold or “takaan,” which taka makers source from local woodcarvers.

After the mold had been covered in paper, the taka would either be sun- or oven-dried.

Smaller taka makers leave their products out to dry under the sun.

It would take at least half a day to sun-dry the taka, says Nora Cadawas, 69, one of the oldest taka producers in Paete.

Once dry, the taka is cut out of its mold.

It would be pasted together with several layers of paper and dried again before it is painted and glazed.

The taka eventually became part of the town’s folk art, which was popularized by Tere Afuang in the 1970s.

Taka making has since become a major source of income for the locals, who sell their works of art to nearby towns during local festivals.

The craft has been passed down from generation to generation, and some continue to nurture the family business, like Sarah Matienzo, 29, who owns Matienzo’s Papier Mache, the largest taka producer in Paete.

Because it takes time to produce taka, bulk orders for Santa Claus figures start to come in as early as April, says Ma. Theresa Sabeñano of the Well & Thess Handicrafts.

Taka producers are busiest starting September, in time for the holidays.

Cadawas, who is credited for creating Paete’s iconic red taka horses, laments, however, that business has not been as good this year, saying there had been days when she did not make a single sale.

Some business owners, however, say they still manage to make a decent profit.

It helps, too, if they can innovate and diversify like the Matienzo family who produces taka cartoon characters, other animals and dinosaurs.

They have also tapped other clients, like event stylists who order customized papier mache figures, to widen their market.

But they are still pinning their hopes on the possibility that Filipinos are just late getting into the Christmas spirit, and will soon flock to Paete to get distinctly Filipino Christmas decoration. 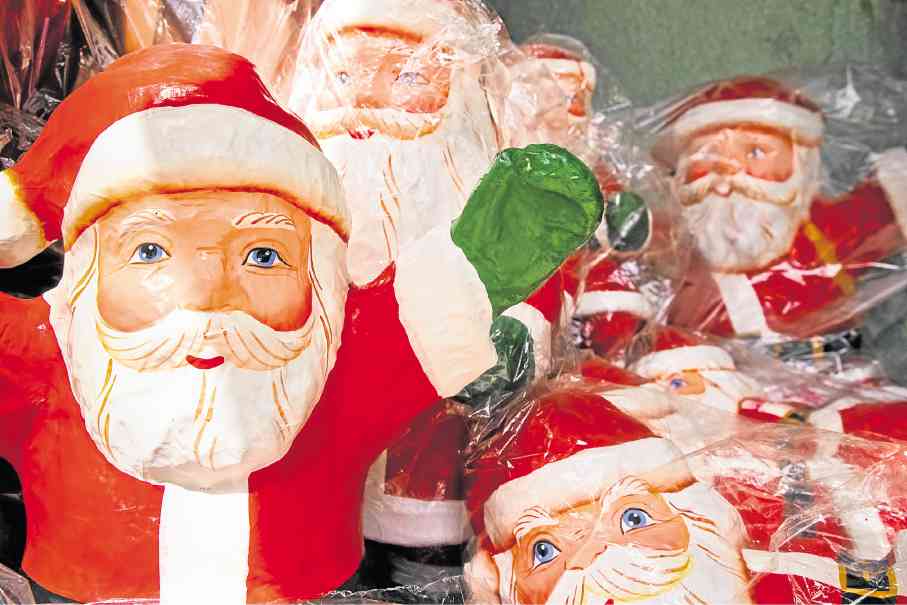