And the 2016 Bell Awardees are... | Inquirer Business
Close
menu
search

“Admittedly, companies are in different stages in their appreciation and adoption of corporate governance. We have seen the early adapters evolve from treating corporate governance as a requirement to inculcating good governance in their company culture,” PSE chair Jose Pardo said during his opening remarks.

“Good corporate governance is not a function of company size, whether in terms of market capitalization or workforce count. Rather, it is a product of commitment and initiative. Commitment shows the degree of responsibility embraced by the entire company to uphold transparency and accountability to champion the welfare of the company stakeholders. While commitment may result to good corporate governance, it takes initiative to practice a brand of governance that is way above what the standards require,” Pardo added.

Sy family-led China Bank has bagged the Bell Award every single year since the annual awards were created by the PSE five years ago. This is so far the only listed company that holds the five-peat bragging right. 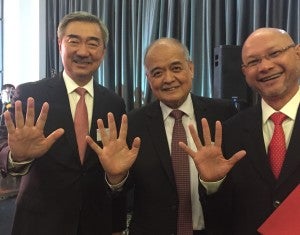 China Bank’s Hans Sy, Ricardo Chua and Alex Escucha give the number 5 sign to indicate the number of times the bank has won a Bell award

Ayala-led Manila Water won for the fourth time while Philex Mining, the local mining arm of First Pacific group, is an awardee for the second straight year.

RS Lim has won the Bell award for the fourth straight year while Deutsche Regis has won for the third consecutive year. Credit Suisse and Macquarie were both awardees in 2015.

The PSE launched the Bell Awards in 2012 to give due distinction to publicly listed companies and trading participants that have excellent corporate governance programs and practices.

Trading participants, on the other hand, were evaluated based on their performance in regulatory audits and compliance with market regulations and trading rules.

Read Next
DMCI nets P9.2B
EDITORS' PICK
Rare earth metals at the heart of China’s rivalry with US, Europe
Kai Sotto continues to inspire Filipinos by sharing his passions and stories with Smart Prepaid
G7 rivals China with grand infrastructure plan
PNP, PDEA destroy P25.8M worth of marijuana in Kalinga
Ahead of ONE: Full Blast II, Mongkolpetch warns Elias Mahmoudi: ‘Watch out for my fists’
Alex Eala wins Grand Slam on Independence Day: ‘I hope I made my contribution to the country’
MOST READ
Chel Diokno, Bro. Eddie, Ate Vi decline 1Sambayan 2022 poll nomination
1Sambayan names 6 choices to pit vs Duterte’s anointed in 2022
Groups slam Duterte ‘surrender’ to China
G7 rivals China with grand infrastructure plan
Don't miss out on the latest news and information.