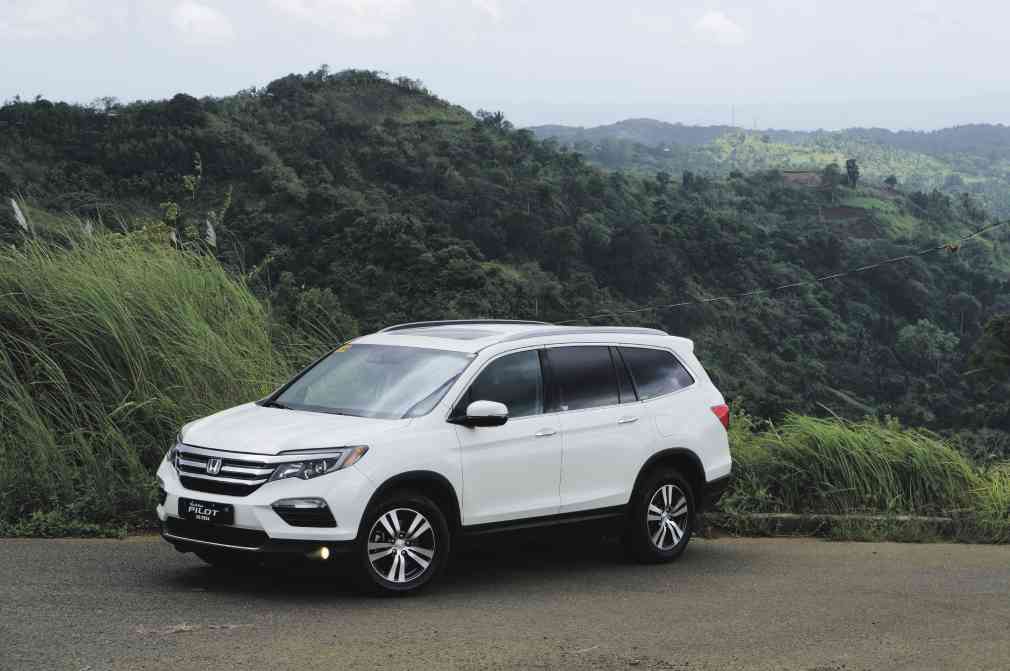 Power is delivered from a 3.5-liter direct-injected V6, one of the newer Earth Dreams engines.

When people say “Muricaaa!,” it means the best of what America stands for: V8s, muscle cars, the land of the free, apple pie, etc.

But if you were to truly look and listen to the Zeitgeist of America (and the rest of the world) today, everyone wants SUVs: large, roomy.

I would have added the adjective gas-guzzler, but even today, Americans put value in efficiency and environmental friendliness.

Built in Honda’s Lincoln, Alabama production facility in America’s deep south, the Pilot shares its platform with the upscale Acura MDX mid-size SUV and the Accord executive sedan.

The MDX dukes it out regularly with the Lexus RX as the top-selling mid-sized SUVs in their segment, while the Accord is a stellar world-class sedan, so you know the Pilot’s roots are of good, sturdy stock. 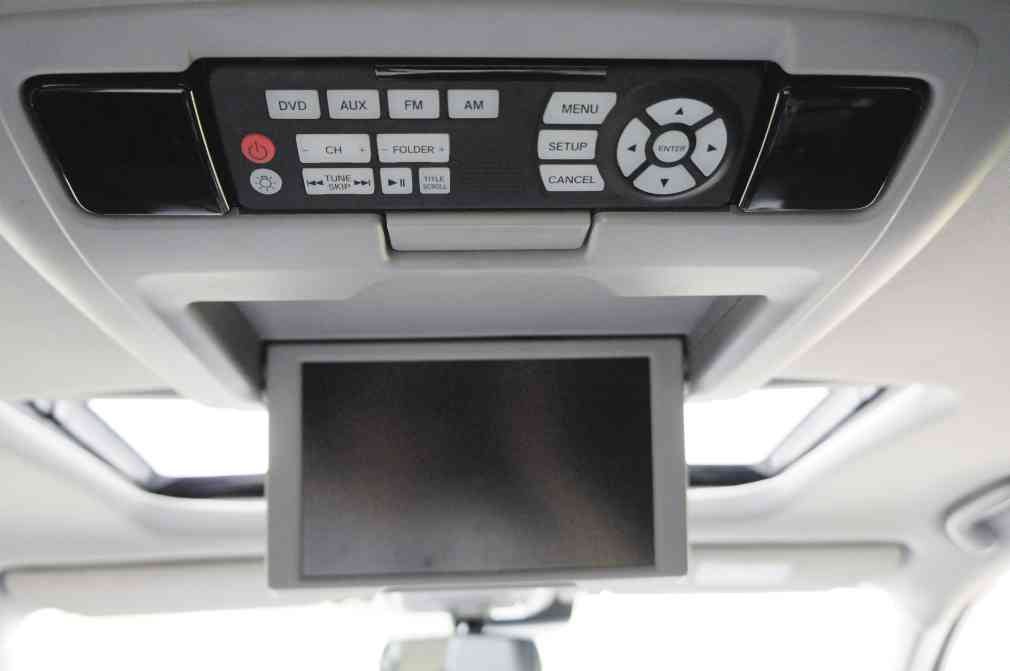 Honda has integrated a frame rail around the chassis to allow the Pilot to forge ahead for light to medium off-roading duties, and to tow vehicles and boats, another American past time.

Power is delivered from a 3.5-liter direct-injected V6 engine equipped with VTEC, outputting a healthy 284 hp and 353 Newton meters of torque.

It is one of the newer Earth Dreams engines that uses many cutting edge materials, techniques and technologies to help minimize fuel consumption and exhaust emissions while providing more grunt to power-hungry SUV drivers.

To help reduce fuel consumption, the third generation Pilot is also 300 lbs lighter than its predecessor, and uses some aluminum and magnesium parts to further reduce weight. 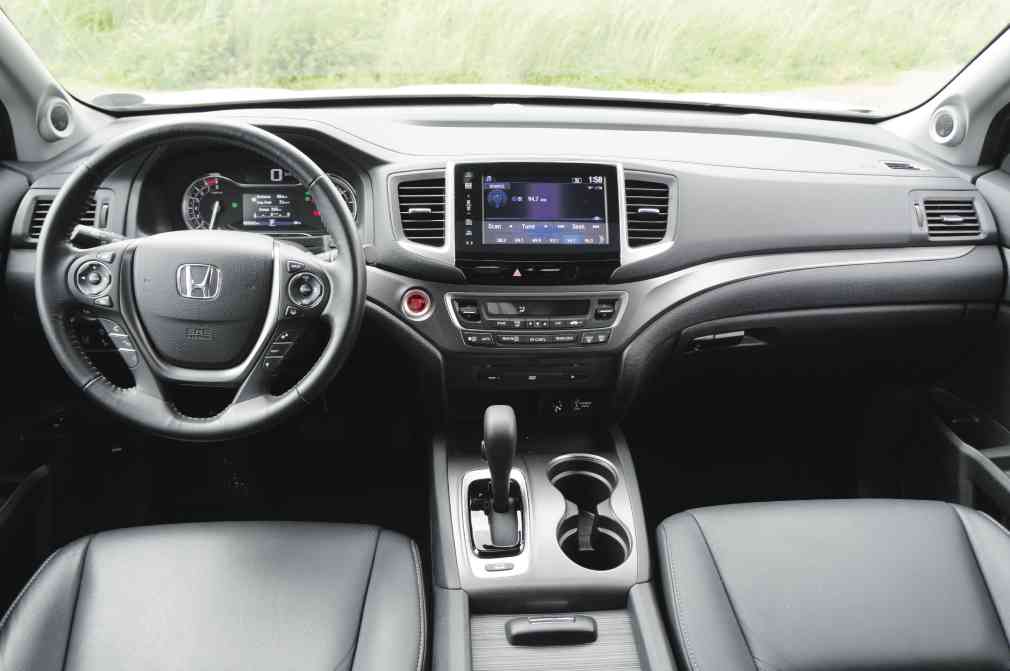 Dashboard together with the impressive infotainment system.

All told, the heaviest Pilot weighs in at 1,985 kg, impressive given its size and dimensions.

Its most obvious competitor would be Ford’s Explorer, and would it have been still around, Subaru’s Tribeca, which shares the Pilot’s lineage: Japanese in name, but American in birth and orientation.

The Pilot powers all four wheels via a 6-speed automatic, but the transverse V6 engine normally drives the fronts exclusively until the rear wheels start slipping.

Being predominantly front-wheel drive, this helps save on fuel and makes it safer, more predictable to drive for most soccer mom types.

In the US and other markets, there is an option for a nine speed automatic transmission, and no, that is not a typo! This gives the Pilot better acceleration and fuel efficiency on the highway.

Exterior wise, the Pilot looks much better compared to its predecessor. It is generically Honda, like an overgrown CR-V. But some of the proportions look quite curious.

The  interior is plush, but also lacks in pizzazz. But it’s not meant to be an out-and-out luxury SUV. It’s a workhorse, first and foremost, albeit a very expensive one at that.

Full LED headlights and DRLs help give it a bit of attitude on the street, giving it a futuristic stare on the road.

While it may lack exterior bling, there’s real depth of talent and ability beneath the Pilot.

The ride is soft and cushy, and the steering light and easy. The drive remains committed to the clipping points and braking points.

The Pilot is surprisingly enjoyable to hustle. You need to be careful, controlled and well-measured with your braking and steering.

The direct-injected V6 delivers very good low-end grunt, but curiously trails off noticeably at the top-end.

Nonetheless, it’s not meant to be a screaming B- or K-Series 4-banger, but a grunty chugger of a sweet six.

And yes, that V6 engine is ever so smooth and creamy in traffic and cruising on the highway, it might as well be a hybrid in electric mode.

The interior is plush and comfortable. Though lacking in bling as mentioned earlier, everything is well laid out and within easy reach. There’s very good room for five adults, and the third row seats allow you to carry two additional adults in a pinch on short to medium-length drives.

Moms will love it, the kids will love it as well, particularly as there is a rear seat entertainment system. The kids can plug in a gaming console or watch videos out back without the driver or front passenger getting distracted.

There’s a 7-speaker surround sound system, too, which plays my MP3 files very decently even at full blast.

The steering wheel adjusts for reach and rake, and has buttons for cruise control and the infotainment system for ease of use.

Truly, the Pilot is one of the best vehicles to use when stuck for hours behind the wheel, be it gobbling up miles serenely on a very long drive (think Manila to Cam-Sur, almost 500 km in a single day) or stuck in Edsa traffic on a payday weekend late in the evening.

The electrically operated front seats are some of the plushest, most comfortable seats that still offer decent support when hustling the Pilot, as I did on my weekly drives to Tagaytay, or enjoying the fast flowing roads going to Lemery, Batangas.

On these roads, you forget that you’re driving a huge 7-seat SUV as the Pilot flows through corners, and the grunty engine delivers the right type, if not amount, of feral noises when pushed hard as you power out of tight, uphill bends.

Off-road, and at least on the very light trail I take my test units to, the Pilot was more than capable.

Ground clearance is a respectable 188 mm while flood fording depth is quite decent at just under 500 mm, impressive for a 7-seat SUV more inclined towards paved roads.

Despite the soft suspension setting, the Macpherson-strut front and multi-link rear give ample stability and control when things get fast and a tad frenetic.

Ultimately, price determines what sells. At P3.38 Million, the Pilot is artificially expensive in the Philippines (no JPEPA incentive because it isn’t made in Japan) due to taxes.

The Explorer has more bling, is cheaper and looks sexier. But the Explorer is really thirsty, is more difficult to drive because of its unusual width, and isn’t as plush as the Pilot.

In the end, you buy the Pilot because you prefer simple, understated comfort over anything else. And definitely, the Pilot feels first class when covering endless miles.

No wonder that in America, with their long and flat freeways, the Pilot and its ilk reign supreme.