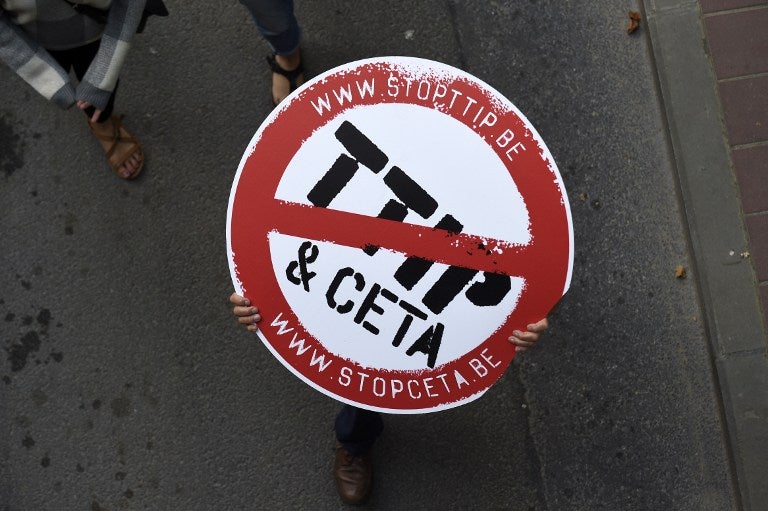 This file photo taken on September 20, 2016, shows a man holding a placard depicting a no entry sign with the TTIP and CETA logos, during a demonstration outside the European Union headquarters in Brussels, to protest against huge transatlantic trade deals linking Europe with Canada and the United States. The head of the European parliament and Canada’s trade minister held last-ditch talks on October 22, 2016, aimed at salvaging a trade deal threatened by a Belgian region’s refusal to sign on.  AFP PHOTO

BRUSSELS, Belgium — Belgium’s Wallonia region on Sunday dealt a fresh blow to a proposed EU-Canada trade deal, rejecting a 24-hour ultimatum from the bloc to end its objection to the agreement.

In an embarrassment for the 28-nation EU, Belgium has so far been the only member not to sign up to the CETA trade deal, blocked by French-speaking Wallonia, which has refused to endorse it.

Paul Magnette, the leader of the Wallonia region, told the Belga news agency that an “ultimatum is not compatible with the exercise of democratic rights”.

The EU has warned that unless Belgium makes its position clear, it will cancel a summit on Thursday to sign the accord with Ottawa, and indicated that it expected Prime Minister Charles Michel to come up with an answer on Monday.

Paul Magnette, the leader of the Wallonia region, told the Belga news agency that an “ultimatum is not compatible with the exercise of democratic rights”.

Magnette hit out at the EU, despite efforts by the bloc to provide reassurances to his government over investment protection — one of the major sticking points in negotiations between Brussels and Wallonia.

One European diplomat said that the reassurances “responded to all of Mr Magnette’s concerns”.

Tusk will ask Michel “one simple question: will Belgium be in a position to sign the agreement on Thursday, yes or no?” said the European source.

A European source said European Council President Donald Tusk would call Michel on Monday afternoon or evening to see if the deal can be salvaged.

Tusk will ask Michel “one simple question: will Belgium be in a position to sign the agreement on Thursday, yes or no?” said the European source.

The EU Council chief will also call European Commission President Jean-Claude Juncker “to share an assessment of where we are,” and lastly Canadian Prime Minister Justin Trudeau “to decide whether to maintain the summit”.

The source added that any decision would be made jointly by Tusk and Trudeau.

Canada’s trade minister Chrystia Freeland flew home from Brussels Saturday saying the ball was in the EU’s court after talks on Friday failed to overcome the differences.

The CETA — or Comprehensive Economic and Trade Agreement — would link the EU market of 500 million people with the world’s tenth biggest economy.

The deal is opposed by anti-globalization groups who say it is a test model to push through an even more controversial EU-US trade agreement called TTIP, talks on which have also stalled.

Sebastian Dullien, a senior policy fellow at the European Council on Foreign Relations, criticized the Commission for its role in the failure of negotiators to secure an agreement on the deal.

“The European Commission carries part of the blame because it didn’t quickly seek a dialogue with doubters. And for this type of deal, you need a large consensus,” he said.

The deal is opposed by anti-globalization groups who say it is a test model to push through an even more controversial EU-US trade agreement called TTIP, talks on which have also stalled.

Wallonia has some support for its position elsewhere in Europe.

On Saturday, 8,000 people including young people, farmers, union leaders and entrepreneurs joined a rally in Amsterdam in a show of solidarity, organizers said.

They held banners saying “Our world is not for sale” and “Stop these bad trade treaties”.

Wallonia has also enjoyed support from activist groups like Greenpeace which charged that the deal risked satisfying “corporate greed” and trampling on people’s rights and health standards on both sides of the Atlantic.

British Prime Minister Theresa May on Friday dismissed warnings that the EU-Canada deal raised serious questions about whether London could strike a similar agreement with the bloc after Brexit. CBB