Philippine regions have capital cities. So does each province. For instance, Koronadal, popularly known as Marbel, is the regional capital of Soccsksargen, and it is also the capital of South Cotabato.

However, the trading hub of the region is General Santos City, which hosts an international port and airport.

General Santos is a well-known case, and perhaps, a special one.
Other cities/towns are not well-known.

Here are other examples of trading hubs:

Solano, Nueva Vizcaya (population: 59,517 in 2015) is the main commercial and financial center of the province. It is home to the Nueva Vizcaya Agricultural Terminal, which trades vegetables. The capital, Bayombong (population: 61,512), is five kilometers (km) away.

Santiago and Cauayan, Isabela. The province is the rice and corn granary of Luzon. Separated by less than 50 km, Santiago (population: 134,830) and Cauayan (population: 129,523) are the principal commercial centers. Cauayan hosts a city airport with connections to Manila. Santiago is a strategic place for crop harvests from Ifugao, Kalinga, Quirino, Nueva Vizcaya, and parts of Isabela. Ilagan (population: 145,568) is the capital.

Candon, Ilocos Sur (population: 60,623) is the country’s largest producer of Virginia tobacco and the trade center of southern Ilocos Sur. Vigan (population: 53,879), the capital, is 41 km to the north.

Urdaneta, Pangasinan (population: 132,940) is strategically located in the central part of eastern Pangasinan en route to Ilocos Region and Baguio City. The province is a key supplier of rice, corn, mango and milkfish. Urdaneta’s Livestock Market is the largest cattle market in Northern Luzon. 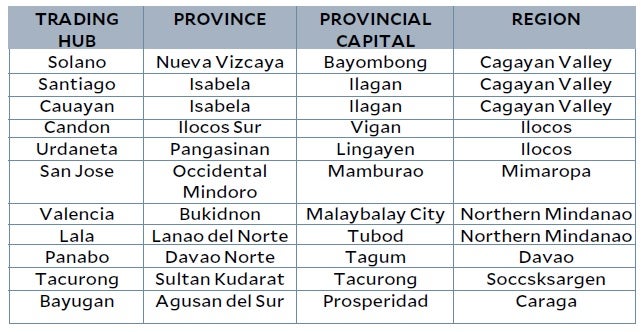 San Jose, Occidental Mindoro (population: 143,430) is the trade center of the province. It hosts a port and an airport with connections to Manila. The province is a key producer of rice and salt. The port receives dried seaweeds from Palawan and Antique for trans-shipment to Manila. Aquaculture is well-developed. The provincial capital, 180 km to the north, is the sleepy town of Mamburao (population: 42,975).

Valencia, Bukidnon (population: 192,993) is the trade and commerce center of the province because of its central location. It is about 40 km from Malaybalay (population: 174,625), the capital, and 120 km from Cagayan de Oro City. Agricultural crops in the area include rice, corn sugar, and banana.

Lala, Lanao del Norte (population: 67,727). The main crops are rice, corn, and coconut, and fishery products from marine fishing and fishpond operation in the Panguil Bay. It is the center of trade in the western Lanao del Norte. Tubod (population: 47,165), the capital, is 27 km to the northeast.

Panabo, Davao del Norte (population: 184,599) is the banana capital of Asia with more than 10,000 hectares planted to Cavendish banana for export. It also hosts a large mariculture park. The modern Davao International Container Terminal is located there, where six international shipping lines make regular calls. Tagum (population: 259,444), the capital, is 22 km to the north. Meanwhile, Davao City is 28 km to the south.

Tacurong, Sultan Kudarat (population: 98,316) is strategically located at the center of Soccsksargen region. It is the commercial, education, and recreation center of the area. The province is a key producer of rice, corn, coffee and palm oil. Isulan (population: 90,682), the capital, is 11 km away.

Bayugan, Agusan del Sur (population: 103,202) is a key trade center and a major rice producer. It is also known for cutflowers. The capital, Prosperidad (population: 82,631), is 30 km to the south.

Trading hubs have emerged, independent of the capitals, in part due to their strategic location and resource endowments. Private sector dynamism is a major impetus.