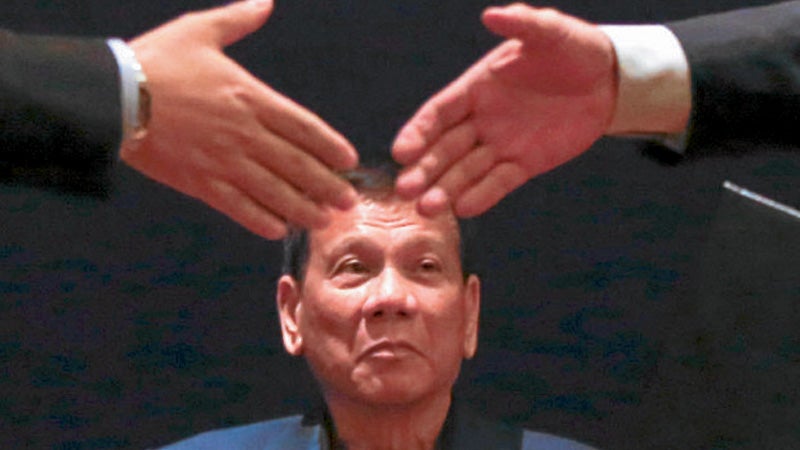 IT’S A DEAL President Duterte oversees the signing of agreements between Filipino and Chinese businessmen during his state visit to China last week. —MALACAÑANG PHOTO

President Duterte’s style of policymaking—perceived to be “driven by impulse rather than study and full consultation”—is causing “much unease” in the business community, New York-based think tank Global Source said.

“Despite his economic managers’ repeated guidance for investors to look at the fundamentals rather than ‘political noise,’ the President’s loose speech cannot but give investors pause and his anti-Americanism is fueling leftist militancy and empowerment that, if left unchecked, would have real business consequences,” it said.

Some of the consequences noted are in the form of labor and land conversion policies, as well as mining environmental activism.

“For now, we are taking his fiery rhetoric as driven by (apart from personal history) needed rebalancing in foreign relations in light of the frozen state of relations with China under the Aquino administration,” Global Source said.

“After what looks like a far swing to the left, we expect the pendulum to, down the road, find its center. After all, a leader cannot stray too far away from the mindset, sentiment and aspirations of his people.”

Global Source published the commentary following Mr. Duterte’s bold declaration of “separation” from the United States, both in military and economic aspects during his state visit to China last week.

The President dropped the bombshell during a meeting with Chinese and Filipino, saying: “Your honors, in this venue, I announce my separation from the United States [applause] both in military, so—not in the social [garbled] both the military but economics also.”

He added that he was realigning with the ideology of China and Russia and that “there are three of us against the world.”

But as soon as he landed on Philippine soil on Friday night, he clarified that he wouldn’t cut diplomatic ties with the United States but merely pursue a more independent foreign policy.

Earlier, his spokesperson, Ernesto Abella, had given assurance that the government would not renege on existing deals and treaties, while exploring new alliances. Economic managers took the statement to mean that the Philippines was moving toward regional integration.

“We will maintain relations with our partners but we would revive the stronger integration with our neighbors. We share centuries of trading, similar culture and a better understanding with our region,” said Trade Secretary Ramon Lopez, who announced a total of $24-billion investment and financing deals from China at the end of the four-day state visit.

Global Source noted that when Mr. Duterte said last month that he was canceling military exercises and other cooperation with the United States, the general reaction even from inside the government was, he couldn’t possibly have said that or even if he did, it couldn’t possibly be what it sounded like.

“And after the dutiful 72-hour news cycle for the President and his men to clarify what was said, it turned out that what he wanted was for the country to craft an independent foreign policy, a sensible posture considering what many political analysts deemed an overly pro-US stance adopted by the previous administration,” the think tank said.

It noted that the President kept on his anti-US rants, “seemingly intent to outdo himself each time he opened his mouth.”

In Beijing, the anti-US rhetoric intensified as Mr. Duterte devoted a great deal of time criticizing the United States in all three speaking engagements—his keynote address to the Filipino community in China, the Philippines-China Trade and Investment Forum, and the Philippine Chamber of Commerce and Industries-Federation of Filipino-Chinese Chambers of Commerce & Industry Inc.

“Given the President’s record in Davao as a pragmatic politician supportive of business, we firmly believe that what he said could not possibly have meant ending economic ties with the US which last year amounted to $25 billion in goods and services trade, with direct investments reportedly reaching $4.7 billion and remittances coming from US banks totaling $8.4 billion,” Global Source said.

“It could hardly have meant a military divorce either, at least not immediately with the two countries having three official defense agreements in place, one of which, the Mutual Defense Treaty, was ratified by the countries’ respective Senates,” the think tank added, noting, however, that joint patrols with the United States in the West Philippine Sea/South China Sea had already been suspended.

Global Source said the President could have meant that he would henceforth drop any official US aid that would require him to pay heed to the West’s concern about human rights —“an issue that he is hypersensitive to and takes personally.”

At the confirmation hearing of the President’s defense secretary, the think tank noted that the Senate panel had been told that “the President has been issuing statements without consulting his Cabinet.”