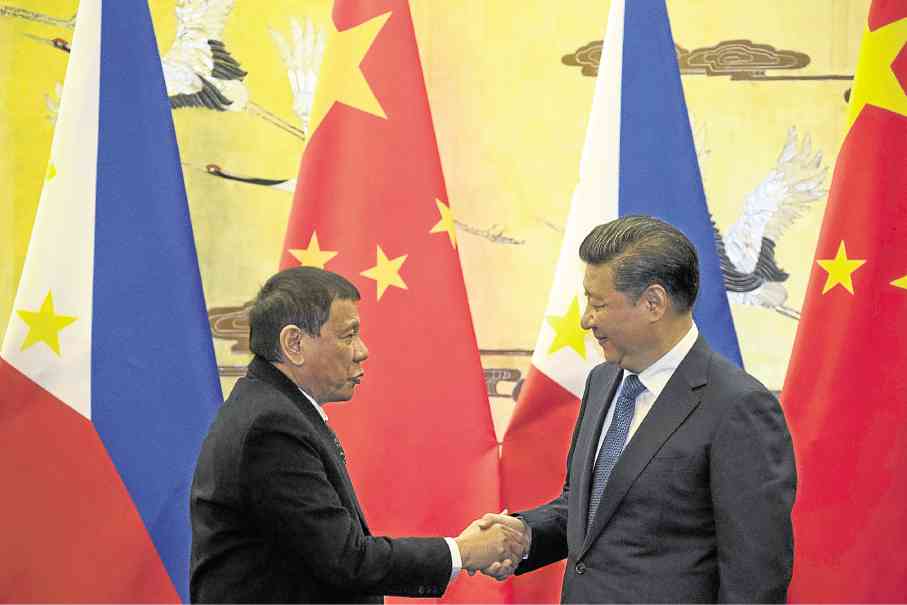 BEIJING—For agreeing to return to the negotiating table to settle a dispute in the South China Sea, the Philippines is getting $9 billion in soft loans from China, part of $13.5 billion in deals signed during President Duterte’s visit to Beijing this week.

Encouraged by the apparent success of his trip, Mr. Duterte announced his “separation” from the United States on Thursday, declaring it had “lost” and he had realigned with China.

Addressing a group of Chinese and Filipino businessmen after his talks with Chinese President Xi Jinping, Mr. Duterte said relations with the United States had reached “checkmate.”

READ: ‘Time to say goodbye,’ Duterte tells US during visit to China

“I’ve realigned myself in your ideological flow and maybe I will also go to Russia to talk to (President Vladimir) Putin and tell him that there are three of us against the world—China, Philippines and Russia. It’s the only way,” he said.

“I have separated from them. So I will be dependent on you for all time. But do not worry. We will also help as you help us.”

Manila and Washington are bound by the PH-US Mutual Defense Treaty in force since 1951.

Mr. Duterte cannot scrap the treaty on his own. Abrogation of the treaty requires action by the Senate.

Xi and Mr. Duterte oversaw the signing of 13 agreements and memorandums of understanding after their talks at the Great Hall of the People in Beijing on Thursday.

The agreements included the establishment of so-called Joint Coastal Guard Committee on Maritime Cooperation as a prelude to cooperation in the heavily disputed South China Sea.

“In this visit, bilateral relations have fully recovered and the two countries will return to the track of dialogue and consultation to address maritime issues,” Chinese Vice Foreign Minister Liu Zhenmin told reporters after the signing of the agreements.

Liu said China welcomed the Philippines’ participation in its so-called Maritime Silk Road and committed to take an active part in the development of infrastructure, agriculture and finance in the Philippines.

He said Xi agreed to lift travel advisories issued a few years ago to Chinese citizens traveling to the Philippines.

$9B in soft loans

The Inquirer learned that, during the talks, Xi committed $6 billion in soft loans to the Philippines from the Chinese government, while another $3 billion in credit facilities would be made available by private Chinese banks.

Other deals signed were the Agricultural Cooperation Action Plan 2017-2019; cooperation on animal and plant inspection and quarantine; conduct of feasibility studies for major projects, and production capacity and investment cooperation.

They also agreed to cooperate on transportation and infrastructure development and to financing cooperation between the Export-Import Bank of China and the Philippines’ Department of Finance.

The two governments also agreed to share information and to cooperation between the Narcotics Control Bureau of the Ministry of Public Security of China and the Philippine Drug Enforcement Agency, another boost for Mr. Duterte’s war on drugs.

Bank of China will open on Friday a $3-billion credit facility for Philippine industries and infrastructure, in a deal to be signed at the close of Mr. Duterte’s visit.

Businessmen from the Philippine companies described the deal as “nonbinding.”

“They want to give us a credit line for any use we may have for it,” one company official said. “It will most likely be [loaned out] at market rates,” he said.

Eight Philippine conglomerates and corporations will enter into an agreement with Bank of China for the credit facility.

The credit deal will be signed at Bank of China headquarters in Beijing.

After overseeing the signing, Mr. Duterte will fly back to Davao City. He is expected to arrive there at 10:45 p.m.

Liu said that after the talks between Xi and Mr. Duterte, China resumed giving permits to 27 Philippine companies exporting fruits, including mangoes, to the mainland.

China, he said, also vowed to support the Philippines in its responsibilities as chair of the Association of Southeast Asian Nations for 2017.

Liu said the talks did not touch on Filipino fishermen’s return to Scarborough Shoal, or Panatag Shoal, which China seized from the Philippines in 2012.

Washington received no request from Manila to alter cooperation–US official