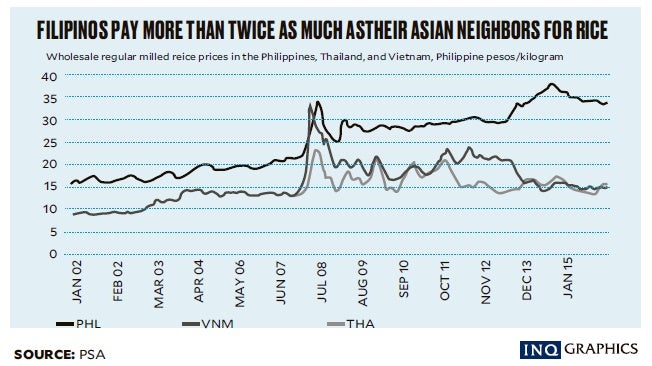 The Food and Agriculture Organization said prices of major food commodities were back on long-term downtrend following price spikes of 2008-2012.

In the meantime, domestic prices of rice in the Philippines remained relatively high compared to prices in neighboring countries as the country moved toward a more open trade regime for the staple grain.

Industry figures show that the cost of producing palay in the Philippines was around P10-P12 per kilo while farmers in Vietnam grow them at P6.50 a kilo and in Thailand and India at about P9 a kilo.

The FAO called for targeted safety nets to encourage small-scale farmers to continue producing while ensuring that food remained affordable to consumers.

“This cut in the flow of cash into rural communities also reduces the incentives for new investments in production, infrastructure and services,” Graziano da Silva said.

He said that globally, food prices were believed to be back to their long-term downward trend in real terms, as supply growth outpaces demand, following a prolonged period of volatility in food markets.

He said the elimination of agricultural export subsidies that affect prices in global markets could be a way to improve trade and help small farmers in developing countries.

In the Agricultural Outlook report issued jointly with the Organization for Economic Co-operation and Development, the FAO noted that mainly because of climate change, it was highly probable that “some abrupt price surges may occur” over the next 10 years.

Read Next
Main stock index falters to 7,600 on regional jitters
EDITORS' PICK
What to expect as Metro Manila starts ‘no vaccination, no ride’ policy on Monday
Metro Manila’s daily COVID-19 growth rate drops to 2% — Octa Research
Over 3 Million worth of prizes to be won at Smart Padala’s SENDali Manalo Promo!
SMDC’s Bloom Residences: A master planned community that cares for your health and wellness
COVID-19 cases in PH pass 3.2 million mark with 37,154 new cases — DOH
Upsilon, Unilever give ‘real talk’ on climate change crisis
MOST READ
IATF protocols now apply to travelers who arrived on or before Jan. 13
‘Not my loss’: Did Kris Aquino just comment on her breakup with Mel Sarmiento?
Thailand records first Omicron death
Tito, Vic and Joey still not quitting, breaking trends as they celebrate 50th year in the biz
Don't miss out on the latest news and information.