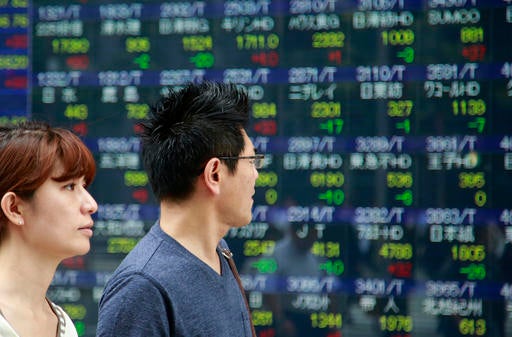 CURRENCY JITTERS: The pound extended losses, falling as much as 0.5 percent to a 31-year low of $1.2760, as investor anxiety intensified over the British government’s plans to leave the European Union. Many global companies are listed on the FTSE index, and their earnings tend to benefit when the pound weakens. The dollar rose to 102.30 yen from 101.78 yen. The euro fell to $1.1175 from $1.1213.

ANALYST’S TAKE: “Solid manufacturing PMIs suggested expansion in September and bolstered the case for the rate hike,” Alex Furber, senior client services executive at CMC Markets in Singapore, said in a daily note referring to the U.S. Purchasing Managers’ Index. “In the short term, this may see the equity market cool somewhat as investors pull out of risk assets as the Fed is seen to be normalizing.”

JAPAN PRICES: Companies cut their outlook for inflation to 0.6 percent over the next year, the fifth reduction in a row, the Bank of Japan’s quarterly Tankan business sentiment survey showed, according to Kyodo News. The result suggests that the central bank might have to roll out more stimuli to achieve its 2 percent inflation goal.

CENTRAL BANKING: Australia’s central bank left its main benchmark rate unchanged at 1.5 percent following a scheduled policy meeting. The decision was the first under new governor Philip Lowe, who cited lower than average global growth as a reason for staying on hold. Investors were also awaiting a rate decision by India’s central bank.

ENERGY: Benchmark U.S. crude oil fell 37 cents to $48.44 per barrel in electronic trading on the New York Mercantile Exchange. The contract closed 57 cents higher at $48.81 a barrel on Monday. Brent crude, the international standard, lost 30 cents at $50.59 a barrel in London. TVJ/rga