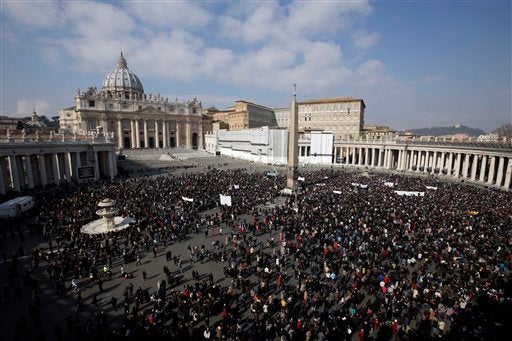 The Vatican, seat of the Catholic Church. AP

PARIS, France — Seven Catholic organizations on four continents announced in a joint communiqué Tuesday their divestment from fossil fuel companies in order to help curb the threat of global warming.

This is the largest number of Catholic institutions to simultaneously pull investments from the oil, gas and coal business, according to the Global Catholic Climate Movement, which coordinated the announcement.

“Climate change is already affecting poor and marginalized communities globally, through drought, rising sea levels, famine and extreme weather,” said Father Peter Bisson, the Provincial of the Jesuits in English Canada, one of the groups.

“We are called to take a stand,” he said in a statement.

Other religious institutions have similarly divested in the last two year, including the Episcopal Church, the United Church of Canada, and the Church of Scotland.

Up to now, however, fewer Catholic organizations have taken such steps.

Global warming is driven mainly by the burning of fossil fuels, which has raised average global surface temperatures by one degree Celsius (1.8 degrees Fahrenheit) over the last century and a half.

The Paris Agreement inked by 195 nations in December, calls for capping warming at “well below” 2 C (3.6 F) over pre-Industrial Revolution levels — a hugely ambitious task, according to scientists.

The actions taken by the seven Catholic groups varied.

Non-profit US healthcare provider SSM Health — with 33,000 employees, including 1,300 doctors — purged coal-related investments from its health invest portfolio, valued at $2.4 billion as of June 30.

“Following the teaching of Pope Francis, and in line with its own mission, FOCSIV had decided to publically announce its fossil fuel divestment,” said the organization’s president Gianfranco Cattai.

The Vatican — with its own bank and massive holding worldwide — has not itself divested.

But in his June 2015 encyclical on climate change, Pope Francis suggested such actions are consistent with responsible stewardship of Nature.

“Boycotting certain products,” he said in the Laudato Si address, can compel businesses “to consider their environmental footprint and their patterns of production.”

Last month, Cardinal Peter Turkson, president of the Pontifical Council for Justice and Peace and a key advisor on the encyclical, made the link explicit.

“The same logic animates the fossil fuel divestment movement,” he said in presenting a message on behalf of the Pope on the World Day of Prayer for the Care of Creation, a pan-Christian event.

The value of the Catholic investment portfolios being scrubbed of oil, gas and coal is no doubt too small to impact share prices.

“We see an enormous value to divestment by faith institutions regardless of their assets,” said Yossi Cadan, a divestment campaigner at climate NGO 350.org.

The other Catholic groups announcing divestment include the diocese of the Holy Spirit of Umuarama in Brazil’s Parana state — the first diocese and the first Latin American entity to dump investments in fossil fuels.

Faith-based groups make up about a quarter of the nearly 600 institutions that have taken steps to divest, according to 350.org, which tracks the divestment movement.

A report last month calculated that fossil fuels from all the active oil, gas and coal fields or mines around the world — if allowed to operate to the end of their projected life times — would punch through the 2 C global warming cap. CBB

Read Next
Russia eyed as new export market
EDITORS' PICK
Marian Rivera partners with JC to boost public health awareness
Ang init! Dagupan sizzles at 52 degrees Celsius
Get a chance to win 5G smartphones with Smart Signature Plans
Esperon: ‘The master red-tagger is no other than Jose Maria Sison’
Tired of your Wi-Fi signal problems at home? Here’s a solution!
Mocking PH protests, China keeps 287 vessels in West Philippine Sea
MOST READ
Sharon Cuneta flies to LA to take some time off: ‘I need to breathe, collect myself’
Mocking PH protests, China keeps 287 vessels in West Philippine Sea
Trillanes to run for president in 2022 elections
Locsin tells Roque: Drop the subject, leave foreign affairs to me
Don't miss out on the latest news and information.