Mining clampdown yet to show impact on nickel prices, output 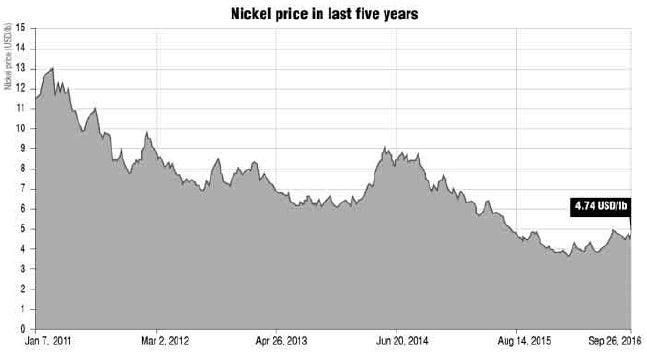 The clampdown on mining firms that allegedly violate laws that protect the environment is expected to have a minimal impact on nickel output this year while publicly listed mining companies that were allowed to continue operations appear to have benefited from the government move.

Global Ferronickel Holdings Inc. (FNI), the country’s second-largest producer of nickel, maintained its forecast reduction in nickel output this year at about 30 percent despite the recommended suspension of 15 more mines.

The Department of Environment and Natural Resources on Tuesday said these mining companies were cited for various violations including siltation of bodies of water, contaminating farmlands and fishponds, and the opposition of local governments and civil society groups to concerned mining projects.

Before the audit was conducted, the DENR had suspended the operations of four nickel mines in Zambales.

Altogether, the nickel mines affected by the audit represent 56 percent of the  domestic output in 2015.

“[But] the effect of the audit on nickel production will be minimal, at least for 2016, since the mining season in the Caraga region runs from April to October and is practically over for this year,” FNI president Dante R. Bravo said in an interview.

“The expected reduction in output this year will still be largely due to miners holding back production amid relatively low prices,” Bravo said, adding that things could worsen next year if the suspension of the mines push through.

Even then, publicly listed mining companies appear to have gained from the audit results, especially those whose operations are not recommended for suspension.

“The mining and oil sub-index (at the Philippine Stock Exchange) went up by as much as about 200 points (on Wednesday trading),” said Astro del Castillo, managing director at fund management firm First Grade Finance.

“Apparently, listed mine operators that passed the audit took the glitter [and] benefited from the rise in global prices,” Del Castillo said.

At the London Metal Exchange, refined nickel fetched a six-week high of $10,755 per ton for cash buyers, the highest since Aug. 10.

At the PSE, mining and oil was the best-performing sub-index on Wednesday with a 2.18-percent gain after falling 2.44 percent on Tuesday when the audit results were announced.

Earlier, Nickel Asia told the PSE that while the DENR recommended the suspension of Hinatuan Mining Corp.’s operations, its three other mines passed the audit.

“I suspect that the results of the audit are not yet fully factored in and it might take some time before foreign investors (show signs of the audit’s) impact,” Lacson said.

“Or, with the uncertainty of the audit results no longer there, mining stocks are now free to go up,” he added. “At the end of the day, even if we say that nickel mines suffered from the audit, those that are still in operation might benefit from the supply situation.”

Read Next
Office market seen to sustain growth
EDITORS' PICK
Ahead of ONE: Full Blast II, Mongkolpetch warns Elias Mahmoudi: ‘Watch out for my fists’
Alex Eala wins Grand Slam on Independence Day: ‘I hope I made my contribution to the country’
Robredo urges supporters: Don’t think we’re the only ones who are good
PH logs 7,302 new COVID-19 cases — DOH
Kai Sotto continues to inspire Filipinos by sharing his passions and stories with Smart Prepaid
Taguig exceeds daily COVID-19 vaccination target of 6,800 individuals for 3 days
MOST READ
China cautions G7: ‘small’ groups don’t rule the world
PH to have cloudy, rainy Monday — Pagasa
Leni vs. Sara
Rare earth metals at the heart of China’s rivalry with US, Europe
Don't miss out on the latest news and information.