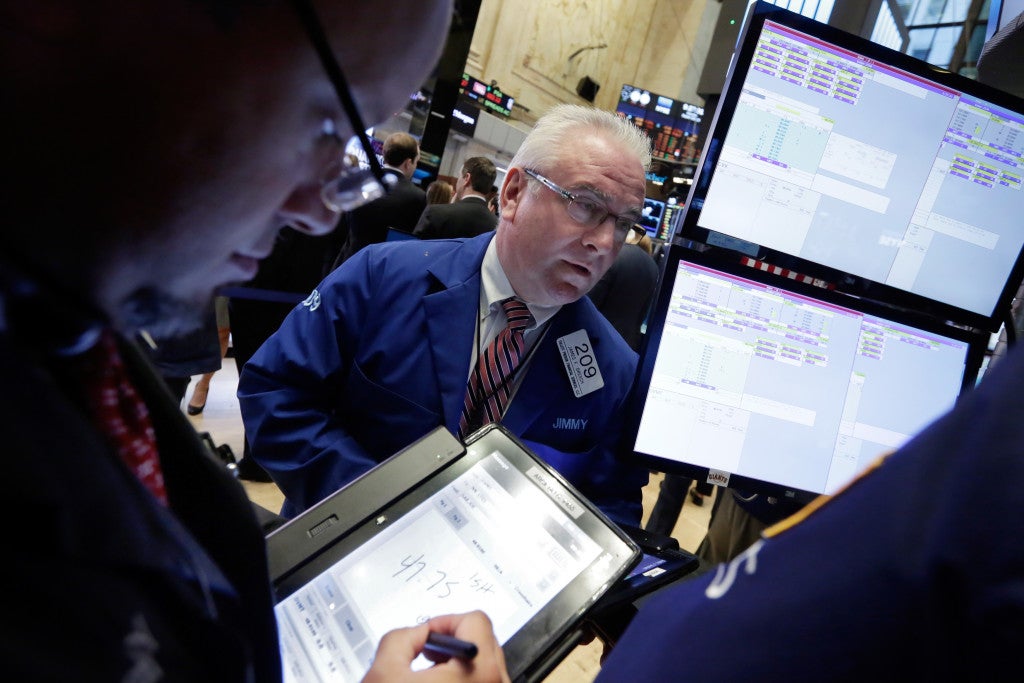 In this Sept. 26 photo, trader James Dresch (center) works on the floor of the New York Stock Exchange. AP

SEOUL, South Korea—Asian stock markets were lower on Friday as investor sentiment was dented by overnight losses on Wall Street and renewed worries about the health of Deutsche Bank.

BANK WOES: US authorities are seeking $14 billion from Deutsche Bank to settle legal claims over its sales of mortgage securities in 2007 and 2008, which helped kick off a global financial crisis. The bank said it had struck a deal to sell a subsidiary and stressed that it was not seeking government help but investors are worried what will happen to Germany’s biggest lender and to the broader financial system if Deutsche Bank runs low on capital. Analysts said the troubles at Deutsche Bank are raising scrutiny over other banks in Europe, which are also in talks regarding mortgage settlement with the US authorities.

CHINA OUTPUT: The Caixin monthly purchasing managers’ index, which is closely watched for insights into China’s economy, ticked up to 50.1 for September from the previous month’s 50.0 reading. The tiny expansion in activity and gains in overall new orders for the third straight month offered a glimmer of hope for the world’s second-largest economy that has been grappling with a prolonged slowdown. But the private survey result was not strong enough to relieve investors outside China.

OIL: Benchmark US crude lost 54 cents to $47.29 per barrel in New York. The contract gained 78 cents, or 1.7 percent, to close at $47.83 a barrel on Thursday. Oil prices surged earlier this week after the nations of OPEC, which collectively produce more than third of the world’s oil, agreed to a small cut in production in a surprise decision Brent crude, the international benchmark, fell 67 cents to $49.14 a barrel in London.