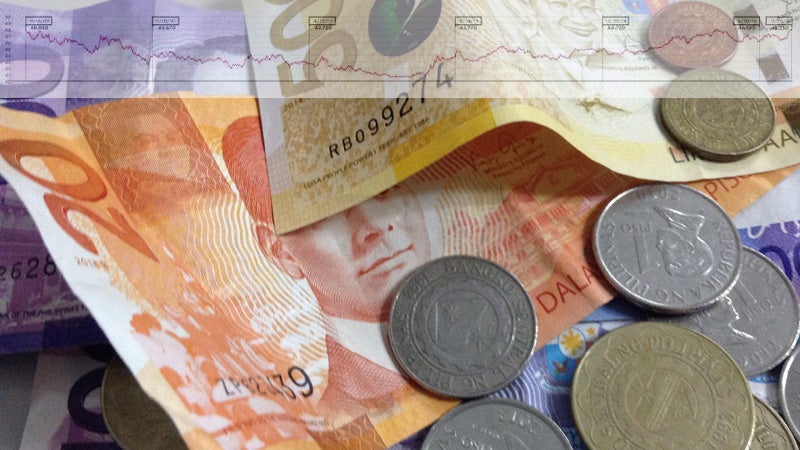 INVESTOR concerns on the Duterte administration’s war on drugs coupled with external developments causing uncertainty globally pulled the peso to a seven-year low on Monday.

At the Philippine Dealing System, the domestic currency reached an intraday low of 48.26 after opening at 48.07, weaker than Friday’s close of 47.99.

“The peso movement reflected the continuing uncertainty about the US Fed’s next policy action, just like other regional currencies,” Governor Amando M. Tetangco Jr. of the Bangko Sentral ng Pilipinas (BSP) said in a text message to reporters.

The US Federal Reserve kept policy rate steady during its meeting last week, such that markets are betting it could eventually push through with a rate hike in December, soon after the presidential election in November.

Some analysts have turned critical over how Mr. Duterte has been waging a war on drugs, alongside some of his foreign policy pronouncements.

Global debt watcher S&P Global Ratings last week said Mr. Duterte’s law and order thrust “could undermine respect for the rule of law and human rights, through the direct challenges it presents to the legitimacy of the judiciary, media and other democratic institutions.”

S&P had taken note of numerous instances of extrajudicial killings under Duterte.

“When combined with the President’s policy pronouncements elsewhere on foreign policy and national security, we believe that the stability and predictability of policymaking has diminished somewhat,” said the ratings agency.

While most Asian markets have not been spared from market reversals resulting from earlier US Fed jitters, Philippine markets—including bonds, stocks and currency—have underperformed regional peers, said Bank of the Philippine Islands economist Emilio Neri Jr.

“Most of the investors who have raised their concerns with us find the uncertainty about Philippine foreign policy and diplomacy to be most unsettling,” Neri said.

Even so, Finance Secretary Carlos G. Dominguez III told reporters that the peso was not the lone loser among currencies globally.

“You know that when Yellen says we might raise the rate, that will affect us,” he said, referring to US Federal Reserve Chair Janet Yellen.

“It’s not only our situation,” Dominguez pointed out.

External factors, including economic developments in China, the European Union and Japan, as well as expectations of a lower current account surplus are exacerbating the peso’s weakness, Cuyegkeng said.

“Some analysts think the current account would post a deficit this year or in the coming years—if this materializes, then we would be back to a twin deficit environment that plagued the economy early last decade,” he noted.

But Cuyegkeng said other domestic factors weakening the peso “have to do with market perception about Philippine valuations (and its outlook relative to other Asian markets) and other concerns, including noneconomic concerns.”

“In sum, economic fundamentals remain favorable but there are emerging stresses on the economy and could be exacerbated by noneconomic factors. Investors have priced in a lot of positives about the economy and are now on the lookout for risks that could disappoint expectations,” he said.

In a research note, Papa Securities said that foreign funds may be almost done selling.

“The pace of the net outflows in the past two months has been faster than other periods historically, averaging above a billion pesos a day. There is still some debate if the cause of which is profit-taking, uncertainty over the Fed hike, or concerns on domestic stability. It’s likely an unknowable mix of all three—though one thing is for certain, this sell-off is certainly not regional,” the local stock brokerage said.

The brokerage said it suspected that Mr. Duterte’s often-quoted statements were merely aggravating foreign selling in a relatively “fragile” market.

Since peaking in August, investors have been net sellers to the tune of around 0.75 percent of the total market cap of the PSEi, according to Papa Securities.

“The only other country to experience anywhere near this level of outflows is Vietnam, and theirs is only at -0.35 percent of their peak at the start of the year,” the local stock brokerage said.

Papa Securities said it remained bullish for 2017, sharing the BSP’s assessment that the country’s economic fundamentals were solid and the list of catalysts expected to emerge starting in the fourth quarter were numerous.

Peso forecast to weaken to 48 to $1 this year