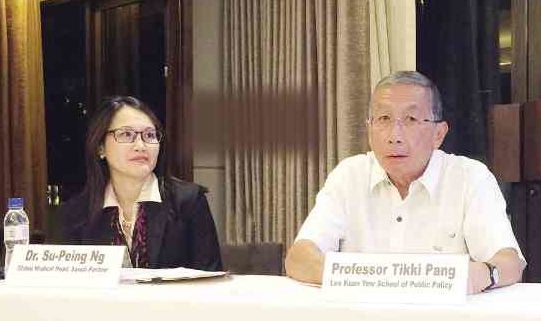 NG and Pang: Vaccination can help the public health community in dengue-endemic nations tip the balance in favor of dengue control. Photo by Charles E. Buban

It seems the Philippines and the fight against dengue fever are inextricably intertwined. It was here, in 1954, where the first epidemic of severe dengue was reported and laboratory-confirmed. More than half a century later, in April this year, it was the Philippines that initiated the world’s first public dengue immunization drive, sending a strong message that this element is a critical addition to integrated disease prevention efforts needed to more effectively manage dengue burden.

“The Philippines is somehow taking ownership of the disease. After all, dengue fever was initially known as Philippine hemorrhagic fever,” said Prof. Tikki Pang of the National University of Singapore’s Lee Kuan Yew School of Public Policy.

He related that the Philippines also played a significant role in the development of Dengvaxia, the first-ever vaccine for dengue fever that is now being incorporated into a country’s multipronged attack on the disease to ward off its outbreak.

He said: “The Philippines participated in all three phases of the vaccine’s clinical development and of the 40,000 volunteers from around the world, 3,500 children were from the Philippines, setting up clinical trial sites in Alabang, Muntinlupa City (Phase 1); Barangay Del Remedios in San Pablo City (Phase 2); and Barangay Guadalupe in Cebu City along with Barangay Del Remedios (Phase 3). So researchers and volunteers here already knew its safety profile and effectiveness even before it was cleared for worldwide release.”

According to Dr. Su-Peing Ng, global medical head of Sanofi Pasteur, the vaccine has been shown to reduce the occurrence of symptomatic dengue by 65.6 percent; prevent severe dengue cases by 93.2 percent; and prevent hospitalization by 80.8 percent.

Ng said: “Dengue represents significant burden in endemic countries like the Philippines. The Philippines spends P16.7 billion a year dealing with this disease. For one hospitalized patient that would be about P27,000 worth of bills not including the lost days in school or work.”

She said vaccination can help the public health community in dengue-endemic nations tip the balance in favor of dengue control, adding that vaccination adds a critical line of defense to comprehensive dengue prevention efforts.

While the newly licensed vaccine against the dengue virus may not be a silver bullet for dengue and it’s effectiveness depends on the local epidemiology of dengue as well as how intense the transmission is, Dengvaxia could still lead to a decrease in the number of cases of the disease if implemented correctly.

“This is why the World Health Organization’s position for the use of Dengvaxia, is for countries to consider introduction of the vaccine only in communities that have the highest transmission rates and focusing on them,” said Pang.

He added that based on the same WHO position, dengue vaccination should be a part of a comprehensive dengue control strategy, which includes well-executed and sustained vector control, evidence-based best practices for clinical care and strong dengue surveillance.