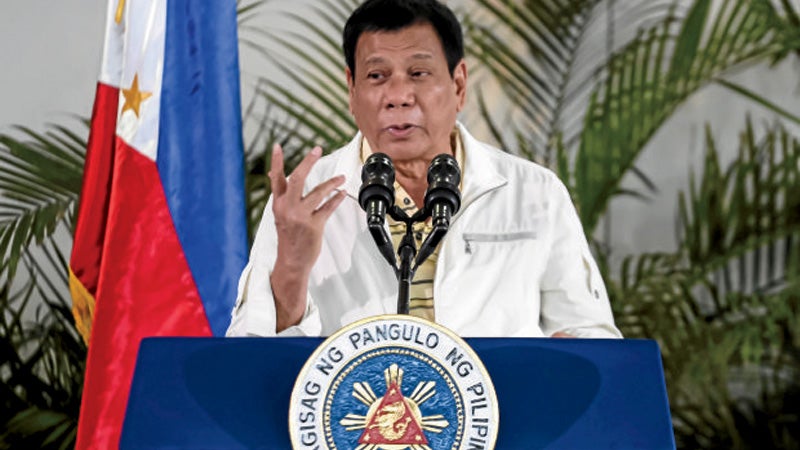 President Rodrigo R. Duterte has approved the rollout of nine infrastructure projects worth over P171 billion barely 100 days since he assumed office as the administration wants to impress foreign investors whose interest may waver amid international bad press that the President has been getting, the country’s chief economist said Thursday.

At the general membership meeting of the Chamber of Thrift Banks, Socioeconomic Planning Secretary Ernesto M. Pernia also announced that the National Economic and Development Authority (Neda) Board chaired by the President has come up with policy changes that will fast-track the implementation of vital projects aimed at filling the country’s infrastructure gap.

The nine projects approved by the Neda Board last Wednesday are as follows:

The biggest project to be undertaken via the PPP route was “the Department of Transportation’s (DOTr) medium-term solution (doable within three years) to improve safety and security, maximize capacity through ‘refreshed’ infrastructure (airside requirements such as air traffic management), and improve passenger service standards in the existing Naia,” Neda said in a statement.

For the Naia development PPP, “the implementation is through a concession to the private sector for the refurbishing or adding assets for air traffic and land side management, and for passenger services,” while the private sector partner “will also operate and maintain the airport (both airside and landside) according to international standards (International Civil Aviation Organization, Federal Aviation Administration, etc.),” Neda added.

“The concession period is for 15-20 years, including the design/construction period. The DOTr expects to begin PPP procurement upon Neda Board approval, and award and sign a concession agreement by September 2017,” according to Neda.

As for the Metro Manila BRT, Neda said that the DOTr-led project “aims to provide alternative mass transit in Metro Manila by establishing a BRT system within an EDSA route of 48.6 kilometers covering Monumento up to Diosdado Macapagal Avenue/Roxas Boulevard, with integrated routes between the Ortigas Business District, Bonifacio Global City, and the Makati Business District.”

“The BRT is also planned to link with the Naia terminals and include off-corridors to the target Integrated Transport System terminals in the north, south and southwest of Metro Manila, and in the vicinity of SM Fairview,” Neda said.

According to Neda, the BRT project will involve “the construction of dedicated lanes with busways, depots, and as much as 63 stations/terminals” within three years starting 2017 until 2019.

“These lanes include one lane per direction between stations, and two lanes per direction at stations. The project will also procure high-quality and high-capacity buses, install smart signaling system at intersections and central control system, and provide contactless automatic fare collection system,” Neda further said of the Metro Manila BRT project, which is expected to be operational in 2020.

Pernia, who is also the Director-General of Neda, said that the Neda Board approvals at last Wednesday’s Cabinet meeting was the fastest, as it only took about 42 days following Neda Investment Coordination Committee (Neda-ICC) approval of projects that the Board consequently acted on them.

“It was a record time frame. It used to take months for projects to pass through ICC,” the Neda chief noted.

Pernia later told reporters that the faster approval of projects was one way that the Duterte administration was “showing results” in terms of rolling out infrastructure.

The Neda chief told the forum that to catch up with the Philippines’ richer Asean neighbors, economic growth should be sustained, ideally at double-digits, coupled with the “success of President Duterte’s peace and order campaign.”

Pernia admitted that “we need to counter adverse international press that will dampen the appetite of foreign direct investors.”

Extra-judicial killings as well as the President’s controversial remarks against US President Barack Obama and the United Nations, among others, have landed not only in local but also international media outlets’ headlines.

Also, Pernia said tweaks in policies given a go-ahead by the Neda Board will allow the government to implement infrastructure projects faster.

According to the Neda, among the new policies include “the updating of the economic hurdle rate from 15 percent to 10 percent, due to improved Philippine economic conditions, which have lowered the cost of domestic and foreign capital.”

“This will facilitate the economic justification for more projects (and therefore approval by government) that will help in spreading more public services to far-flung areas of the country, in support of reducing poverty everywhere, as committed by the President,” Neda explained.

Also, the Neda-ICC’s project cost floor was raised to P5 billion from P1 billion previously “to declog the pipeline of projects for ICC approval and to promote greater decision flexibility and accountability of line departments in implementing their priority projects.”

“Approval of projects worth less than P5 billion will be delegated to heads of agencies, but will be reported by these agencies to the ICC prior to implementation. The Neda Secretariat will provide assistance to agencies to facilitate effective and accountable exercise of such delegation of approvals to implementing agencies,” Neda said.

Further, the Neda Board “approved the streamlining of ICC review procedures for minor changes in scope, design, cost, and extension of implementation or loan/grant validity of projects,” such that “approvals of these projects will be delegated to the level of the ICC, the Department of Finance (DOF), and the Neda Secretariat, as applicable, based on existing laws, rules and regulations.”

The Neda Board likewise approved to streamline its membership to 11, which include the President, as well as the secretaries of Neda, DOF, Department of Trade and Industry, Department of Public Works and Highways, Department of Budget and Management, DOTr, Department of Energy, the Executive Secretary the Mindanao Development Authority chairperson, and the deputy governor of the Bangko Sentral ng Pilipinas.