How companies are cashing in on Pokemon Go | Inquirer Business

How companies are cashing in on Pokemon Go 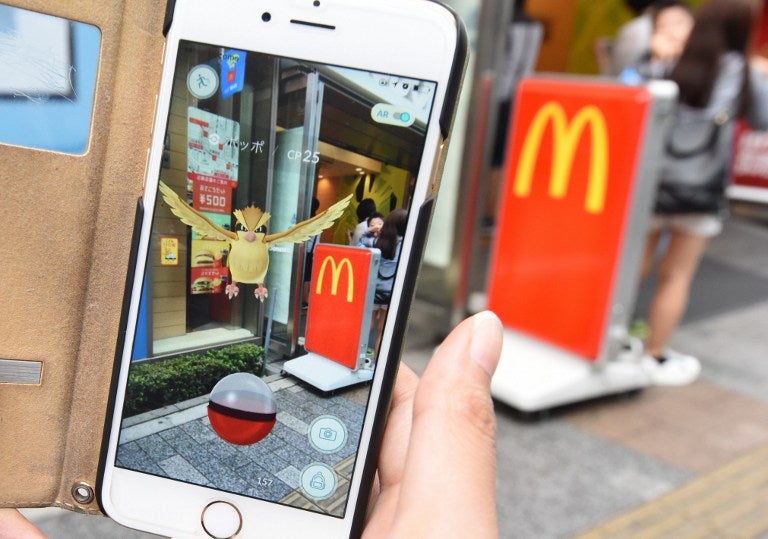 This file photo taken on July 22, 2016 shows a woman playing Nintendo’s Pokemon Go game on her mobile phone in front of a McDonald’s restaurant at Akihabara shopping district in Tokyo. Pokemon Go has sent millions of people onto the streets in a worldwide hunt for virtual monsters — and from neighbourhood restaurants to multi-national corporations, businesses smell a profit. AFP

Pokemon Go has sent millions of people onto the streets in a worldwide hunt for virtual monsters — and from neighborhood restaurants to multi-national corporations, businesses smell a profit.

“It’s going really well — this is the fourth time we’ve had to restock our Pokemon cuddly toys in two weeks,” said salesman Corentin Flamand, surveying a row of mini Pikachus at the Micromania store in Paris’ bustling Bastille area.

The chain has brought in mugs, baseball caps and a slew of other products to mark this year’s 20th anniversary of the cult Japanese franchise, and is now hoping to profit from the surge of new fans created by the smartphone game.

Beyond products, companies see huge potential in the app’s ability to attract crowds to places in a way that typical advertising does not, by tempting them with the prospect of adding new Pokemon to their collections.

Bars and restaurants from New York to Sydney are reportedly paying for “lures”, a feature of the game which draws Pokemon to a location, hoping this will draw in customers to linger and spend money.

“If you run a bar/restaurant and aren’t spending $10/day on lures and advertising the fact, what are you even thinking?” Eric Neustadter, former head of Microsoft’s Xbox Live gaming service, wrote in a widely-shared tweet.

Philippe Bonnasse, a retail expert at French consultancy CA Com, said companies could profit from showing “that their brand is in sync with the times — that they’re ‘Pokemon Go compatible’.”

Some firms are offering Pokecoins — the game’s currency, which players can spend on accessories to help them hunt — as prizes for competitions.

And then there are the many businesses putting a Pokemon twist on their products.

Maxwell’s, a restaurant in London’s Covent Garden, says it has seen a 400 percent jump in sales of its elaborate “freakshake” milkshake since it started offering a new version inspired by the beloved turtle-shaped Pokemon, Squirtle.

Topped with a donut in the shape of one of the “Pokeballs” that hunters use to catch the critters, manager Lloyd Vaughey says the restaurant is shifting 200 of the violently coloured drinks a day.

In Edinburgh, a taxi firm is offering flat-price journeys that take punters past at least 50 “Pokestops” to load up on Pokeballs, while specialised hunting tours have sprung up everywhere from Barcelona to Mexico City.

At the extreme end of the industry, San Francisco start-up PokeWalk is even charging busy players to have their phones walked for them by full-time professionals.

Industry tracker Sensor Tower estimates that the game has already generated more than $200 million since its release in early July. Pokemon Go is free to download, but players can pay for extra add-ons that make them better hunters.

Commercial partnerships with other brands could offer another hugely lucrative source of income for its owners — but the Pokemon Company, which licenses the franchise, is currently concentrating on the game’s rollout.

McDonald’s is so far the only brand with a sponsorship deal, in Japan — hoping that having its restaurants designated as “PokeStops” and “Gyms”, where players can fight and pick up virtual supplies, will bring in customers in a country where it is badly struggling.

But the game’s developer Niantic has invited companies to express an interest in tie-ups on its website, signalling that similar deals could follow.

“The partnerships will be agreed in a second phase, but it will be selective,” a Pokemon Company representative told AFP.

In Japan, the game is seen as a potential boost for tourism — especially in the northeast, desperate for visitors after the massive 2011 earthquake, and in Kumamoto in the south, also hit by a series of deadly quakes in April.

Japanese authorities have signed a deal with Niantic to place Pokestops and Gyms in a way that guides tourists to neglected sites — steering clear of the exclusion zone around the devastated Fukushima nuclear plant.

In Japan and beyond, cafes may well profit from players looking for somewhere to hang out and hunt — but retailers may find that footfall from customers glued to their phones has limited benefits, say analysts.

There is also the burning question of whether Pokemon Go is here to stay — or whether it’s a fad we will soon forget about.

“Betting on a duration of three to six months, until Christmas, could allow companies to organise themed operations around the game,” said Yves Marin of the Wavestone consultancy — hopefully winning new customers whose loyalty could outlast the craze./rga