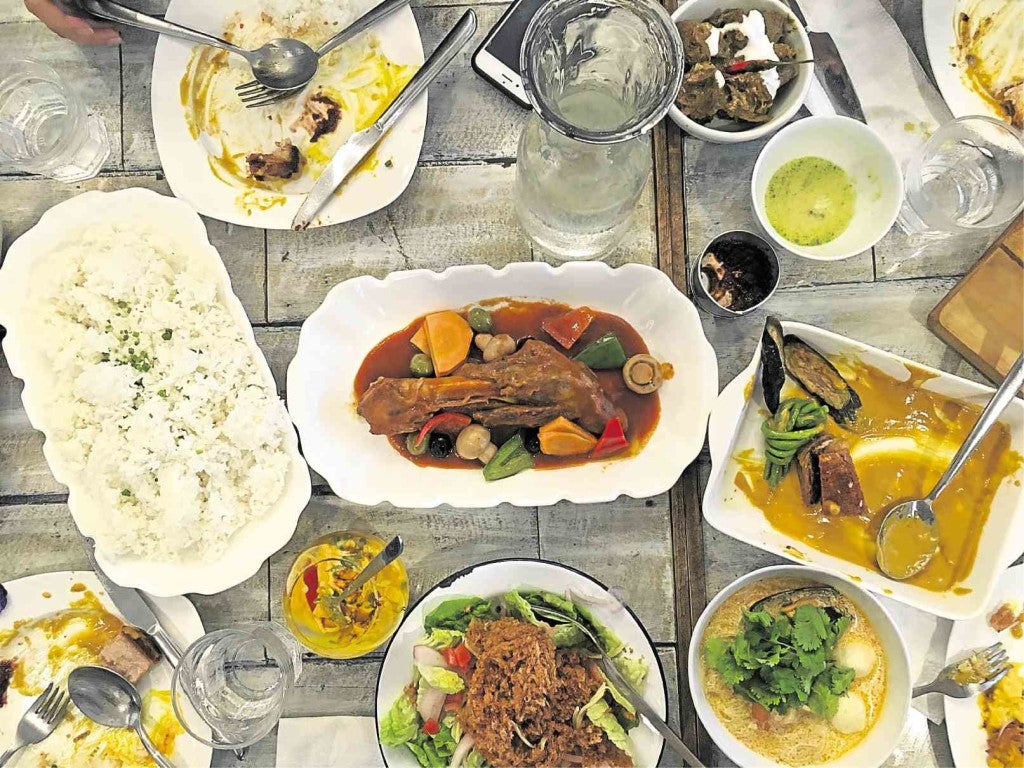 Angeles has changed since the last time I visited.

Pampanga has always been a thriving food hub but next generation Capampangan celebrity chefs have given the Angeles food scene extra flair.

Case in point: Cafe Fleur by Chef Sau del Rosario, a restaurant that is both a tribute to Chef Sau’s Pampango roots while showcasing his growth as a French-trained chef.

The venue is a heritage home and one can easily envision a family from yesteryears making memories in this space.

Here the celebrity chef presents his interpretation of traditional recipes.

Tamales, which is usually served wrapped in banana leaves, is here served deconstructed in a shapely glass.

The well-known Capampangan delicacy (also called Boboto) made with very finely ground rice, coconut milk and various savory toppings like chicken and ham, is presented in a manner befitting a fine dining setting.

Purists are bound to raise an eyebrow but it’s a lovely modern-day expression of a classic comfort dish. (The bread that comes with it is tasty, too, encouraging the diner to treat the tamales like a pate and spread it on the bread.)

Kare-kare, a quintessential Filipino comfort food, is likewise deconstructed and twisted. Kare-kare usually uses oxtail; here Chef Sau uses crispy pork belly and other ingredients that are neatly tucked in a corner of the serving plate.

The rest of the plate is a bed of peanut sauce mixed with macadamia and the irresistible flavor of truffles.

Other items are more straightforward, such as the lamb kaldereta, okoy and the chicken galantina.

What’s great about the menu, though, is that it shows that through the years, Chef Sau has developed not only recipes but also friendships.

The best item on the menu, for me, is Chef See’s laksa.

Chef See Cheong Yan is the Culinary Head of Enderun Colleges. He is Malaysian and IMHO makes the best laksa in the Philippines. The problem is that his laksa is only available during rare events. It’s great to see that Chef See has allowed Chef Sau to use his recipe.

Now, if you ever need a laksa fix, as I often do, it’s just a couple of hours away.

While it will be difficult to resist trying everything on the menu, do leave room for dessert because the desserts here are yummy. Have the pandan sans rival or the jackfruit sans rival and allow yourself to go home stuffed silly. 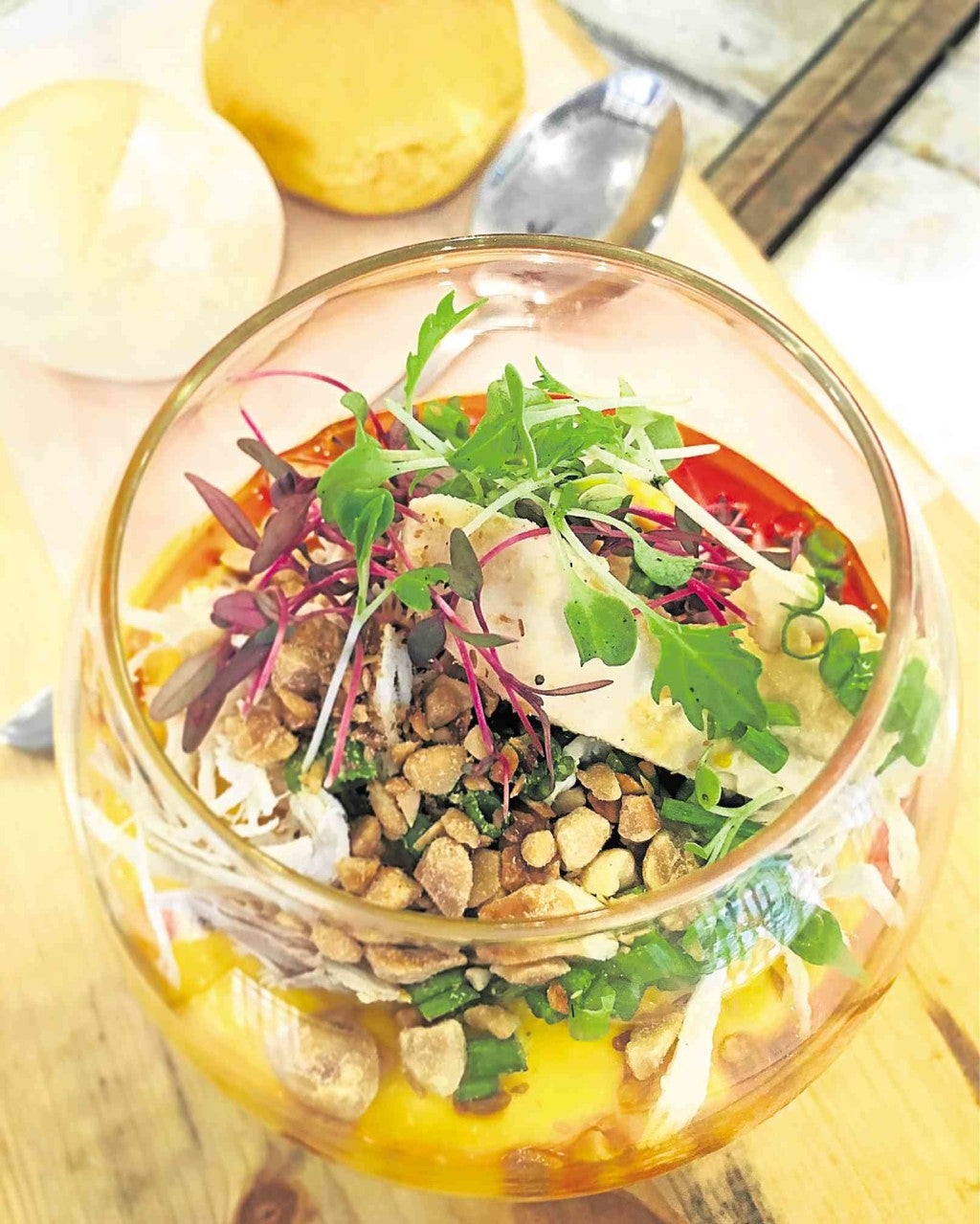 Claude Tayag is another famous Capampangan celebrity chef, or as he was called at the Mission Manila dinner during Madrid Fusion, El Kusinero.

He is better known for Bale Dutung, his home, showroom and private dining space with his lovely Capampangan wife Mary Ann Quioc. This is the place No Reservations host Anthony Bourdain visited and loved—a place that is ironically by reservation only and for a minimum guest list of around 12.

Thankfully, the Tayags have opened Downtown Cafe. While it is by no means Bale Dutung, which is an incomparable experience, Downtown has a charm of its own, with its diner vibe complete with jukebox and a Coke ad with the stunning Gloria Romero. The big bonus, of course, is that we can now get a taste of Claude Tayag’s cooking every day.

Best on the menu is the duck. In classic Claude Tayag humor, the menu reads “What’s Up, Duck?” The duck leg confit is salted and slow-cooked for two hours; you eat it Peking Duck-style, with wrappers.

The star of the menu of late, though, is the bringhe, which won the the People’s Choice Award at the 8th Annual Embassy Chef Challenge in Washington D.C. last May.

The waiters call it bringhe pizza; it felt like a morphing of bibingka galapong and paella. It’s a fun, unique snack.

On a rainy day, have a cup of their barako. Really Filipino and really good coffee. I bet coffee guru Chit Juan would approve.

Food is served cafeteria or “turo-turo” (turo means ‘point’) style but the menu is exactly what would likely be served in a true Capampangan home.

Be brave and try the Betute—stuffed frogs legs. So beautifully savory you will forget you are eating frog. The morcon is another must-try, another fine example of how Capampangans are masters in the umami of the ulam.

Before heading home, make a pit stop at Susie’s. This is another cafeteria-like place perfect for merienda. If you have time, sit down and have the pancit. Otherwise, take home a bottle of Susie’s Taba ng Talangka (ask for the female crab fat) but make sure to eat in moderation.

In between restaurants, say a quick prayer at the Holy Rosary Parish Church. Thank the Lord for the blessings of such delicious food just 2½ hours away from Manila and pray that you don’t gain too much weight after all that bingeing!

Everybody’s Cafe. Nepo Mart, Angeles City. Everybody’s has a stall at the Salcedo Market in Salcedo Village every Saturday from 7 a.m. to 2 p.m.