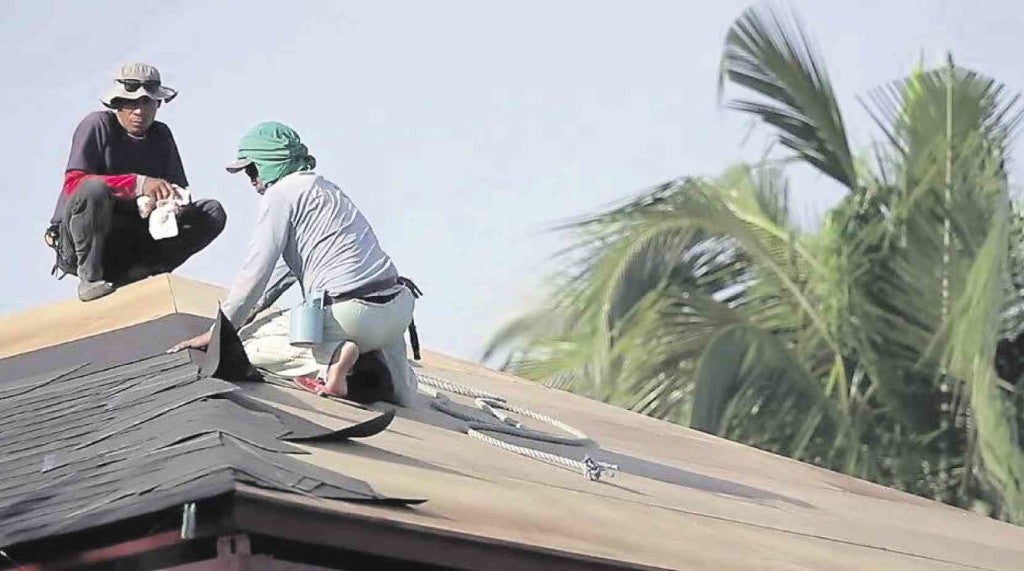 HOME BUILDERS soon realized that they could utilize Santa Clara marine plywood in roof construction as well as in walls and ceilings because of its resistance to moisture.

A once-unassuming material is steadily becoming a favorite among home builders and interior designers. That humble stuff is marine plywood, a sheet manufactured from layers of water-resistant wood, glued together.

Durable and often less expensive than its solid wood counterparts, marine plywood was the secret of several houses and home furniture that amazingly survived unscathed after Tropical Storm “Ondoy” in 2009 submerged several areas of Luzon, including Metro Manila, in floods at record-breaking levels.

“Most of these houses and pieces of furniture, we later found out, were constructed out of marine plywood that came from us,” said Randy Ng, assistant to the president of San Manuel Wood Products Inc. (SMWPI) maker of Santa Clara brand of marine plywood.

Ng related that marine plywood has been his company’s bread and butter product since 1923 (the brand was named after Santa Clara of Assisi, the one Filipinos pray to for good weather on their wedding day as well as other special occasions. These prayers usually come with an offering of eggs).

“Our manufacturing plant in Toril, Davao City and in Esperanza, Agusan del Sur has been manufacturing quality marine plywood sheets through the traditional method. But while this process is labor-intensive—for example, logs are scrutinized for its density as well as species, then each sheet is still manually inspected, and finally samples of each batch are boiled in water for 72 hours to see if the bonded layers hold tight—we believe the quality of our products has endeared us more to our customers who require reliable, durable and longer-lasting building material,” said Ng.

Interestingly, Santa Clara brand of marine plywood became well-known not only in home construction but in boat building industry as well.

Ng related: “In Mindanao, where our products were first distributed, boat makers, for decades, rely on our plywood because they found out ours resist warping, rotting, seawater and moisture penetration. As a result, our brand of marine plywood lasts much longer than other brands they tried. This reputation soon reached other fishing communities so that even those coastal towns in northern Luzon also look for our brand. We may have a higher than average price tag but our buyers would rather have our marine plywood than gamble on the solidity of their boats.”

Because of this resistance to moisture, home builders later realized that they could also utilize SMWPI’s marine plywood in roof construction, particularly in shingle, a type of roof covering consisting of individual overlapping materials.

“For decades, cabinet makers also use our marine plywood because they not only resist moisture but also are able to carry load and not deform or warp,” said Ng.

But because of this reputation, one of the major challenges SMWPI faced in recent years was the proliferation of fake counterparts.

“To beat this, we have control stickers with bar code as well as color codes that enable us to check the authenticity of our products. Just to be sure we advise our buyers to get them in reputable lubber or hardware stores as well as in more popular do-it-yourself (DIY) hardware stores,” said Ng who added that Santa Clara marine plywood is also exported to countries like Indonesia and Palau (island nation in Western Pacific Ocean).

In recent years, Ng related that even interior designers are asking for their marine plywood not just as accents but for use in entire walls and cabinets.

“This same material once relegated to workshop shelving in many people’s minds is now the stuff of dream homes. Interior designers find that our marine plywood lends a light and fresh-faced feel. Indeed, this is a design solution that’s relatively inexpensive but way much better than particle board or medium density fiberboard or MDF,” said Ng.

He added that at the end of the day, home builders just want to be confident in the product that they choose. “Santa Clara marine plywood gives you that confidence and reassurance, from its sturdy construction, down to its feel that other products lack—the feeling of solid wood.”