US stocks rise to record highs after strong jobs report 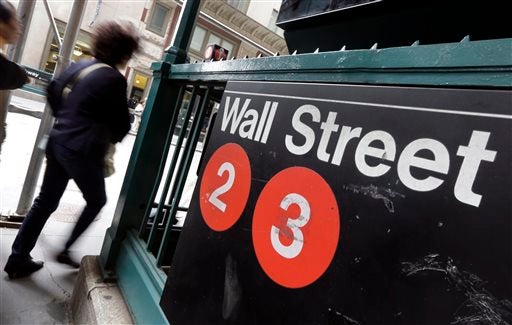 In this Oct. 2, 2014 file photo, people pass a Wall Street subway stop, in New York’s Financial District. Stock markets were modestly higher Friday, Aug. 5, 2016 in the run-up to monthly U.S. jobs data that could go a long way to determining whether the Federal Reserve will raise interest rates later this year. AP

NEW YORK — U.S. stocks jumped to record highs Friday after a strong jobs report for the month of July gave investors more confidence that the economy is still growing. Financial and technology stocks soared and investors sold the safe assets they have favored for most of this year.

The Labor Department said U.S. employers added 255,000 jobs in July, far more than investors expected and the second straight month of strong gains after shaky reports this spring. Stocks made their biggest gain in almost a month. Banks traded higher as investors anticipated higher interest rates and bigger profits on mortgages and other loans. The Nasdaq composite closed at a record high as tech stocks continued to climb. Consumer companies also made big gains. Investors sold bonds, precious metals, and phone and utility companies, safe investments that soared earlier this year as investors worried about the health of the economy.

“It looks like the economy is improving, it looks like corporate earnings are on the upswing,” said Sam Stovall, U.S. equity strategist for S&P Capital IQ. That marks a change from earlier this year, he said, when investors worried the U.S. would fall into a recession and tech companies would suffer as businesses cut spending. But tech stocks have come back to lead the market higher over the last few months.

The strong jobs report suggests that Britain’s vote to leave the European Union in late June didn’t have much effect on hiring plans for U.S. companies. The unemployment rate remained at 4.9 percent and hourly pay continued to rise. The hiring spree follows an even larger surge in June and represents a turnaround from weak job growth in the first half of this year, including disappointing job gains in April and May.

“With an election where both candidates are likely to talk about how badly the economy is doing and how disappointing growth has been, investors as a whole are more anxious than the job picture would suggest,” she said.

The Federal Reserve has been saying for months that it intends to raise interest rates if the economy’s strength warrants it. July’s report provides more evidence the economy is doing well, boosting the chances that interest rates will go up. But Warne said investor views on the economy and the Fed will keep fluctuating.

Kraft Heinz, the company behind Oscar Mayer bologna, Jell-O pudding and Velveeta cheese, also traded higher after it reported a larger profit than analysts expected. Its stock picked up $3.25, or 3.8 percent, to $88.79.

After Bristol-Myers Squibb said one of its cancer drugs failed in a clinical trial, its stock suffered its biggest slump since 2000. Meanwhile rival drugmaker Merck soared by the most in seven years. Bristol-Myers sank $12.04, or 16 percent, to $63.28 after saying its drug Opdivo did not halt progression of non-small cell lung cancer in the study.

Merck makes a drug called Keytruda that also stimulates patients’ immune systems to fight lung cancer. The company, which took in $533 million from Keytruda this year, rose $6.02, or 10.4 percent, to $63.86. Merck was the largest gainer among S&P 500 stocks, and Bristol-Myers Squibb took the largest loss.

Security software maker FireEye tumbled after it reported weak sales, cut its forecasts and announced job cuts. Its stock plunged $2.02, or 12.1 percent, to $14.73. Rival software firm Symantec disclosed a larger profit and better sales than expected in its fiscal first quarter, and its full-year profit forecast was stronger than expected. Its stock climbed 86 cents, or 4.1 percent, to $21.89.

Benchmark U.S. crude slid 13 cents to $41.80 per barrel in New York while Brent crude, used to price international oils, dipped 2 cents to $44.27 a barrel in London.