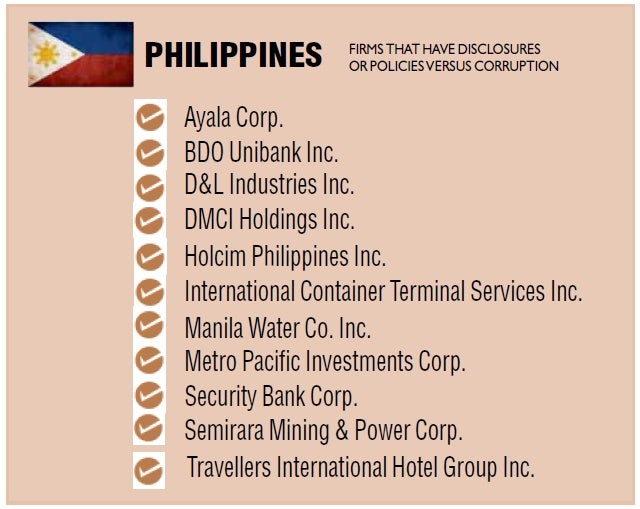 SINGAPORE—Publicly listed corporations in Southeast Asia are not yet doing enough to fight corruption.

This is according to a joint research by the Asean CSR Network and the National University of Singapore (NUS) Business School’s Center for Governance, Institutions and Organizations. The findings were released yesterday during a conference on “Corporate Governance and Responsibility: Theory Meets Practice.”

According to the “Corporate Disclosure on Business Integrity in Asean” study that looked at the top 50 listed companies in Indonesia, Malaysia, Philippines, Singapore and Thailand, just a little over half or 54 percent have a publicly disclosed commitment to fight corruption.

The study also revealed that across the region, there is very low company leadership support for anticorruption programs—at just 18 percent.

Thailand led the way again at 47 percent while the Philippines was the cellar dweller with just 7 percent of the companies indicating their company leadership demonstrates support for anticorruption efforts.

On the question of whether there was a policy that explicitly prohibited facilitation payments, only one of five companies answered in the affirmative. Singapore topped the list at 39 percent of companies disclosing a policy versus facilitation payments, followed by Thailand at 27 percent, Malaysia at 21 percent, Philippines at 14 percent and Indonesia at just 3 percent.

Asean CSR Network Program director Jerry Bernas said in his presentation here that facilitation was defined in the region as payments to public officials to speed up processing of papers and transactions but not to bend the law or break the rules. He noted, however, a “clear trend” against the practice.

The average of 31 percent in the region was pulled up, however, by Thailand at 67 percent and Indonesia at 42 percent. In the Philippines, only about 1 in 10, or 12 percent, of leading companies have a policy on political contributions.

The study also revealed about three of five of the top publicly listed companies in the five countries had a policy covering gifts, hospitality and expenses. Thailand was again the leader at 84 percent, followed by Indonesia at 63 percent and the Philippines at 61 percent. Malaysia brought up the rear at 39 percent.

Bernas said the act of receiving and giving gifts had always been cited as part of Asian business culture, thus “represents a big grey area” due to questions on when does a gift stop being a gift and starts becoming a bribe.

The Asean CSR Network said these findings revealed that “much work needs to be done on various fronts to boost corporate commitment and action against corruption within the Association of Southeast Asian Nations.”

“The findings are a good start for Asean companies to compare their level of disclosure in anti-corruption policies and accompanying actions and enable them to do the necessary actions to rectify any shortcomings. It will be a work in progress but companies need to start somewhere,” said Asean CSR Network chair Yanti Triwadiantini.

“Progress made to tackle corruption in Southeast Asia will go a long way in building a more cohesive regional economic community with the fruits of labor shared by one and all,” she added.

The Asean CSR Network, which supports the advancement of corporate social responsibility in the region, and NUS, Singapore’s flagship university, did the study as part of the network’s “Integrity Has No Borders” initiative and supported by the United Kingdom’s Foreign and Commonwealth Office Prosperity Fund.