Growing weeds without getting Rody’s ire 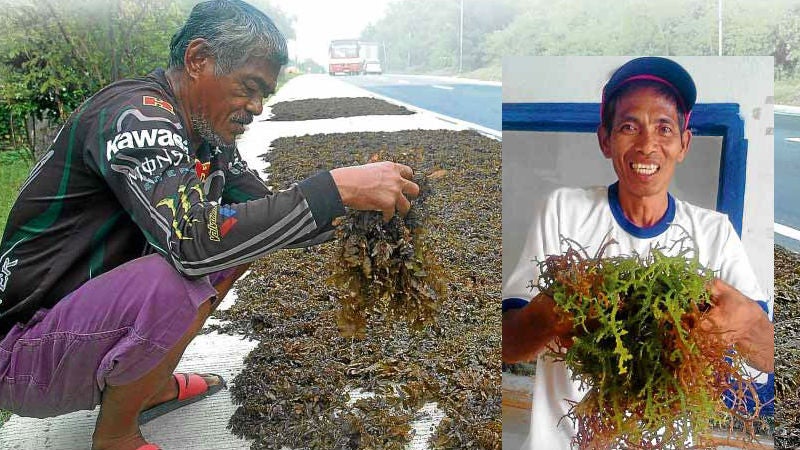 A SEAWEED gatherer dries his harvest along the highway in San Fabian, Pangasinan. Photos by Yolanda Sotelo

DAGUPAN CITY—There is a kind of weed that farmers can openly grow without getting into trouble with the police.

Seaweeds are now drivers of a major industry, although their full potential remains untapped in the country, said Alfredo Pedrosa, president of the Seaweeds Industry Association of the Philippines.

“We have total farmable area of 200,000 hectares along the coastlines, of which only 60,000 are used for seaweeds. The municipal waters consist of 15 kilometers from shoreline but seaweed farms are located only up to the second kilometer. What about from the third to the 15th km? We can put up seaweed farms there,” he said.

Pedrosa talked about the challenges and market opportunities of seaweeds during the 1st national aquaculture summit held here on July 7-8.

The summit was a joint project of the Bureau of Fisheries and Aquatic Resources and the Philippine Association of Fish Producers Inc.

The bulk of the production comes from the Autonomous Region in Muslim Mindanao, followed by Mimaropa, Zamboanga Peninsula, Central Visayas and Western Visayas regions.

Despite the low production, seaweeds accounted for 70.20 percent of the country’s aquatic exports. It also supports 200,000 families (or 1.2 people). Workers in the seaweed industry earn almost the same as the daily wage prescribed by the government.

Pedrosa said marketing the Philippine seaweed abroad was not a problem as “it is a brand by itself.”

“When you go international, when you talk about (Philippine) seaweeds, although our production is low, it always has a premium because of good quality,” he said.

“It is a reputation which we built over a long period. The real challenge on our part is to produce, then the market will take care of it.”

However, farmers engaged in seaweed production have started to age.

“There is a need to replace them with new generation of farmers who have the capability and expertise,  those who have the technical requirements of the trade but at the same time have innate knowledge of entrepreneurship. Not many of the present generation wants to get into serious seaweed farming,” Pedrosa said.

“So we have to make it attractive to the millennials by way of entrepreneurship. That is the missing link,” he said.

Most Filipinos are more familiar with “lato” or “arorosep,” the grape-like variety of seaweed which is eaten as salads, but there are plenty of seaweeds that can be grown in the country, Pedrosa said. He cited as example the “kappa” (Kappaphycus alvarezii), “euchemia,” “ulva,” “sargassum” and “gracilaria.”

“We (attribute) seaweeds (with) food application. We are missing the bigger picture—their non-food use. We talk about sanitation and safety which are basically the requirements of the food industry. But what about the industrial application where the requirements are not as stringent as that of food like fertilizer?” Pedrosa said.

“Seaweeds are proven to be good fertilizer. You just teach the farmers how to apply it so they won’t buy inorganic fertilizer and will just make their own fertilizers out of seaweeds,” he said.

Seaweeds are also important in the pharmaceutical trade, the animal feeds industry and as biomass for biogas and bioethanol production.

Gracilaria, which could potentially grow into a P100-million business, can be grown in ponds and may co-exist with “tilapia,” shrimps and “bangus” (milkfish).