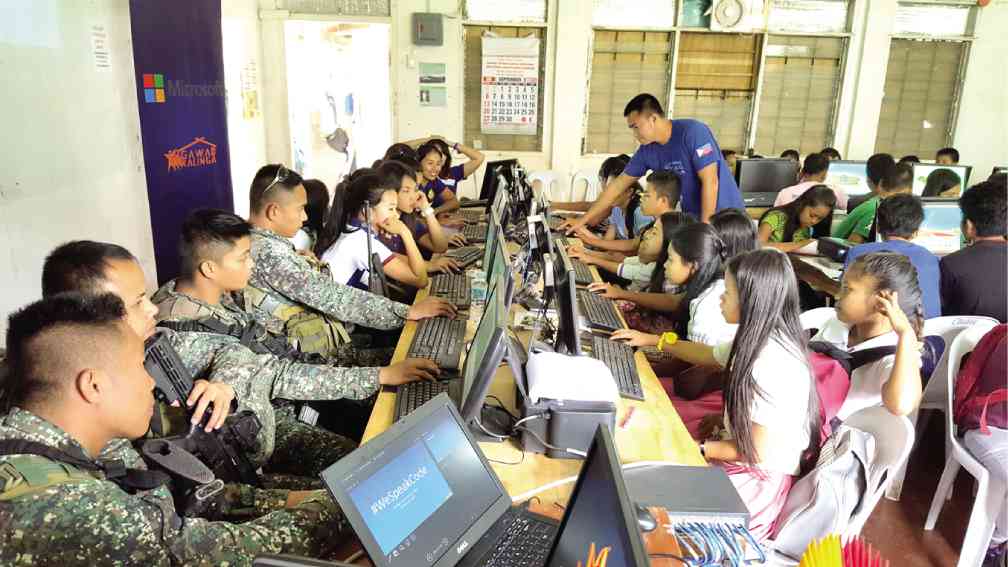 HOUR of Code tutorials at Upi Agricultural School in Maguindanao. Soldiers deployed in the area and youth from the Teduray and other tribes attend the classes.

Empower every person and every organization on the planet to achieve more.

Thus says Microsoft’s mission statement, words expressing the company’s fundamental canon of helping people realize their full potential so they can have a better life and a brighter future.

To help achieve this ambitious goal, Microsoft brought to Asia its Microsoft Philanthropies program, which was launched last month in Singapore.

During the summit that accompanied the launch, some of the most serious problems that the world faces today and what could be done to address them, especially in societies where gender inequality and youth unemployment remain prevalent, were discussed.

There are many places in the world where women are not allowed to move and work freely, and young people lack basic skills needed in the 21st century.

If they are given enough access to technology, where women can learn social entrepreneurship, and the youth can be taught computer skills, they can have a bigger chance of improving their lives, Snapp observes.

“We [should] think about ensuring that both young people and people already in the marketplace learn basic skills that they need in the 21st century,” Snapp adds.

The Economist’s Intelligence Unit’s study ‘Education to 2030’ predicts that “with the increasing use of technology, the jobs of the future will demand a different mix of skills. Science, technology, engineering and mathematics (STEM) will feature prominently in that mix and the economies that perform best are those that, annually, graduates the most students with STEM degrees…”

In line with this forecast, Microsoft is reaching out to the young generation through YouthSpark, a cross-company initiative that has empowered more than 300 million youths around the globe. YouthSpark’s programs give the tools and training to help build digital skills and explore how computer science can help the youth go further.

An easy and attractive way to teach the youth about computer science is through Hour of Code, a tutorial program where students learn how to create software applications. It is a partnership between Microsoft and code.org and is one of the programs offered under YouthSpark. Hour of Code tutorial introduces students to basic computer coding concepts, and uses characters and concepts from the popular video game Minecraft.

In the Philippines, almost 900,000 youths have already benefited from the YouthSpark program.

Partnering with non-profit organizations across the globe has been Microsoft’s way of ensuring that it reaches as many communities as possible, both through technology and skills-based volunteering. Microsoft has donated software as well as hardware to communities to help people learn more or improve their computer skills. The company also encourages its employees to do skills-based volunteer work, where they not only give their time and effort, but also their expertise in several fields such as marketing, finance, law and engineering. 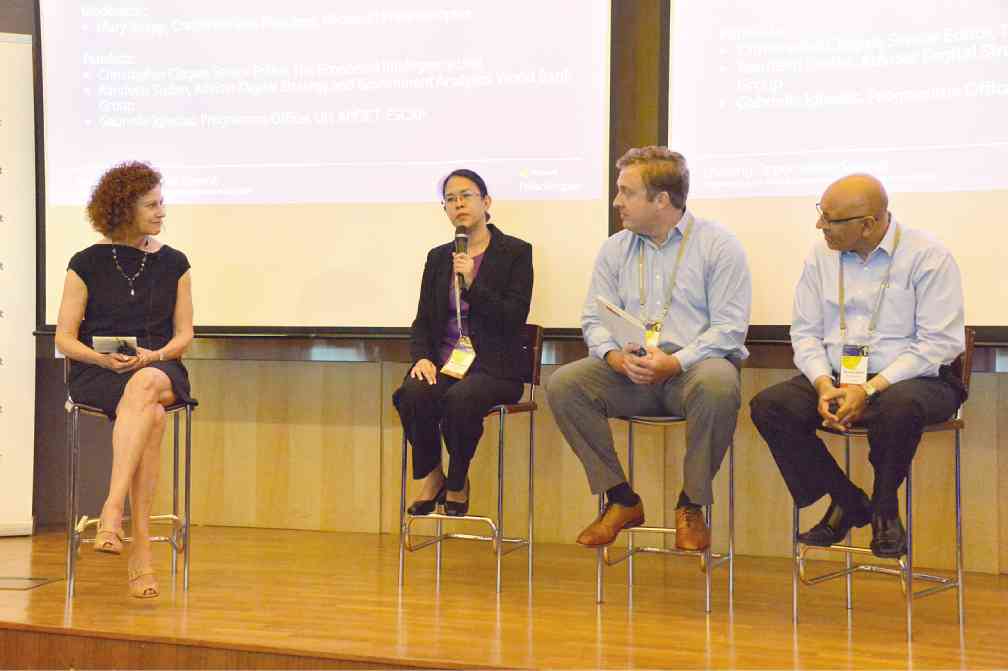 One of Microsoft’s partners in the Philippines is Gawad Kalinga (GK). Working together for seven years, Gawad Kalinga and Microsoft have touched various communities, from Sagada in the north to Camp Abubakar in the south.

“With Microsoft, we’ve been able to bring coding to tribal communities, all the way up in the north, where Sagada is. We’ve also been able to bring it to Camp Abubakar. Not many people have been there, but Microsoft and GK have been there. We spent five whole days, teaching from the most basic of concepts, all the way through to MS Office, basic troubleshooting, fixing computers, coding. Although the program started with the youth, all the other members of the communities came in,” shares Isabel Santos, Gawad Kalinga corporate shared services head.

The association with Microsoft also led Gawad Kalinga to a partnership with Thomson Reuters, a multinational mass media and information firm.

According to Santos, the communities where Gawad Kalinga held the Hour of Code and YouthSpark programs have limited to no access to computers on their own.

“We knew that there were some communities, like Camp Abubakar, where we would be able to teach coding, but they would never see a computer again. What would be the whole point of even bringing it there if it’s a one-time thing. For kids, you open their minds to these great things but then you realize, ‘I wouldn’t be able to reach my dreams because there’s nothing here, there’s no computer within a mile of where I live,’” she says.

But the partnership with Microsoft and Thomson Reuters resulted in donations of software and computers to Gawad Kalinga for the continuity of computer science education in rural communities across the Philippines.

The donation of computers also coincided with the release of MS Windows 10, giving the recipients first access to the company’s latest software. That in itself is a statement of the commitment to make sure it makes a relevant and lasting impact on the communities, Santos says.

Shift from farming to IT

According to Santos, parents from rural communities have actually been very supportive of their children’s interest in computer science.

“Parents are encouraging the kids … to go to IT for a better future, instead of farming. Food security is one of the largest issues in the world, and if we don’t have farmers, we have nothing to eat. But we have to integrate IT and computational thinking into almost everything we do,” Santos explains.

“It’s not a matter of convincing everyone to shift to computer science. We do feel that computer science is a very important course to take because it drives the future as far as technology is concerned,” adds Raul Cortez, Microsoft legal and corporate affairs director. “However, we also look at it from the perspective that we rely on different industries.  And these different industries, like agriculture, they can be driven by technology. So there’s no need for people to be well-versed in computer science,  but they need to understand how to utilize technology in the fields that they work in.”

To address gender inequality in terms of career opportunities, Microsoft Philanthropies works with several institutions such as the United Nations that focus on empowering women across the globe. UN has launched Women and ICT Frontier Initiative (WIFI), which helps women make the best use of information and communications technology (ICT)  to empower themselves.

In Sri Lanka, the target beneficiaries are war widows, giving them the push to rebuild their lives with the help of ICT. In Cambodia and the Philippines, women who own small village stores will be the focus of WIFI.

“Women empowerment does not mean we get rid of the men. What it means is we get equal opportunity to compete for the same jobs. We don’t want special treatment of women. What we just want is a fair chance for women, women entrepreneurs, women who have business in ICT,  to be able to compete for the same type of procurement by government or private sectors or the same market space,” explains Gabrielle Iglesias, program officer of the UN Asian and Pacific Training Center for Information and Communication Technology for Development-Economic and Social Commission for Asia and the Pacific.

A study by UN APCICT-ESCAP shows that women entrepreneurs are very keen on increasing their role in society. They already  invest in society, re-invest part of their earnings for their children’s education, their family’s health, they help their community.

“They are not only after making the bottom line, but they also want to make a difference. We want to keep these [women] entrepreneurs going, we want them to have success so they could continue … helping their families, their society and themselves,” Iglesias says.

Iglesias cites Myrna Padilla, a Filipina IT entrepreneur. Padilla used to be a caregiver in Hong Kong. Fortunately, her ward taught her to use the computer and to go online.

She then returned to the Philippines and opened her own internet cafe. She now does business process outsourcing (BPO) and hires professionals.

Knowledge in technology can also be beneficial for micro and medium entrepreneurs. 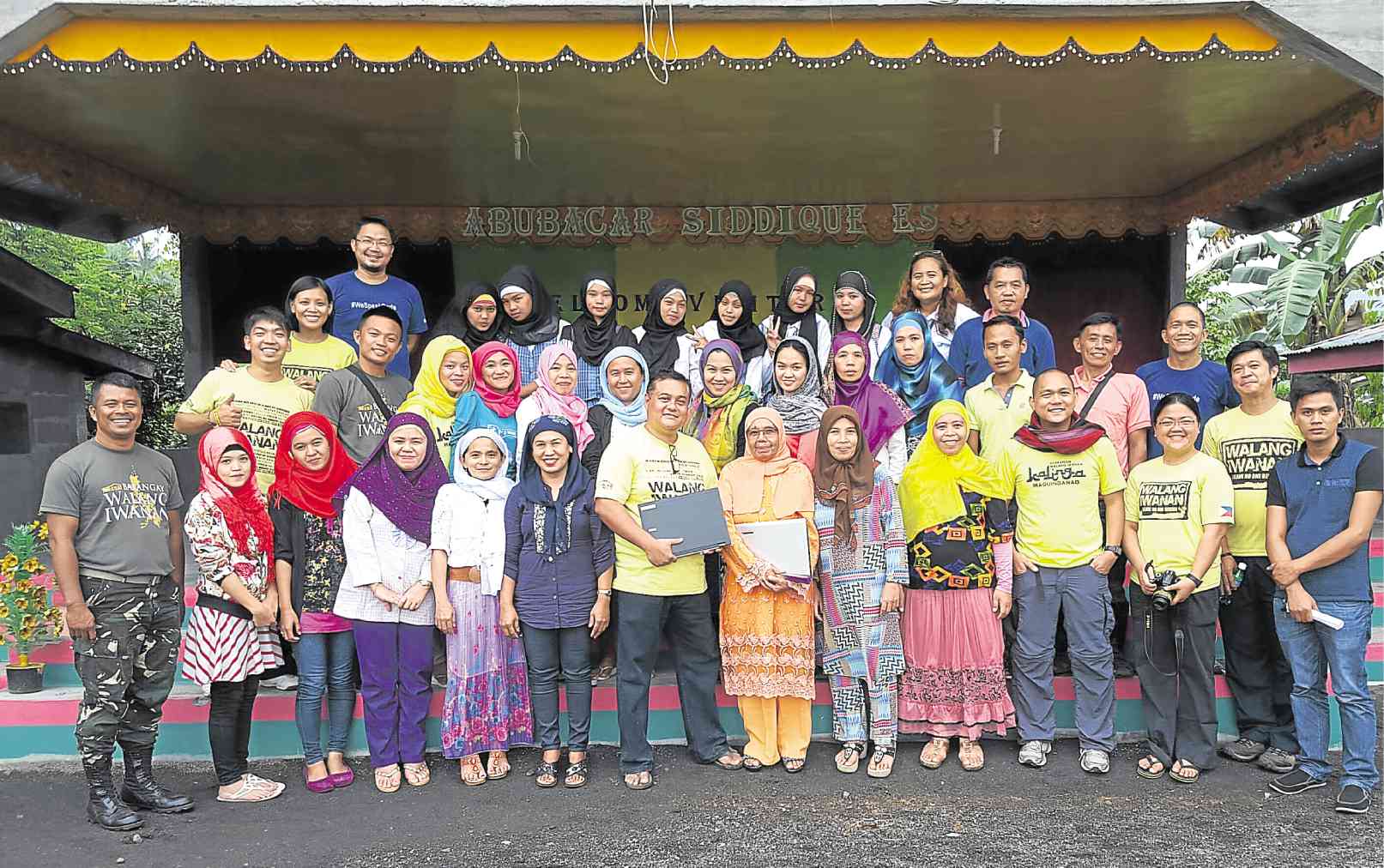 MICROSOFT and Gawad Kalinga taught computer and coding skills to the locals in Camp Abubakar in Maguindanao.

In the Philippines, most women entrepreneurs are into sari-sari or variety stores. With the help of technology, they can use their cellular phones to handle their business and finances better. Most of the cellular phones today have apps that could help do inventory, balance incomes and expenditures, to name just a few.

Then for the members of the older generation who are averse to learning about technology, Iglesias says there is a program for them, too.

“The aversion to technology usually just comes in from unfamiliarity. There are ways to overcome it. One is to get their children to teach them, and peer-to-peer learning as well, so once you succeed with one or two owners, they will get more receptive to learning. They could teach other sari-sari store owners on how to use the same technology,” Iglesias says.

Improving business prospects through their own mobile phones could be something as simple as learning how to advertise on social media, or getting orders via text messages from their customers.

WIFI program will be launched in the Philippines in the last quarter of 2016.

The program will not just be for sari-sari store owners, according to Iglesias, it will also be open to other micro-, small- and medium-scale entrepreneurs.

“The idea is that [the entrepreneurs] already have established some business, and by teaching them ICT, they can improve their prospects, increase their market reach, their efficiency and they will be able to listen to the demand of the public and be more competitive,” she says.

By doing so, they will achieve more, just as Microsoft envisions.