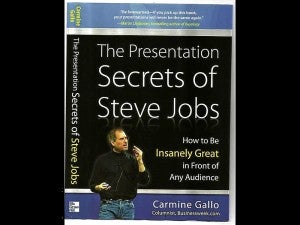 Presentations using multi-projector and a screen have become a useful tool for product launches, advocacy, exhortation in churches, and mega conferences. For its celebrated The Inconvenient Truth documentary, shown in many countries, Al Gore won the Nobel Peace Prize. This just proves that presentations have come of age!

“Steve Jobs uses presentations as a transformative experience,” author Gallo begins. “In fact he has been giving awe-inspiring presentations since the launch of Macintosh in 1984.

“He has transformed the typical, dull, technical, plodding slide show into a theatrical event complete with heroes, villains, a supporting cast, and stunning backdrops.”

The common terms used to describe Jobs presentations are magnetic, captivating and charismatic, according to the book author. And the narrative about how he created adoring fans in every presentation is enough proof of his extraordinary skills.

The first thing Jobs does is to come upon the big point: “What is the one big idea you want to leave with your audience.” It’s like advertising really or the “lead” of a journalistic piece.

And once you have found the central idea, give it some “pathos,” a word first used by the father of public speaking, Aristotle. Jobs believes in what he invents and what he is selling, so his passion simply surfaces in his presentations.

The other reason for that “pathos” is his belief that he is not selling just any product. Each time, he is selling a dream. It is enough to suspect that the author is so enamored with Jobs that he is gushing with lofty words.

And yet, he has read Jobs accurately and clearly, especially when he heard him say, “Your audience doesn’t care about your product. People care about themselves.” This is actually the first principle in marketing, taking the point of view of the customer. But, Jobs himself has articulated this belief many times, and he has introduced products that are really the stuff of dreams.

I could not blame the author in using evangelical language in describing the reason behind the extraordinary success of Jobs’ presentations – and, of course, his generation of products.

The author prescribes that you “develop messianic sense of purpose,” but that, of course, brings a revered truth to the workaday world of business.  And then he continues by saying, “Give your piece an evangelistic zeal.” This is just hype. Our marketing people are now borrowing words from the fire and passion of evangelicalism!

Actually, Jobs tells us where that passion comes from: “You’ve got to find what you love. Your work is going to fill a large part of your life, and the only way to be truly satisfied is to do what you believe is great work.” Jobs has found his mission in life, and he has just retired from it. It is our wish that he should channel such passion and devotion to something more lasting.

The author extols the brevity of Jobs. It proves once again the truism that the masters are economical with words. The neophytes use a super abundance of words. One classic case of simplification is this: On the introduction of the MP3 player, Steve Jobs said: “iPod. One thousand songs in your pocket.” What else is there to say?

In our marketing class at the Asian Institute of Management, the professor always emphasized the “benefit,” not the “features” of the product.

The feature could have been this, according to the author: “Today we are introducing a new ultraportable MP3 player with a 6.5-ounce design and a 5 GB hard drive, complete with Apple’s legendary ease of use.”

The book has an abundance of the scripts written by Jobs for his own presentation. A sample of Jobs’ keynote presentation for iPhone shows his word economy: On the right hand column for slides the only word you read is “Smartphone.” Steve’s words on the left hand column are: “The world’s advanced phones are called ‘smartphones,’ so they say.”

And all throughout the 14 slides, Steve’s on-the-slide words were minimalist.

Many experts in presentations and even in public speaking and preaching say the audience should continue to look at the speaker and not on the inanimate screen.

Jobs presents the most convincing public speaking style. He is really the product of advertising and public relations. He makes a “hero” out of a product. And yet he does more. He introduces a villain. It could be a competitive, dull (according to him) and obsolete product or  a-less-than challenging organization like Microsoft. (That’s the opinion of Steve, if I may quickly add.)

Steve obeys the 10-minute rule, says the author. A new research in cognitive functioning, the brain gets bored after 10 minutes. Thus in a 30-minute presentation, the guru punctuates his presentations with demonstrations, a second or a third speaker, and video clips. “Jobs is well aware that even his gifts of persuasion are no match for a tired brain constantly seeking new stimuli.”

In 2008 “Let’s Rock” Presentation, Jobs immediately made headlines with this opening slide: “The reports of my death are greatly exaggerated.” And then he moved on with the business at hand launching iTunes.

“Use plain English,” says the author. She interjects this in relation to the simple (but not simplistic) presentations of the Mac founder. Consider what Jobs said: “It’s the world’s thinnest notebook.” According to the author, Jobs could have said: MacBook Air measures 0.16 inch at its thinnest point, with a maximum height of 0.76 inch.” Jobs uses his scriptwriters, but always has the last say.

As in any good presentation, there must be the element of surprise. What left the audience gaping was when, at launch moment of the Mac Air, he did not use the fire-and-smoke and noisy moment, but he just strode on the stage, took an envelope – and voila! – fished out the very thin Mac Air that fits in snugly in a brown envelope.

That’s the “aha moment,” as AIM and other marketing professors would put it. The author calls it the “holy …….” moment, a word that does not fit the prestigious page of this paper.  The exclamation could have been “OMG! That’s thin!”

So much like a lesson in public speaking or sermon delivery, author Carmine Gallo also tackled the gestures that go with the slides and the words of Steve Jobs. From the scripts reproduced in the book, Jobs uses many hand gestures – and yet unlike politicians and evangelists who puncture the air mercilessly with their gesticulations!

She recommends eye contact, open posture and plenty of hand gestures. “An open posture simply means he has placed nothing between himself and his audience. He uses more hand gestures, and author defends this Jobs style. She says: Some old fashioned speaking coaches still instruct clients to keep their hands at their sides. I’m not sure where this started, but it’s the kiss of death for any speaker hoping to captivate an audience.

“Make it look effortless,” is an advice given to professionals of all human endeavors—singing, swimming, driving, ballet dancing and, this time, speaking. The book says this can be achieved by practice, practice, practice!

Jobs’ speeches and presentations show that he passionately believes in what he does. He calls it the “passionate pursuit of excellence.”

Jobs the inventor, the thought leader, the marketing guru – stands 10 feet tall as an outstanding presenter. This book, written by a communications-skills coach for the world’s most admired brands, has given the readers an inside view of the tough-act-to follow skills of Steve Jobs.

It is not fundamentally different from the books on public speaking, except that the author has a “hero” in his book, Steve Jobs himself, who has been a phenomenon in many ways. This book shows us the ultimate communicator in the inventor of Apple and Macintosh computers – and iTunes.

Thus, it has become a compelling piece because the subject is someone who really changed the way we process, send and deliver information and feelings. He has changed the world.

He just announced his retirement, and yet the world is thankful that this genius cares a lot about how his inventions would improve the way we go about the business of life. Grab this book from the shelf. This book copy I have is a gift from a friend who bought it from Singapore’s largest bookstore. ([email protected])