RLC announced on Monday the opening of a new lifestyle wing and business process outsourcing (BPO) offices in Robinsons Place Ilocos, bringing the gross leasable area of the mall to 53,600 square meters from 20,500 sqms previously. The new amenities will open to the public on July 14.

“The present success of the North Wing of Robinsons Place Ilocos has prompted us to expand the mall to cater to more shoppers,” RLC president Frederick Go said in a press statement on Monday.

Go said the new south wing of Robinsons Place Ilocos covered a much larger area than the existing mall. This is seen as a vote of confidence on the “premiumization” of Ilocano consumers.

“Robinsons Place Ilocos is the first full-service mall in the province and now it is also the first premier lifestyle mall in Ilocos Norte,” said Go, adding that this hub offered a wide array of retail and dining options, cinemas, promenades and open areas for various fun activities.

San Nicolas is deemed as the center of business among all other towns in Ilocos Norte with local businesses coming from the retail, services, manufacturing, real estate leasing, printing and advertising, and distribution sectors.

The mall expansion with mixed-use development (south wing) is located beside the original mall (north wing) that was opened in December 2009. The new wing is a four-storey building.

The first two floors of the Robinsons Place Ilocos south wing houses the mall expansion, covered parking and part of the BPO office space. The third and fourth floors are reserved for BPO offices as well as more parking slots.

The south wing is anchored by Toys ‘R Us, Daiso, and three new state-of-the-art cinemas in addition to the three existing cinemas in the North Wing. Shops will include popular local and international brands such as H&M, Uniqlo, Cotton On, Giordano, Payless and Watsons.  It will also feature gadgets stores like Samsung, Oppo, Cherry Mobile as well as health and wellness outlets such as David’s Salon and Fresh Salon and Spa.

Popular casual dining restaurants and coffee shops will also be available at the food gallery located along the new mall’s bridgeway. The new wing will also have an al fresco area with beautiful landscaping and water jets that reaches up to 1.5 meters.

For the greater convenience of residents and shoppers, the redeveloped area hosts the Department of Foreign Affairs’ region 1 office that will handle the application and renewal of passports. Also located at the redeveloped area is the Lingkod Pinoy center for Bureau of Internal Revenue, Social Security System, Government Service and Insurance System and Philippine Health Insurance Corp.

“The site of Robinsons Place Ilocos makes it ideal for BPO offices since it is within close proximity to several universities- 5 minutes away from Laoag City and 20 minutes from the airport, and is easily accessible from the National Highway,” said Go.

Like other Robinsons BPO developments, the Robinsons Ilocos BPO office will have its own exclusive lobby and elevator support, space for recruitment center at the ground floor and a large office floor plate of over 3,100 sqm. 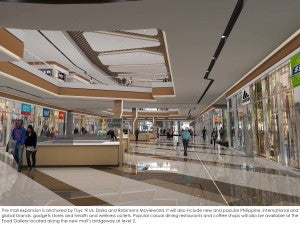