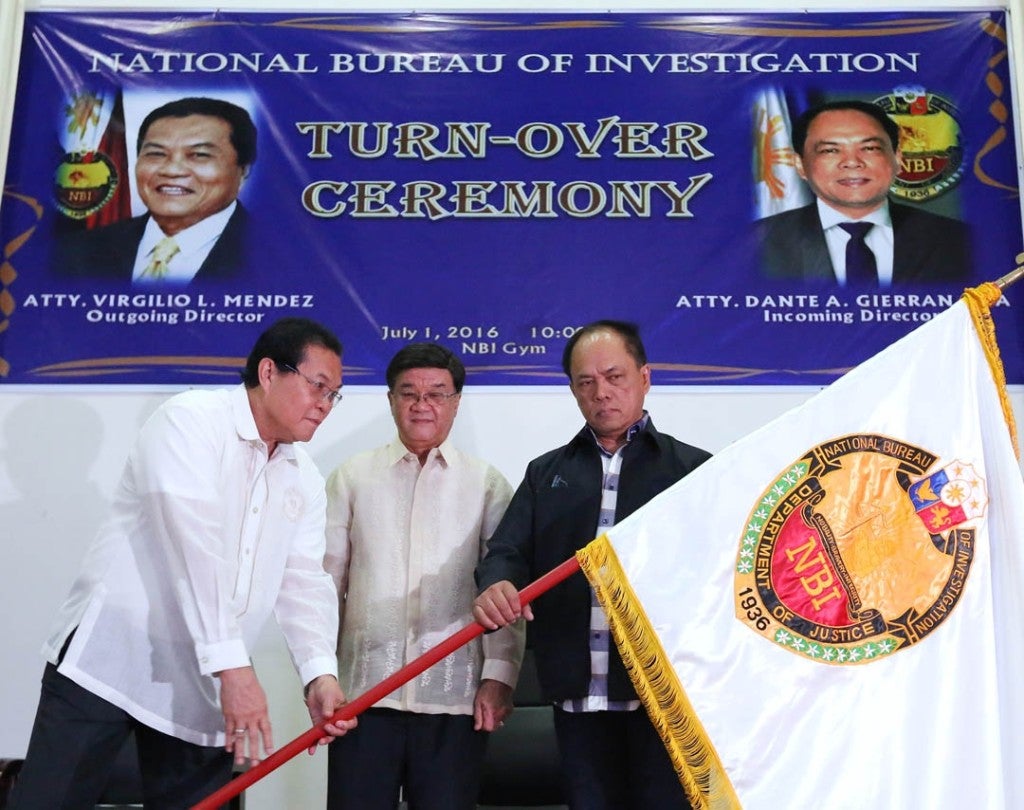 Newly appointed NBI Director Dante Gierran during the turn over ceremony with outgoing sec. Virgilio Mendez at the NBI office in Manila. With them is new Justice Secretary Vitaliano Aguirre. INQUIRER/ MARIANNE BERMUDEZ

“As of the present, we are to honor existing contracts. The sanctity of contracts must be respected,” Aguirre said.

Aguirre exercises administrative supervision over the Office of Government Corporate Counsel and attached agencies of the Department of Justice (DOJ).

He, however, said that such assurance is without prejudice to possible review if necessary.

“Because we just assumed office, there is no directive yet to review any particular contract,” Aguirre explained.

Port developers who earlier expressed optimism in doing business with the Bureau of Customs (BOC) said the move by the Duterte administration came just in time for the local port and logistics business, which declined in terms of global competitiveness based on a World Bank (WB) study.

They earlier complained of a series of BOC directives issued last year, saying it introduced uncertainties to live contracts with the Philippine Ports Authority (PPA).

According to port developers, these BOC memorandums encroached the PPA’s regulatory authority in licensing port operators and which port stakeholders also considered as a midstream change in rules.

In the WB’s Logistic Performance Index (LPI) biennial report entitled “Connecting to Compete 2016: Trade Logistics in the Global Economy,” the Philippines fell 14 places this year to 71st place out of 160 countries from 57th in 2014.

The report ranked countries based on key criteria of logistics performance, including border clearance efficiency, infrastructure quality, timeliness of shipments, ease of arranging competitively priced shipments, competence and quality of logistics services and ability to track and trace consignments.

The Philippines’ score in the WB report dropped in all criteria except in timeliness of shipments, which jumped to 70th this year from 90th in 2014.

The survey showed that on the criteria involving customs services, the country’s ranking dropped drastically.

In the efficiency of the clearance process that included speed, simplicity and predictability of formalities by border control agencies including customs, the country declined to 78th place from 47th in 2014.

For the quality of trade- and transport-related infrastructure – such as ports, railroads, roads, information technology – the country decelerated to 82nd from 75th previously and also declined to 60th place from 35th in the ease of arranging competitively priced shipments criteria.

For competence and quality of logistics services, for example transport operators and customs brokers, the country slipped to 77th from 61st.

It also fell to 73rd from 64th on the ability to track and trace consignments.

“The LPI plays an important role in raising awareness, and is often the starting point of a policy dialogue,” Daniel Saslavsky, trade specialist and co-author of the report, said.

For the second time in a row, Germany is the top performer with a score of 4.23, while Syria ranked last with 1.6. In the Association of Southeast Asian Nations, the Philippines placed seventh, with Singapore still leading./rga