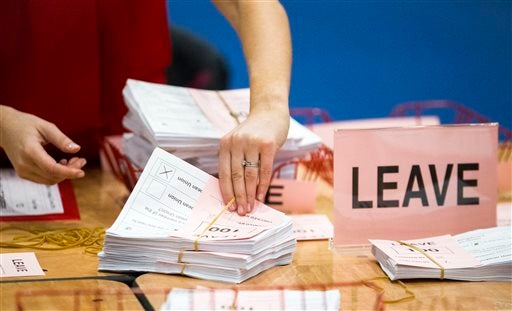 A teller counts ballot papers at the Titanic Exhibition Centre in Belfast, Northern Ireland, after polls closed in the EU referendum Thursday, June 23, 2016. Britain’s referendum on whether to leave the European Union was too close to call early Friday, with increasingly mixed signals challenging earlier indications that “remain” had won a narrow victory. (Liam McBurney/PA via AP)

While opinion polls have said the race is neck and neck, markets worldwide have rallied in the past week as a general consensus emerged that the country would vote to remain.

However, sterling, which had touched a 2016 high of $1.50 barely two hours earlier, slumped to just below $1.43 after returners announced the northern town of Sunderland had seen a stronger performance than expected for the pro-exit camp.

READ: IMF warns of ‘negative and substantial’ impact of Brexit

That came after news that nearby Newcastle had seen a smaller-than-forecast win for “Remain”.

Investors took fright at the initial results, sending them rushing for lower-risk investments, with the dollar tumbling to just above 103 yen from around 106.80 yen.

The pound later edged back up to $1.4545 and the greenback recovered slightly to 105 yen, but analysts said there would likely be more volatility through the day.

“After the early confidence, we could be getting a dose of realism that’s causing some reasonably skittish market movements,” Jeremy Stretch, head of foreign exchange strategy at Canadian Imperial Bank of Commerce in London, told Bloomberg News.

“It does look like the margin between the two sides is going to be relatively tight, and accordingly sterling volatility is going to remain elevated until we get a more definitive picture.”

Stocks in Tokyo rose almost one percent soon after opening but pared their gains as the morning wore on, sitting 0.2 percent higher, while Sydney turned negative to fall 0.3 percent. Seoul was up 0.3 percent, having swung to and fro. Wellington was 0.4 percent higher.

Highlighting the sense that the race will be tighter than thought, leading British bookmaker Betfair slashed the odds on a win for the “Remain” to 66 percent from 90 percent.