Constant innovation will remain the Philippine retail industry’s significant growth driver in the coming years, according to Philippine Retailers Association (PRA) during its 19th Outstanding Filipino Retailers and Shopping Centers of the Year Awards held recently at the Marriott Hotel in Pasay City.

The retail industry has contributed about 18% of GDP in 2015 alone. PRA Vice Chairman Roberto Claudio cited OFW remittances, BPO earnings, increased consumer spending power, and tourism as key contributors to this development. Tourism, in particular, is projected to attract 12.5M tourists by 2022. This means demand for shopping, leisure and entertainment will increase tremendously.

Claudio said that although the retail industry has been experiencing growth over the last three years, it still has to address the challenge to keep the consumers coming to the stores because of the growing popularity of e-commerce. “We need to go beyond the idea of selling. We have to provide excellent customer experience for them to keep coming back to our stores,” he said.
Claudio gave SM as an example on how to meet the demand because of the company’s continuous investments in shopping, hotel and conventions, events and entertainment. “SM never stopped innovating. It keeps reinventing itself. In retail, you can’t afford to be complacent once you meet your sales targets. Just look at how many times SM innovates, how they keep reinventing their product categories, how they continue training their people,” Claudio said.

PRA Chairman Emeritus Samie Lim believes that SM’s success is driven by SM founder Henry Sy, Sr.’s ability to see beyond selling and marketing. According to Lim, Henry Sy was instrumental in bringing the Asian Retailers Conference and Exhibit to the Philippines in 1993 at the then newly built SM Megamall. There, he remembers seeing Henry Sy, exchanging ideas with, and learning from, the delegates who were some of Asia’s best retailers.

“Henry Sy is a true visionary. He doesn’t see things for what they are, but for what they can become,” Lim said. “That’s how SM became a leader. The company’s tradition of learning from the best retailers around the world continues until today. That’s the spirit of entrepreneurship.”

Today, the tradition is carried on by Hans Sy as president of SM Prime Holdings. “This win is a tribute to the entire team whose hard work has helped build the SM brand in the way it is recognized today,” said Hans Sy about the various awards SM brought home from the PRA. “It is a win that will help keep us on track toward maintaining innovative products and services.”

SM Megamall went home with another Shopping Center of the Year award, which automatically elevates it to PRA’s Hall of Fame. It was also given a special award for Best Retail Architecture awarded by the Southeast Asia Property Awards. 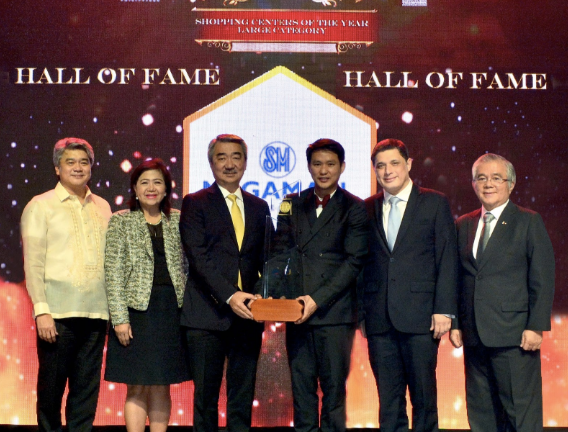