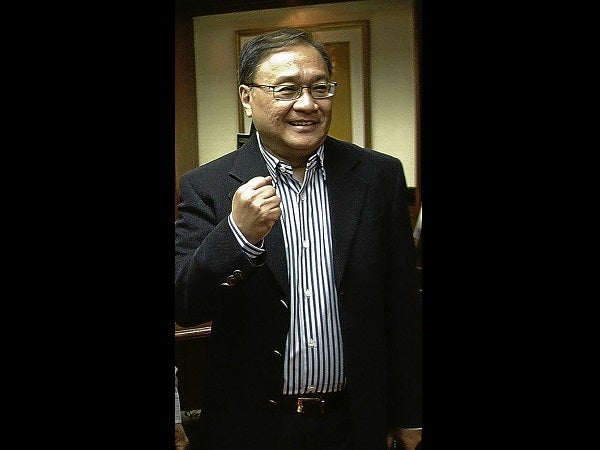 DAVAO CITY, Philippines—Get out of the way.

Speaking to provincial journalists whom PLDT invited to Makati City for its annual stockholders meeting on Tuesday, Pangilinan said the company’s digital shift was likely to succeed if the government would not meddle too much.

Some people, including people from the government, do not understand the implementation of major infrastructure needed to transform PLDT and Smart’s services into digital, and they could block the huge project, expected to be operational by 2018, because of lack of understanding of it, Pangilinan said.

He said people from the government could help by not dipping their hands too much into the project.

“The government’s share is to get out of the way,” he said.

PLDT is linking up with Globe Telecom to buy Vega Telecom Inc., the telco business of San Miguel Corp. (SMC), for P69.1 billion.

The joint venture will improve the internet services of PLDT and Globe, the two companies said in separate statements announcing the partnership last month.

On Friday, however, the new antitrust body Philippine Competition Commission (PCC) said the PLDT-Globe deal would not be approved until after a comprehensive review.

“A comprehensive review includes a determination of the relevant market, whether there will be substantial changes to the market structure, and the potential impact of the transaction on public welfare,” the PCC said in a statement.

The regulator’s decision could spur PLDT and Globe into taking legal action, as the two telcos consider the transaction approved under the PCC’s own “transitory” guidelines.

Under those guidelines, deals closed after the new competition law took effect but before its implementation rules take effect are deemed approved.

The PLDT-Globe deal with SMC was sealed on May 30, four days before the publication of the competition law’s implementation rules.

PLDT and Globe said they filed the required transaction notices under the PCC guidelines so the regulator could no longer challenge the deal.

But the PCC said the transitory guidelines did not dilute its authority to review transactions, especially if required by national interest and public policy.

“The review is intended to ensure that the transaction will, in the end, result in sustained gains for the public by not restricting competition,” the PCC said.

The announcement of the PLDT-Globe deal came after President-elect Rodrigo Duterte warned the two companies in May that he would open the Philippines to foreign telcos if they failed to improve their internet services.

Despite its slowness, internet service in the Philippines is expensive, $18.19 per Mbps compared with the global average of $5.21.

To improve its services, PLDT is pouring billions of pesos for the shift to digital, and Pangilinan, in his speech to provincial journalists on Tuesday, stressed that no government funds were involved in the company’s investment.

“Whose money is being spent? It’s the private sector’s. There is no guarantee from the government, no government fund is involved, so get out of the way, period,” Pangilinan said.

“If ever the huge undertaking comes out lousy, it’s the company that will suffer the impact, to the delight of its competitors, and not the government,” he said.

If private projects fail, he added, “the government will not rescue us.”

Given the stiff competition in the digital industry, Pangilinan said, “we are mindful of other guys watching us.”

“We have to be on our toes. Somebody is watching us, like a wife, to police [our] ethical standards,” he said.

Improving the digital industry’s services will take time and lots of money, he said.

“The journey to the digital future will be long and the climb is steep,” he said.

Pangilinan said the considerable increase in capital expenditure showed the seriousness of the massive effort being taken to transform the PLDT-Smart network into the Philippines’ most extensive and data-capable infrastructure.

The undertaking, he said, has also forced PLDT to adjust its financial track for the next three years, like resetting its core income guidance to P30 billion following the partial sale of its shares in power distributor Manila Electric Co.

Pangilinan said he was optimistic that PLDT’s P30-billion core income is “(the) new base from which the company will rise.” With a report from Miguel R. Camus/TVJ