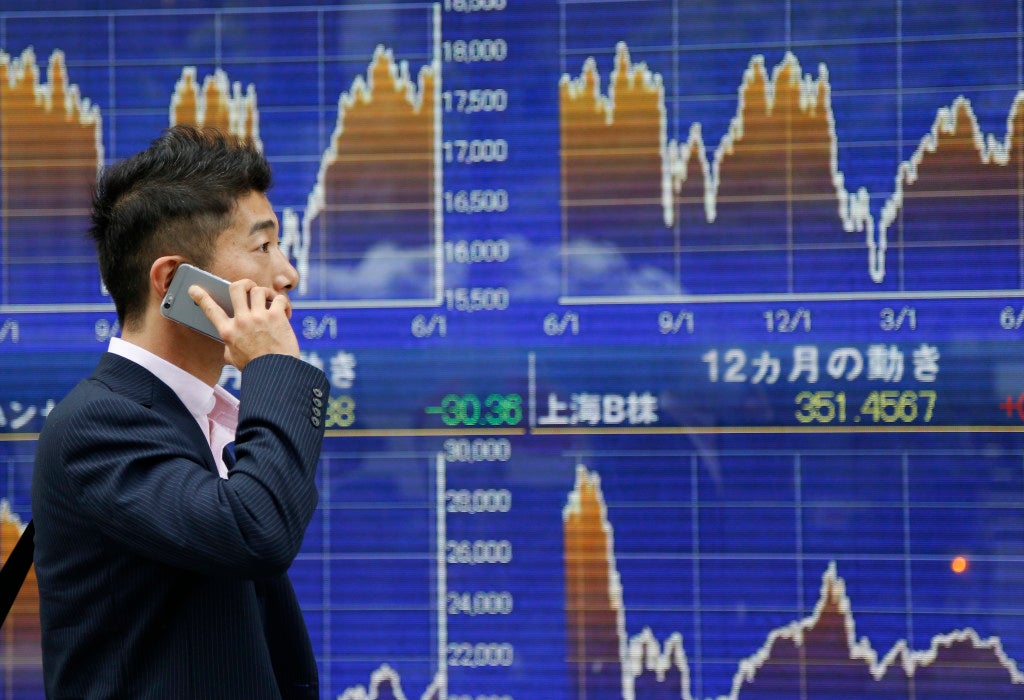 A man speaks on a smartphone in front of the electronic stock indicator of a securities firm in Tokyo on June 9. Asian shares were mostly lower Thursday despite gains on Wall Street as a weaker dollar negatively impacted Japanese stocks and investors weighed risks given the Federal Reserve’s cautious stance about tightening rates. AP

Global stocks fell on Thursday as investors worried about the health of the global economy given the Federal Reserve’s cautious stance about raising its interest rates. Financial markets were closed for holidays in China, Hong Kong and Taiwan.

ANALYST VIEWPOINT: “The Fed being more cautious about tightening rates should negatively impact stocks, since they are worried about the state of the economy and its ability to withstand higher interest rates,” said IG Market Strategist Bernard Aw. “Make no mistake, the cautious undertone pervades the financial markets.”

ECB warning: The president of the European Central Bank warned in a speech Thursday that the eurozone economy needs governments to make more reforms if it is to see higher growth. Mario Draghi noted the central bank could not heal the economy on its own and that reforms are needed in a region where aging demographics risks weighing on long-term growth.

South Korea’s economy: Bank of Korea surprised investors by slashing its key interest rate to a record low 1.25 percent for the month of June. The move is the first rate cut in Asia’s fourth-largest economy in a year. Most market analysts had expected the bank to lower interest rates later in the year, anticipating slower growth in the second half. Low oil prices have hit South Korea shipyards and other major exporters.

OIL: US crude shed 41 cents to $50.82 a barrel in electronic trading on the New York Mercantile Exchange. It jumped 87 cents on Wednesday. Brent crude, the benchmark for international oil prices, fell 48 cents to $52.03 a barrel in London. On Wednesday, it rose $1.07.