A SOW attempts to climb her cage as the swine is being fed at a small farm in Padre Garcia. PHOTOS BY CHRIS QUINTANA/CONTRIBUTOR

LOS BAÑOS, Laguna—Scientists from the National Institute of Microbiology and Biotechnology at the University of the Philippines Los Baños (Biotech-UPLB) have developed a protein-enriched copra meal that promises to provide a healthier yet cheaper animal feed.

The pilot scale production of the Protein-Enriched Copra Meal (PECM) will be housed in a new building to be put up with a P22-million fund allocation from the Philippine Council for Agriculture, Aquatic and Natural Resources Research and Development (PCAARRD).

Once completed by the end of the year, Biotech-UPLB would begin production of the PECM at a volume of one metric ton every three days.

In an interview after the groundbreaking ceremony on May 25, Pham said the PECM could help poultry and swine raisers who are struggling with the high cost of soybean, a major ingredient in animal feed mix.

Records from 2012 showed the Philippines had been importing about $500 million worth of soybean every year, PCAARRD said. The country’s swine and poultry industries require about 3.3 million metric tons of animal feed yearly, it said. 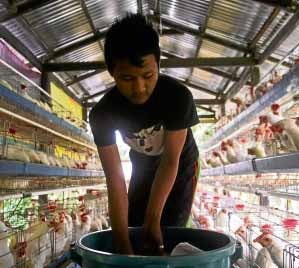 ALEX, a farm worker, prepares the feeds
for broilers at a small farm in Padre Garcia.

Through solid-state fermentation technology, the PECM is enriched with microorganisms that increase the protein content of copra meal, which is normally high in fiber but low in nutrients. PECM is seen to replace 40 to 50 percent of the soybean contained in animal feed.

“It can [bring] a lot of savings. Per kilogram of pork, [the PECM] is about 30 centavos cheaper [than the usual protein source],” Pham said.

The PECM uses waste products from coconut oil. “[And] we know that the coconut industry is the lifeblood of many Filipinos,” she says.

Pham said the PECM project was started a decade ago by her husband and former Biotech researcher, Chay Binh Pham. In 2012, the government, through PCAARRD, had allocated P8 million to fund the research.

In a separate interview, provincial agriculturist Marlon Tobias said feed mix for hogs usually costs P1,150 per 50 kg for starter pigs. A kilogram of soybean costs around P30 to P40, he says.

While the PECM is a welcome technology, Tobias, however, doubted the “palatability” of copra for swine. In Laguna, he says, most farmers use what they call “home-mix.”

Tobias says the provincial government, since 2014, has been using its own mix for its swine and native chicken. The mix uses 30 percent of darak (rice bran) and 70 percent knife fish.

This is another way to make useful the knife fish, a predator species in the Laguna Lake that threatens native aquaculture, he says.