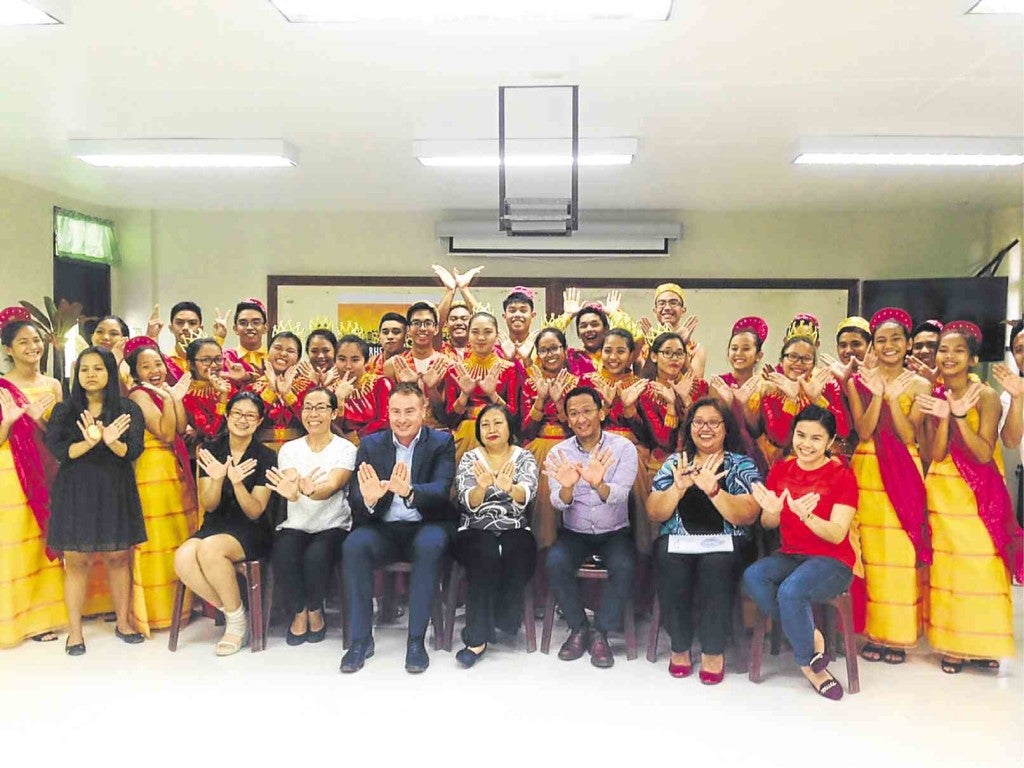 MEMBERS of the UP Rural High School glee club, Marife Maquera (second from left, seated) with Diageo PH head Jon Good (3rd from left, seated) put their hands together to form the “w” hand sign. Maquera, a music teacher, was among the 34 women selected by Diageo Philippines to train under Plan W, a community program to empower women through music. MARICAR CINCO/INQUIRER SOUTHERN LUZON

BAY, Laguna—Wearing costumes of glistening red and gold, theirs was a powerful ensemble that easily filled up a room in the University of the Philippines Rural High School (UP Rural) here.

Students, about 30 of them, had their eyes and ears glued to Marife Maquera, as she gestured to set the tempo. Their voices, sweet yet enchanting, captured the audience, who found their music a respite from the scorching summer heat.

“Sing, sing, sing,” Maquera says, as she wrapped up the choir’s performance. “We always pray that we inspire people to sing. Small and big gatherings, we perform with excellence,” she says.

Maquera, a 34-year-old music teacher at the UP Rural, led the school’s glee club on April 19 in a mini-concert here. They performed before executives of beverage company Diageo Philippines, led by company general manager Jon Good.

Maquera, from Los Baños town in Laguna province, was one of 34 women selected from different regions to participate in Plan W, a community investment program of Diageo. In partnership with Sing Philippines, the provincial outreach program of the Philippine Madrigal Singers, the women—grassroots music teachers to choir conductors—attended a week-long intensive training in September 2015 to enhance their skills.

The training culminated with Plan W scholars performing in a recital at the Philippine International Convention Center in October 2015.

To Maquera, fate had something to do with her being a Plan W scholar.

“The first time I asked permission from the [UP Rural] principal to join [Plan W], she did not allow me, as there was another [school] activity at that time,” she says.

Maquera says she would have given up her chance, until someone from Plan W contacted her and offered her a slot days before the training started.

“I had no idea how they got my number. But I asked permission again from our principal and this time, she allowed me,” she says.

It was not difficult for Maquera to qualify for the program. After all, she has been teaching music at the UP Rural and handling its youth choir since 2005. She has also been conducting for the adult choir of the UP Open University since 2010.

Maquera was a member of glee clubs and church choirs back when she was younger. She also finished a degree on music teaching.

Maquera teaches the UP Rural chorale a mix of music genres: folk, pop songs and even ethnic songs.

“[Handling an adult choir] is more challenging,” she says. “That’s 15 different adult voices, with different [music] foundations that need to sound as one.”

Good says empowering women is a thrust of the London-based company, globally known for its brands Johnnie Walker, Crown Royal, J&B, Buchanan’s and Windsor whiskies, and Smirnoff, among others.

In the Philippines, 45 percent of its employees are women while 35 percent hold top positions in the company.

“Women are very powerful [and] we want them to have a very strong voice in the community,” Good says. “In the Philippines, we’ve chosen singing because, I think it’s very obvious, Filipinos love to sing.”

Good believes women conductors and music teachers are unable to reach their full potential because of lack of resources. With Plan W, the first of its kind in the country, the firm is able to provide the right investment, he says.

The 34 Plan W scholars, he says, are expected to replicate the training in their own groups as well as in their communities.

“Promoting skills, employability and lifelong learning are keys to empowering women. If you tap into her passion, you give her the power to inspire the people around her and also show her capability of building a better future for herself,” Good says.

Diageo aims to empower 2 million women across the world by 2017, a “bold” yet feasible goal, Good says. To date, Plan W has reached out to more than 115,000 women across 16 countries, impacting more than 575,000 people globally.

“If she knows that she is a leader in her community, then she will always celebrate and live out this role,” Good says. “[And] when women are empowered, society progresses.”