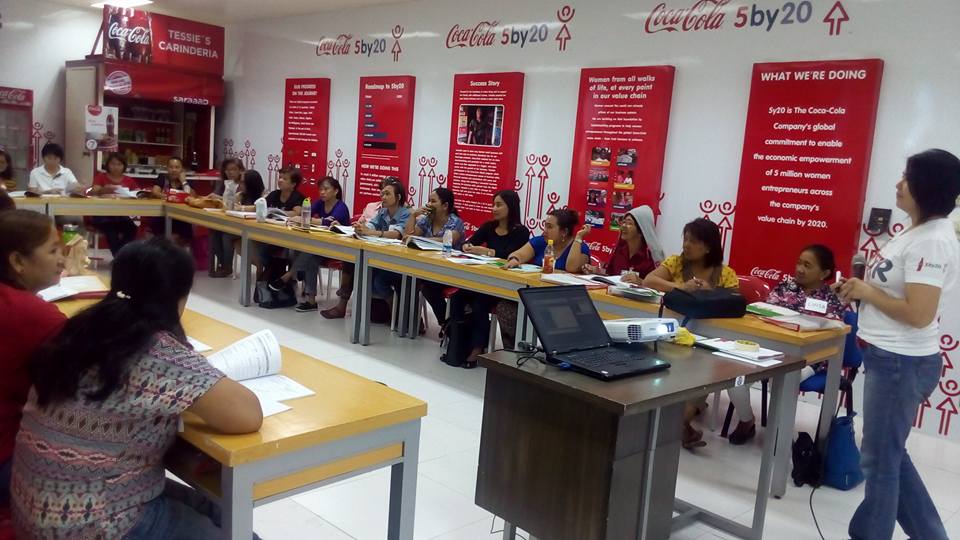 LEARNING NEW SKILLS. Women overseas Filipino workers and the relatives of other women OFWs spend Fridays at the STAR Center for Excellence facility at the TESDA Women’s Center to learn about entrepreneurship and the various skills needed to help them successfully manage their micro-enterprises like sari-sari stores and carinderias.

The 2013 Labor Force Survey of the Philippine Commission on Women estimates that 14.8 million Filipino women are part of the country’s labor force. This does not count women who are working abroad as overseas Filipino workers (OFWs).

For a lot of working Filipino women, the need to provide for the family is their top priority. To earn an extra keep, these women often resort to having a second career, doing “sidelines”, and for some, putting up a sari-sari store in their homes.

However, having businesses on the side oftentimes turn into monetary drains instead of supplementing the family budget. The many challenges women face can often lead to business failures.

Such is the story of Dubai OFW Maria Jazmin Felicio. Dabbling in various jobs since her return to the country, Felicio continued to face challenges in providing for the family. During her stint as a home-based researcher, she decided to open her own sari-sari store.

Despite her background selling homemade yema during her youth and inventory management training in her career, there were still a handful of obstacles in running her store.

“We are now on the fourth session of the training, and I am learning a lot of concepts and skills on how to better improve the way we are running the sari-sari store,” said Felicio.

In 2011, Coca-Cola Philippines rolled out the STAR Program in partnership with the Technical Education and Skills Development Authority (TESDA). Designed for women micro-entrepreneurs who own and manage sari-sari stores or carinderias, the Program hopes to address the barriers these women face by helping them achieve business success. The STAR Program has three components: access to training, access to resources, and access to peer mentoring.

“Coca-Cola is very much part of communities. So if we grow, our growth must be inclusive. This is the reason why we continue to pursue initiatives that have both social and business impact. The STAR Program is shared value in action. Through our core business of selling Coca-Cola products, we can address one of the key social issues of our time which is women economic empowerment,” said Diego Granizo, President and General Manager of Coca-Cola Philippines.

Coca-Cola Philippines also established the STAR Center for Excellence facility at the TESDA Women’s Center as the center for innovation to continuously find ways on how to enhance and scale the STAR Program. The center also serves as a venue for the training and accreditation of facilitators to be deployed throughout the country. To date, the STAR Program has 340 accredited facilitators teaching and training women retailers to become better entrepreneurs. The STAR Program is being implemented in over 47 locations nationwide and has reached more than 52,000 women.

Marking the fifth year of the 5by20 STAR Program, the program is being expanded to include women OFWs like Felicio. The Department of Labor and Employment (DOLE) and Coca-Cola Philippines have agreed to provide enabling mechanisms that can potentially help women OFWs explore possible economic opportunities when they come home. The Women Entrepreneurs Reintegrated and Economically Active at Home (WOMEN REACH!) program aims to economically empower women OFWs by providing them access to business skills and life training, and access to business enhancement or start-up capital assets.

The program aims to mitigate the social cost of women migration for work. It is targeted towards our returning women OFWs, especially our domestic workers and caregivers. The program shall equip them with the right support to build their entrepreneurial confidence so they can establish or enhance their own micro-enterprises within their own localities and eliminate the need for them to go abroad again.

While there is economic benefit from women OFWs, it comes with a very high social cost – the separation of family as a unit, which often led to estrangement, alienation or worse, disintegration. According to the Institute of Labor Studies of the Department of Labor and Employment (DOLE), the continuing feminization of migration has the most detrimental impact to the family and children, especially when the mother is the one who goes to abroad for work because along with her also goes the caregiving and nurturing responsibilities.

This public-private partnership is a combination of several program components, the Coca-Cola Philippines STAR (Sari-Sari Store Training and Access to Resources) and DOLE’s Assist WELL (Welfare, Employment, Legal and Livelihood) programs that can readily accommodate women OFWs as they return to the country.

On its first run, 34 women have been enrolled, including 29 OFWs and five others who are immediate family of OFWs. They are expected to graduate from the training program by the middle of June this year. ADVT.