A prescription for the PH economy to the next President 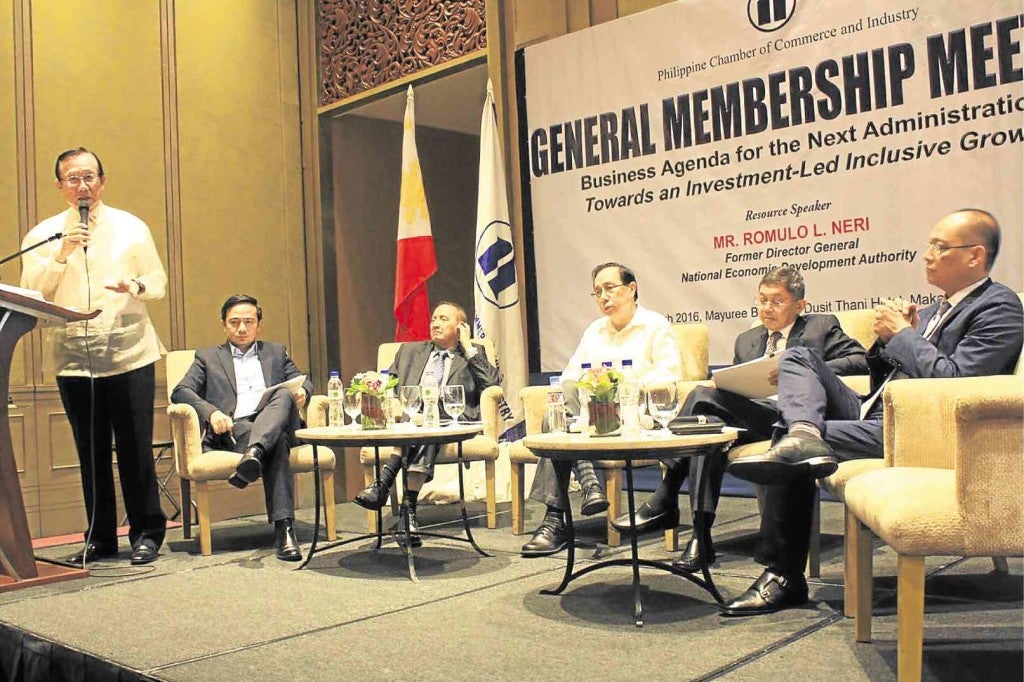 These are just some of the jaw dropping hindrances to businesses and economic growth the Philippine Chamber of Commerce and Industry (PCCI) wants the next President to address.

PCCI has over 20,000 registered members nationwide, making it the largest umbrella organization—headcount-wise—for the business sector in the country. But the group representing companies from the small and medium enterprise (SME) category is often overshadowed and beaten to the draw by its more popular big business counterpart, the Makati Business Club, especially when it comes to advocating national issues that affect the economy.

Not this time around, though.

This year, PCCI—under the leadership of its current president George Barcelon—has jumped the gun in an effort to make sure the Philippine economy runs like a well-oiled machine over the next six years.

To do this, the business group has prepared a business and economic roadmap that it will present to the country’s next president, the identity of which will be decided in tomorrow’s elections.

Dubbed “Giant Steps” (an acronym representing the sectors the next administration must focus on to improve the country economically), the plan is now undergoing final revisions before it is turned over to the next Chief Executive.

“All the presidential candidates have the interest of the country at heart,” Barcelon says. “On how they will do it, we will try to influence the roadmap, hopefully with whoever the next President will be.”

According to PCCI, it is important to focus on these sectors because “although the country has recently experienced improved [gross domestic product] growth and macroeconomic stability, poverty, joblessness and underemployment still remain high.”

“More needs to be done to make economic gains inclusive and sustainable,” the group says in the draft document. “An investment-led rather than consumption-driven growth will create more jobs and raise workers’ productivity and incomes and reduce poverty.”

“Competitiveness and sustainability entail that the regulatory environment and physical infrastructure support the growth of business,” the group says. “Inclusivity demands that agriculture, manufacturing and tourism, especially the MSMEs (micro, small and medium enterprises) are provided support mechanisms for them to access markets and grow.  Addressing these three issues effectively will require coordinated and parallel action.”

PCCI says good governance will promote ease of doing business through the adoption of best practices in both the public and private sectors.

Among the group’s key proposals are streamlining and facilitating business permitting and licensing through computerization, decentralization and providing an effective one-stop action center for investors, which will significantly cut through the red tape in the bureaucracy.

“[We should] avoid a repeat of the Hanjin experience in Tagoloan and Villanueva in Misamis Oriental, the Xstrata experience in South Cotabato, and BHP Biliton in Palawan where more than 6,000 potential jobs were lost for each project,” it says.

“The reliability of our infrastructures is key to improving connectivity and fueling the growth of our industries,” PCCI says, adding that priority must be given to improving the road and rail systems nationwide, as well as airports and seaports.

Other infrastructure subsectors that merit closer attention from the national government are telecommunications, energy and power, water security, environmental enhancement and disaster mitigation.

PCCI also wants the next President to redouble efforts in developing agriculture, manufacturing and tourism. It says these three sectors are “considered the growth drivers of the economy, the ‘great levelers.’”

“Considering that agriculture employs 30 percent of the country’s workforce, tourism and manufacturing at about 10 percent each, the expansion of these sectors will naturally lead to local economic development, export growth, job creation and international competitiveness especially in the countryside,” the business group says.

Meanwhile, “S.T.E.P.S.” represent the necessary ingredients that will improve the G.I.A.N.T., says PCCI.

Science and technology is already widely-acknowledged as important drivers of economic performance, the group says.

“As the more developed economies such as the US, the EU countries, Japan, Korea and even China have demonstrated, the ability to create, distribute and exploit knowledge is a major source of competitive advantage, wealth creation and improvements in quality of life,” it says.

PCCI laments the issues hampering the ease of doing business—insufficiency of infrastructure, neglect of key economic drivers especially agriculture and the lack of available technology and skilled manpower—“have held back businesses from expanding, negatively impacted on the retention of large manufacturing industries and affected the country’s attractiveness as an investment destination.”

It says addressing these problems will help the country take the next step in its journey of development.

“We can only hope that the next President is listening,” PCCI says.