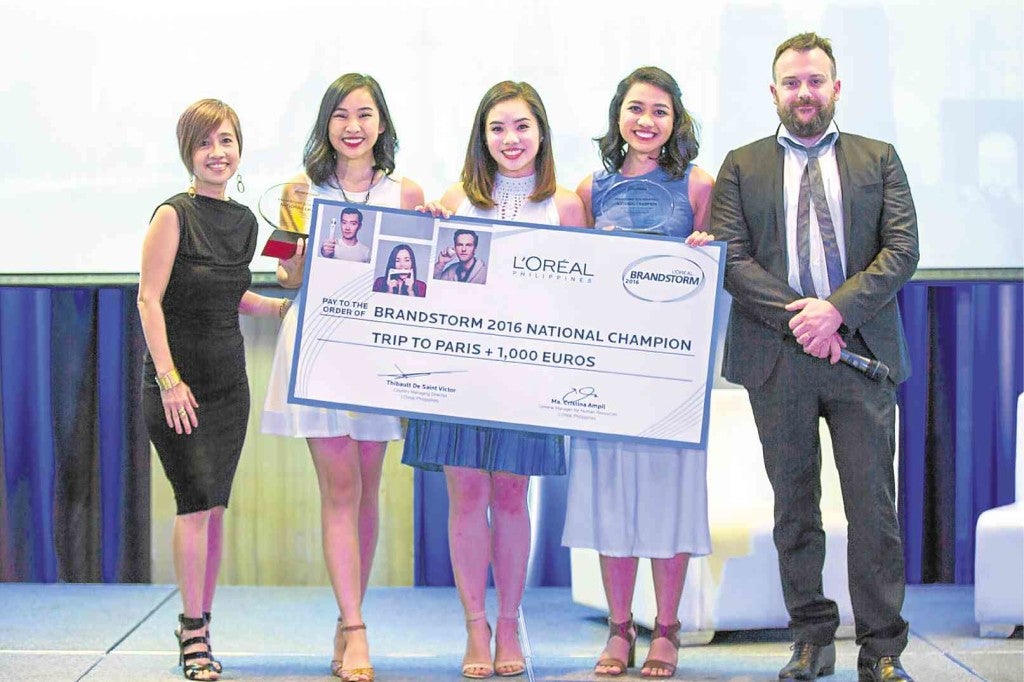 A team from the Ateneo de Manila University will fly to Paris in June to represent the country and compete with 44 other teams in the annual marketing competition L’Oréal Brandstorm 2016 International Finals.

L’Oréal Brandstorm challenges students to take on the role of innovators and digital leaders for a four-to six-month business journey where they work on real life challenges faced by L’Oréal’s international brands.

In the last two years, Brandstorm has evolved to inspire students to come up with the best ideas beyond product innovation to cope with today’s challenges. For this year, L’Oréal Brandstorm 2016 introduced the Digital Challenge with La Roche-Posay (LRP).

The challenge was to help the brand in attracting and recruiting new and young consumers (15-25 years old) through a digital communication and services strategy while keeping in mind the brand’s advocacies and mission to bring a better life.

Its strategy focuses on the idea that beauty is centered on the skin’s health, and that real beauty needs no filters, just bare and beautiful.

Bayta says they’re thankful that they won for Ateneo, given that their course is not included among the school’s honors programs.

“I think it’s a good way to show that … we can do it, we excel with what Ateneo trained us to do, which is marketing,” she says, adding that being a millennial became both an advantage and a challenge for them.

“It became so hard for us to understand Generation Z (15 to 25 years old). They are so different. We studied them because we cannot be confined with the fact that ‘we were like this when we were 15’ because they are not like that anymore,” she says.

For 24 years, the renowned business and innovation competition has attracted more than 80,000 participants. It started in France in 1992 as a marketing competition. In 1996, it became an international competition, initially with seven countries. More countries joined in the succeeding years.

The Philippines started joining in 2009. In 2012, the Philippine team from the University of the Philippines – Diliman won the judges over in Paris to take the L’Oréal Brandstorm International Finals championship. The UP team took on the challenge for The Body Shop and created an innovative new product line for children.

Hoping to repeat the country’s feat in 2012, Lim says her group will step up its game for the international finals.

“We will change the way we present our data and our materials because right now, it’s very linear and very academic,” she says.

Aside from having a chance to compete in the international finals in Paris, Little Lion also won P50,000 for ADMU while their mentor will get to attend the L’Oréal’s Professor’s Masterclass. The team also got pocket money worth 1,000 euros for the trip to Paris.

From more than a hundred teams, only six finalist teams made the cut to the National Finals with the two finalists each from Ateneo De Manila University (Little Lion and SGB), De La Salle University (Team Magnifique and The Muffin Men) and University of the Philippines Diliman (La Roche Poseurs and Team Star).

“I do believe Filipinos, especially the young ones, are trained to communicate their thoughts.  I always believe we have a very good chance because we are very creative with the way we strategize and the way we communicate,” he says.

He adds that this year’s Digital challenge is relevant to any company, any individual.

“If we don’t adapt to where the world is going through (digital), then you are going to get left behind and that should be a priority for all companies,” Narciso says.