THE POOR performance of Philippine agriculture exports is a sad narrative. Expanding exports are key to agricultural growth and diversification.

Data from the Food and Agriculture Organization (FAO) of the United Nations (UN) show that the Philippine record is dismal.  In 2013, the Philippines exported only $6.1 billion. Compare this with Indonesia’s $38.9 billion, Thailand’s $37.9 billion, Malaysia’s $27.8 billion and Vietnam’s $17 billion. Data from other reliable sources (UN Trademap and World Trade Organization or WTO) reflect higher similar rankings in 2014.

Three countries were outstanding in growing their seafood and aqua exports between 1980 and 2013.   Vietnam multiplied its exports over 630x to $6.9 billion, Thailand 19.7x to $7.1 billion, and Indonesia 19.1x to $4.0 billion.  Philippine exports (tuna, carrageenan, and shrimps) rose 8.4x over the period versus Malaysia’s 6.3x.

Which Philippine President did well in growing agri exports?

However, compared to Asean peers in similar periods:

Ferdinand Marcos was last (-7.4 percent a year) in Asean

Fidel Ramos (+3.5 percent) second to the last after Thailand.

Joseph Estrada (-4.8 percent) was next to last after Malaysia.

Benigno Aquino III (+12.3 percent) was first albeit from a low base. 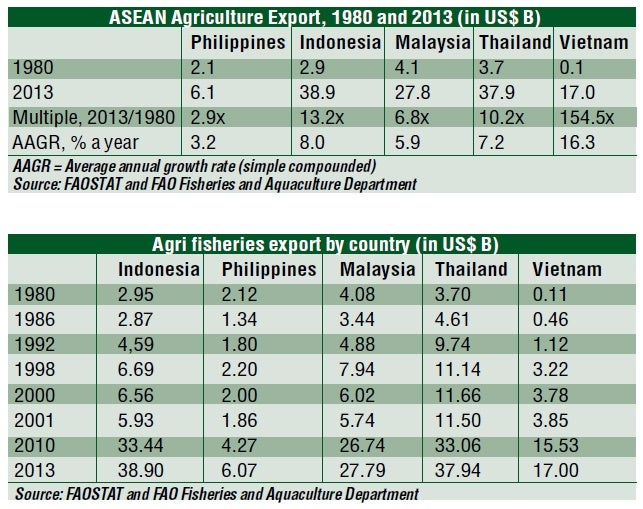 There are surely world market factors that affect export earnings of countries.  This is especially so for primary commodities—palm oil and rubber for Indonesia, Malaysia, and Thailand, and coconut oil for the Philippines.

However, all the Presidents focused on rice self-sufficiency.  Thus, there were less resources (money and manpower) for other products and diversification.

The unfortunate narrative is that while the Philippines has the second longest coastline (36,000 kilometers) in the tropics after Indonesia (55,000 km), its seafood export is only 30 percent of Indonesia’s.

What should the next President do? The appointment of agriculture managers with track record is critical. The key appointments must be based on merits, not party lines, if the country wants dramatic gains, and inclusive growth. The Department of Agriculture leadership must craft strategies and programs in consort with the stakeholders.  They must execute sound cost-benefit analysis on:

Investing in productivity. This includes productivity in crops, livestock and aquaculture. Most of the lands, except for a few like banana, pineapple, hybrid rice, GM corn, have yet to achieve Asean level benchmarks.

Diversifying production. The strongest candidates are coconut intercropping, second cropping of rice lands, and aquaculture. Coconut occupies the largest farmlands and hosts one the largest poverty groups. A robust agri-manufacturing, which creates stable nonfarm jobs, requires a diversified base of products.

Shifting unproductive lands and fishponds.  Upland corn and cogon lands can be shifted to tree crops and fruit trees. Crop choice must be based on market and profitability.

Higher production should lead to a more dynamic agri-manufacturing sector that will increase exports and create non-farm jobs.

For the country to develop, inclusive growth is crucial.   Two of five rural folks (small farmers, fishers and farm workers) live in poverty compared to one out of eight urban folks. The causes of poverty are known, among them:  Low investment which leads to low productivity; lack of nonfarm/off-farm job; inadequate physical and knowledge infrastructure; and poor governance.  The government must get a handle on the solutions.  Leadership and political will are key.

(The article reflects the personal opinion of the author and does not reflect the official stand of the Management Association of the Philippines or MAP.  The author is the Vice Chair of the MAP AgriBusiness and Countryside Development Committee, and the Executive Director of the Center for Food and AgriBusiness of the University of Asia & the Pacific. Feedback at <[email protected]> and <[email protected]>.  For previous articles, please visit <map.org.ph>)