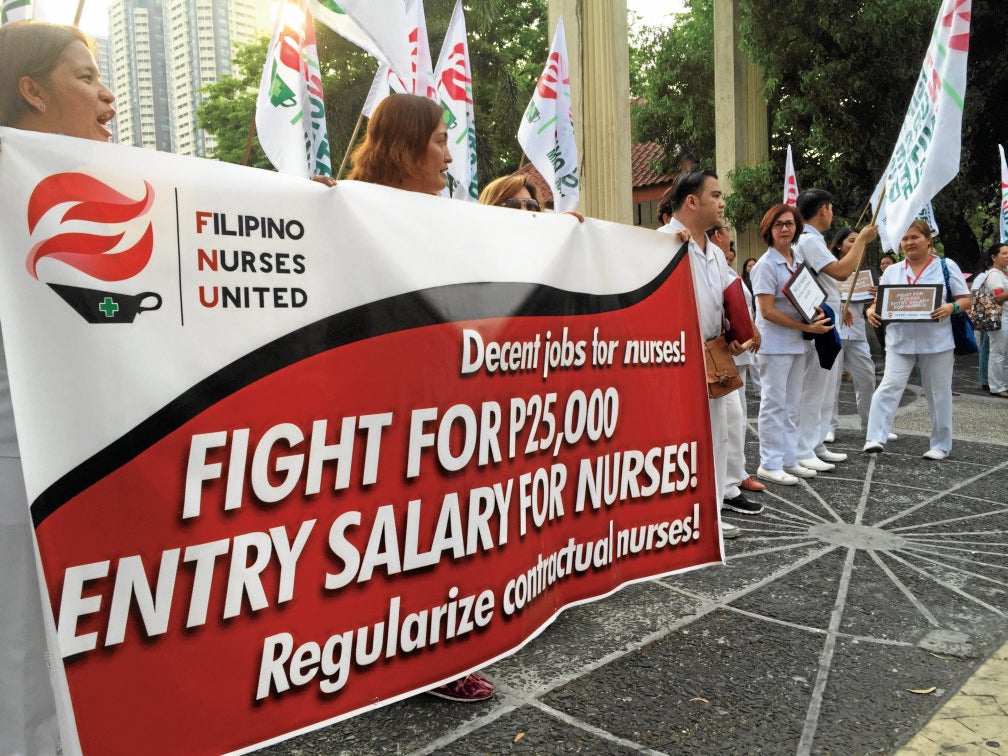 Members of Filipino Nurses United march to Philippine General Hospital on Taft Avenue in Manila to call on government to stop contractualization of nurses and standardize their starting pay at P25,000. ANNELLE TAYAO-JUEGO

After five years of working as a sales merchandiser in one of the country’s biggest shopping malls, Alvin, 29, still has to enjoy health insurance, social security and the other benefits that come with regular employment.

Alvin’s employer, a subcontractor of the shopping mall, tells him of his “good performance” and rehires him every five months. So far, he has signed 10 contracts in the last five years.  In January, he moved to another company as sales merchandiser for a home furniture store,  still under a five-month contract.

The five-month contract is also known as contractualization, 5-5-5 or “endo” (end of contract), a rampant practice mostly in the shopping mall, hotel, restaurant and construction sectors.  Under the scheme, a worker is hired for five months, fired, and rehired for another five months by a subcontractor, who then avoids paying the social and health benefits that regular employees are entitled to.

The practice violates the labor law that requires employers to regularize workers after six months of continuous service and give them full benefits such as  Philhealth and Social Security System (SSS) coverage and housing through the government housing agency Pag-Ibig.

According to estimates by the Trade Union Congress of the Philippines (TUCP), there are around 25 million contractual workers in the country.  The Labor department itself acknowledged that a third of the country’s total workforce in small and medium enterprises are nonregular laborers.

The 5-5-5 contractualization is modern day slavery as workers bear precarious working conditions and are made to shoulder health expenses when they get sick or injured at work, said TUCP spokesperson Alan Tanjusay.

Indeed, Alvin’s case illustrates this. With a P100 daily allowance which he splits into P70 for meals and P30 for transportation, he has to make sure his body can withstand the eight hours of standing required of him at work, as well as the hours-long “standing-room only” commute in full-packed buses.

His meager wage does not allow for emergency expenses that come with getting sick.  Nor is there elbow room for saving up for future needs like housing.

In that forum, Baldoz defined having a decent job  “as a condition when the rights of workers are fully recognized and respected, and they have access to adequate salary and full benefits prescribed by law,” including emergency assistance and benefits in times of emergency and natural calamities.

“An important aspect of decent job is security of tenure which is guaranteed by the labor law,” she added.

The labor official said the right of workers to form unions to redress their grievances should be recognized and respected by employers as well.

But attempts by labor groups Kilusang Mayo Uno, TUCP and the Federation of Free Workers (FFW) to form unions among ranks of contractual workers in shopping malls have failed because of strong union busting mechanisms by management.

Despite such mechanisms, FFW chair Sonny Matula said trade unions continue to organize workers to fight precarious work conditions and the massive practice of contractualization in the Philippines. The immediate passage of  Senate Bill No. 3030 filed by Sen. Aquilino Pimentel III in December last year to ban contractualization and the 5-5-5 hiring practice could help their organizing efforts, he added.

Pimentel’s bill seeks to strengthen security of tenure and social protection for workers by imposing stiffer sanctions on private companies and subcontractors who violate the Labor Code.

But Baldoz, in a a letter reply to the Inquirer, maintained that “Philippine labor laws are sufficient in affording protection and ensuring workers’ rights.  Security of work is a basic right that is enshrined in the Constitution and is one of the pillars of the Labor Code,” she said.

Baldoz cited Department Order No. 18-A issued in November 2011 which, she said, sets standards for legitimate contracting and subcontracting to curb the abuse of workers and ensure compliance with the workers’ right to security of tenure.

“Presently, [the labor department] is conducting compliance audits on big retail establishments, such as SM, Robinsons and Puregold. Problems concerning employment arrangements in security agencies are also being addressed through the formulation of amendments to security agency regulations,” Baldoz told the Inquirer.

According to the Bureau of Labor and Employment Statistics (BLES), agency-hired workers have increased over the last five years, from 364,610 in 2010, to 518,101 in 2015. These workers are mostly in the sectors of gas, steam and conditioning supply, arts and entertainment, financial and insurance, as well as real estate sectors.

International Labor Organization (ILO) country director Khalid Hassan said the rampant problem of contractualization in the Philippines can be addressed through a strong tripartite system, with the government, private firms and workers finding common solutions.

Poverty and the lack of job opportunities in rural areas have forced thousands of young people like Alvin to seek work as contractuals in the city,  while many others leave for jobs abroad.  With workers mostly unaware of their rights, and big companies engaged in union-busting to prevent these workers from asserting their rights, Alvin and others like him continue to face an uncertain future.

This, despite Baldoz’s optimistic view that the country’s 38 million workers and four million OFWs are “one single loud voice and the best asset of our country.”

That view hardly helps Alvin feel any better.  “I get tired being transferred from one mall to another every five months. I want to have a stable job and enjoy the benefits of a regular employee,” he said. TVJ

SM says no to contractualization

Labor Day protests to focus on calls for higher pay, end to contractualization