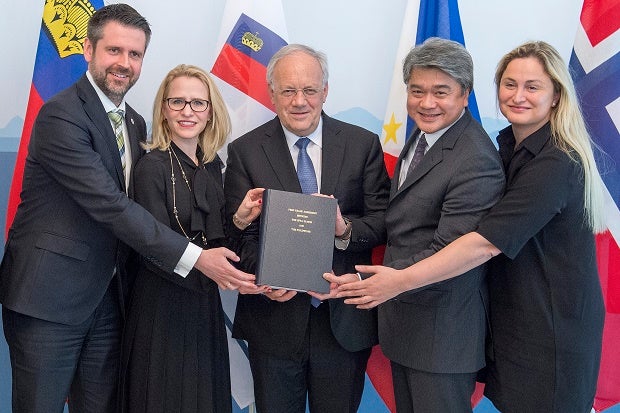 From left: Martin Eyjolfsson, ambassador Iceland, Aurelia Frick, foreign minister of Liechtenstein, Johann Schneider-Ammann, federal president of Switzerland, Adrian Cristobal, secretary of trade and industry of the Philippines and Dilek Ayhan, state secretary of trade and industry and fisheries of Norway, pose after signing a free trade agreement between the EFTA states and the Philippines in Bern, Switzerland, Thursday, April 28, 2016. AP

The Philippines and the four member states of the European Free Trade Association signed on Thursday a free trade agreement aimed at boosting the commercial and economic relations of the two parties.
The FTA was signed by Trade Secretary Adrian S. Cristobal Jr. in behalf of the Philippine government, and by Johann N Schneider-Amman, President of Switzerland and Head of the Federal Department of Economic Affairs, Education and Research of Switzerland; Martin Eyjólfsson, Ambassador, Iceland; Aurelia Frick, Minister of Foreign Affairs of Liechtenstein; and Dilek Ayhan, State Secretary of Ministry of Trade, Industry and Fisheries of Norway.
The signing of the FTA was said to represent an important step in further strengthening the relationship between the Philippines and EFTA. The preferential market access and the rules and disciplines governing the economic relations between the Parties under the FTA will supplement the economic cooperation and exchanges provided under the existing Joint Declaration on Cooperation, thus providing a stronger stimulus for the further development of trade and investment.

EFTA’s key exports to the Philippines were pharmaceuticals, clocks and watches, and machinery while EFTA’s imports mainly consisted of precious metals, electrical machinery and medical instruments.

Philippine exports to EFTA include gold, electronic parts and dental prosthesis.
With a combined population of over 13 million and a combined GDP of $1.2 trillion, the EFTA States are the world’s 9th largest merchandise trader and the 5th largest trader in commercial services, as well as significant actors in the area of foreign direct investment. The Philippines was meanwhile deemed to be one of the fastest and most resilient economies in Asia with over 100 million consumers. CDG