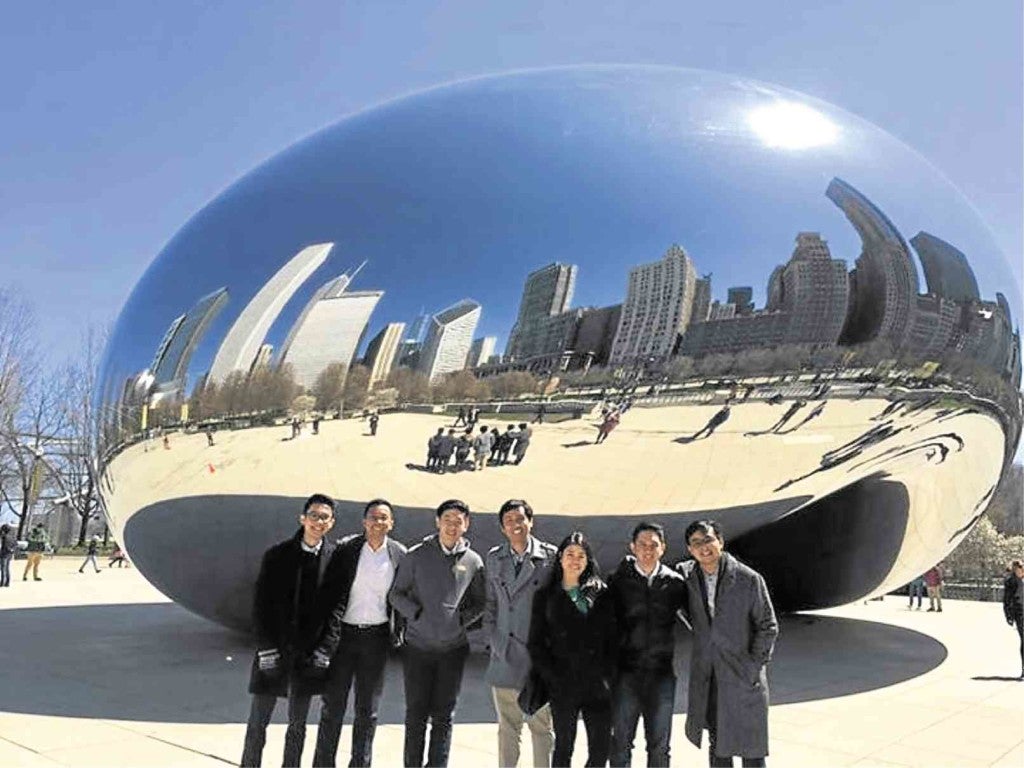 They earned the right to represent the country after winning the national competition held earlier this year.

While they didn’t bring home the global award, these kids already did the country proud by winning the regional tilt, proving that the Philippines has the best next-generation analysts in Asia-Pacific.

The team wrote an in-depth research report on Sy family-led SM Prime Holdings Inc. (SMPH), now among the largest property firms in Southeast Asia, then presented the extensive research to the judges.

“Overall, it is a well-diversified team. They each complement each other while at the same time cover for each other’s weaknesses. It is a very strong team,” said fund manager Mark Canizares, who mentored the team from the national level all the way to Chicago along with faculty adviser Mikhail Llado.

Asked what are some of the outstanding qualities of each of the team members, Canizares said in an e-mail from Chicago that one was very good with numbers, being an Applied Math and Finance major.

He was thus designated the “number and data cruncher in the team.”

One is a top debater and has won national competitions, allowing the team to benefit from his speaking and presentation skills.

Another guy has an interest in a Philippine brokerage house, “so he has a good sense of the market and how research is conducted,” Canizares said.

The lone woman in the team was described as a “management engineering major [with] good presentation and marketing skills.”

“She is grace under pressure,” he added.

For the second straight year, a team from the Ateneo represented the country and aced the regional finals.

To prepare for the overseas competition, Canizares said the team members had to polish their presentation skills as the judges were expected to focus more on how they would present the case to buy the stock SMPH.

They had to read up on macroeconomics, both locally and regionally, and assess the impact and implications on their stock.

The mentor also had to remind the team to hydrate during the long flight to the United States.

Last Feb. 23, this team from Ateneo won the 8th national level IRC competition held at the PSE Auditorium in Ortigas, besting six other universities that joined this year’s challenge. Dubbed “Team RA,” they won a cash prize of P100,000.

CFA Philippines’ head April Tan said: “Going forward, we will continue to organize the local IRC, targeting local universities, in accordance with our initiatives to enhance financial literacy and to develop globally competitive investment professionals. We are reaching out to future investment professionals in an aim to instill in them a commitment to the highest standards of excellence and ethics in doing investment research.”

In their research note on SM Prime prepared as of Nov. 27, 2015, the team issued a “buy” recommendation with a price objective of P24.70 a share, projecting an upside of 14.9 percent.

As of Friday, SM Prime closed at P22.85 a share, giving it a market capitalization of close to P660 billion. At the time the kids wrote their research, SM Prime’s market cap was at P620 billion.

Team RA’s price objective of P24.70 implied a valuation of 28.2 times price to earnings (P/E) ratio.  This means that investors will be willing to pay 28.2 times the kind of money they will make from this stock—which would be higher than the 19.8x P/E ratio of its peers and the 21.2x P/E of the Philippine Stock Exchange index.

The team argued that SM Prime deserved the market premium it was getting, using the discounted cash flow analysis-based sum-of-the-parts (SOTP) valuation.

Sum-of-parts is a way of analyzing a company’s valuation by breaking it down to individual business units, especially of these have different valuation characteristics.

Team RA also found compelling SM Prime’s market leadership in the malls sector, its aggressive expansion in underpenetrated markets and earnings reliability. This team projected that SM Prime could grow earnings per share at a compounded annual growth rate (CAGR) of 14.9 percent from 2015 to 2018.

“This will be driven by an aggressive mall expansion program in underpenetrated markets, which are key provincial centers characterized by increasing consumption and low retail penetration rates,” Team RA said.

The research said it was important to note that 78 percent of consumption happens outside Metro Manila and retail space per capita in these areas averages only 0.03 square meter, much lower compared to Metro Manila’s 0.21 square meter.

“As the Philippines is transitioning into a demographic sweet spot and unemployment levels are dropping, the market for low-cost affordable residential units is expected to grow.  This benefits SMPH’s residential unit, as it caters exclusively to this market, which is underserved by our estimates.  This also limits its exposure to the higher-end segments, characterized by a slowdown in developments and elevated inventory levels.  Moreover, the surge in the BPO (business process outsourcing) sector has encouraged major developers to aggressively ramp up office space, which has caused a short-term oversupply, in our view,” the research said.

“Focusing its expansion plans on its retail unit, SMPH’s nature as a retail-focused property developer allows it to benefit from growth in consumption, while its nature as a real estate developer in general enables its property values to improve with asset appreciation.  Because of its reliable growth, we argue that SMPH is the most strategic and resilient property firm in the Philippines.”