IT IS THE kind of “cure” that everyone—motorists, commuters, firms and road workers alike—would want to have every time road repairs are underway.

For many who have been accustomed to days or even weeks of traffic gridlock given the closures due to road repairs, the promise of a “one-day cure” for concrete can truly be a welcome respite—a 24-hour paving solution that can fast- track the waiting time for the concrete to set and dry, and for the roads to be reopened for use.

And last March 24, as many Filipinos observed Holy Week, the riding public saw how Promptis, a concrete accelerating admixture, allowed this to happen.

The dreaded repairs and re-blocking in EDSA, one of the country’s busiest thoroughfares, took place. But unlike in the past, these happened without much disruption, sparing everyone from the hassle and inconvenience that may be caused by incessant traffic, and thus made traveling then a breeze.

And behind this innovative solution is CEMEX, The Cement Expert. Its CEMEX Research Group AG in Switzerland developed the Promptis, an admixture which has a rapid-hardening, fast-formwork removal concrete technology.

CEMEX Business Development Director Arturo Rodriguez noted that various tests and trials have been conducted to ensure efficacy of this solution. And since it was introduced in the global market, the Promptis has already been used in many major airports and main highways in countries like the UAE, France, Poland, and the United Kingdom.

What makes Promptis a standout is the fact that it can obtain the maximum strength of a concrete in only 24 hours or even less. In contrast, conventional concrete is able to achieve strength after a minimum of three days. 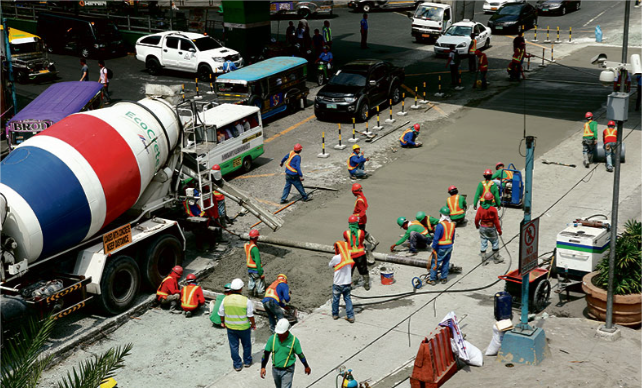 THE USE of CEMEX’S Promptis along Edsa allowed the motoring public to use the roads 24 hours after cement was poured.

This innovative and cost-effective solution thus piqued the interest of the officials from the Department of Public Works and Highways (DPWH), whose confidence in CEMEX’s 24-hour paving technology was gained through successful trials conducted over the past 2 years in Limay, Bataan; Ayala Bridge, Manila; and EDSA-Pasay. 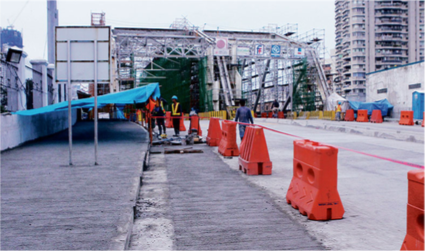 The DPWH has always been on the lookout for innovative and practical solutions that will allow the agency to complete the construction of the different infrastructure projects that are crucial to sustaining the country’s strong economic growth. However, the agency wants to do this without having to sacrifice the quality of its projects, and at the same time, without having to inconvenience the public too much.

“The DPWH is very much committed in giving the best technology and the best approach to the people, the end-users,” Rodriguez said.

And this is where CEMEX is proving to be a valuable partner of the government as it helps ensure quicker access to roads through its 24-hour paving solution. 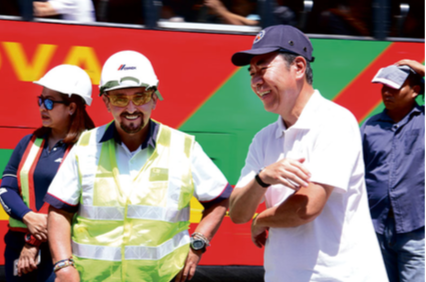 Rodriguez noted that the challenge for them was to meet the 24-hour limit that they have promised. Normally, with the use of Promptis as additive, you can expect to achieve your goal in 12 to 16 hours—at least for other structures. But since this is being used for public infrastructure, CEMEX assures road access in a maximum of 24 hours.

Road closure along the southbound stretch of EDSA from Shaw Boulevard to Boni Avenue started Wednesday night to prepare the roads for concrete pouring. The actual discharging of 335 cubic meters of Promptis 24-hour concrete in the first section was done Thursday at exactly 8:30 a.m. This area where Promptis was poured was evaluated, passed standards for flexural strength, and opened in 16 hours—which was less than the original 24-hour commitment made by CEMEX to DPWH. Of the rehabilitation works performed on EDSA, the only DPWH-approved 24-hour concrete was CEMEX’s Promptis.

Present then were DPWH Secretary Rogelio Singson, and DPWH Director for NCR Melvin Navarro, along with CEMEX officials. While the Promptis technology may not be entirely new to CEMEX, it was the application and usage for roads in the Philippines that made it innovative.

Such a proven technology can be a crucial factor as the country further beefs up its public infrastructure spending this year to meet the growing requirements of a robust economy. A single stretch of road is paved at least three times faster with the use of Promptis, thus enabling DPWH and its contractors to do more construction and rehabilitation work given a shorter period. This increased efficiency will not only allow the government to open roads to traffic within 24 hours, but will also contribute to expediting growth.

Meanwhile, the DPWH has acknowledged the importance of Promptis’ innovative technology by granting CEMEX Philippines a certification, which meant that this product has been approved for use for one- day concrete applications in public road projects across the country.

This was effected through Department Order (D.O.) 61 Series of 2016 or the “Standard Specification on the Use of Promptis as Concrete Accelerating Admixture to One-Day Portland Cement Concrete Pavement.”

“(Promptis) is the only pavement technology certified by the DPWH to be used in any one-day concrete application in public road works,” Rodriguez said.

Indeed, CEMEX has proven anew how it managed to efficiently respond even to the most pressing infrastructure needs of the country. For many years, it has taken on the challenge and responsibility of providing the local market with high-quality products and advancements that help their customers and partners.

At the same time, this development also reflected the commitment of CEMEX to place its customers at the heart of its efforts, as ultimately, the faster construction and rehabilitation of roads always benefits the public.

“After the many trials, periods of research and the consistently good results, we (finally) got the D.O., an official document, which gives us license to use Promptis, a successfully tested solution, for public roads. And we are really proud to say that we are the only one that has been awarded with a D.O. for Promptis, a brand that is proudly engineered by CEMEX. In fact, we will be undertaking road rehabilitation projects along Commonwealth and C5 within the month to ease traffic in these heavily utilized roads,” Rodriguez concluded. ADVT.