CASINO junket operator Kim Wong, through his lawyers, on Monday returned P38.28 million in stolen money from Bangladesh’s central bank, but the turnover hit a slight snag when authorities found two fake P500 bills amid the mountains of cash.

Wong’s camp said it would return a third tranche, amounting to P450 million, in 15 to 30 days.

Last week, it turned over $4.63 million to the Anti-Money Laundering Council (AMLC) office in the Bangko Sentral ng Pilipinas (BSP) complex in Manila.

AMLC Executive Director Julia Bacay-Abad said two counterfeit bills were found during the counting of P38.28 million that started at 11 a.m. and ended at 1 p.m.

The BSP cash department assisted in counting the money using machines that can detect fake banknotes.

The turnover was witnessed by officials of AMLC, Bangladesh Bank (BB)  and Bangladesh’s embassy in the Philippines. AMLC issued an acknowledgment receipt for the amount to be turned over to Bangladesh Bank.

The money will be stored at the BSP’s vault for safekeeping, while the AMLC is making arrangements with the Bangladeshi government for its return, Abad said.

Abad said the AMLC was informed that Wong’s camp would return the additional money on Monday morning, after Ferrer called up BSP Deputy Governor Vicente Aquino before 10 a.m. to inform him that they would bring the money to the AMLC.

In a letter to AMLC Chair Amando M. Tetangco Jr., Wong’s lawyers said, “(W)e reiterate that this token of utmost sincerity and effort to cooperate and retrieve the funds abandoned by Gao Shuhua in [Eastern Hawaii] and/or Midas Casino should not be interpreted or construed, directly or indirectly, as admission by EHL or Kam Sin Wing [Kim Wong] of any guilt, or participation in, or complicity to the offense for which Kim Wong is being charged by AMLC or any suit/s, case/s or proceeding/s relating to or in connection with the subject matter of the aforementioned hearing or investigation.”

Fernandez said it would take 15 to 30 days to raise some more funds before Wong could return another P450 million that was earlier borrowed by Gao. “According to Wong, he was even willing to sell properties to be able to raise the necessary money,” he said.

The lawyer said Wong would attend today’s (Tuesday) Senate hearing “because he wants to finish this thing as soon as possible.”

Abad reiterated that “as far as AMLC is concerned, a bigger amount of money should be recovered from their groups” as “there’s still much to be returned.”

“The amount of $81 million has been stolen from Bangladesh Bank, was remitted or received by these groups. So, we have to recover the same amount of money,” she said. 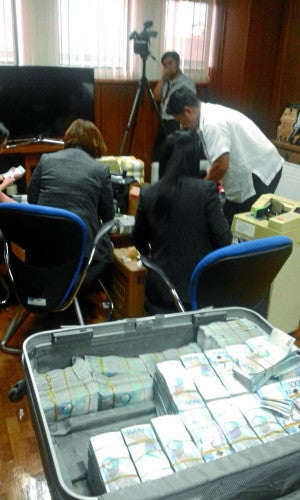 SECOND INSTALLMENT It took personnel of the Anti-Money Laundering Council (AMLC), who used machines, two hours to count the P38.28 million, consisting of P500 and P1,000 bills, that casino junket operator Kim Wong turned over to the AMLC on Monday. CONTRIBUTED PHOTO

She confirmed reports that AMLC had asked Wong’s camp to directly turn over the money to  Bangladesh Bank “because this money belongs to the Bangladesh government.”

Earlier, the turnover hit an impasse at the AMLC office.

Sources said AMLC officials insisted that the P38.28 million be given directly to the Bangladesh ambassador to the Philippines.

Wong’s counsels maintained that, in accordance with the Senate blue ribbon committee’s mandate, the funds “abandoned” by Gao in Eastern Hawaii should be turned over to the AMLC/BSP for “safekeeping.”

“We have no mandate to turn it over to the Bangladesh government. Our client, Mr. Kim Wong, has no business speaking directly with the Bangladeshis. Our clear understanding is that after turning over the funds to AMLC ‘for safekeeping’, its disposition should be subject to a government-to-government agreement,” Fernandez said.

To help the Bangladesh Embassy in Manila beef up efforts to recover the money stolen by cyberthieves, two officials of Bangladesh Bank went to the Philippines.

“The two BB officials will assist him,” Saha told reporters after a meeting of the coordination council of regulators at the BB headquarters in Dhaka, the capital of Bangladesh. With reports from Daxim L. Lucas and The Daily Star/Asia News Network