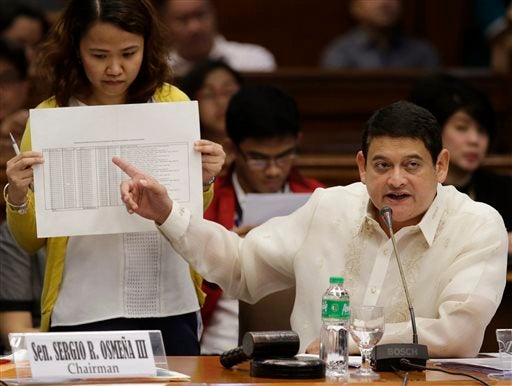 Philippine Sen. Teofisto Guingona III gestures as he shows a document during hearings into how about $81 million of Bangladesh’s stolen funds were transmitted online to four private accounts at a branch of the Rizal Commercial Banking Corp. during the Philippine Senate Blue Ribbon Committee probe on Tuesday, March 29, 2016 at the Philippine Senate in suburban Pasay, south of Manila, Philippines. (AP Photo/Aaron Favila)

MANILA, Philippines — About $6.9 million out of $81 million stolen from Bangladesh’s central bank and sent to fake bank accounts in the Philippines remain in local casinos and may still be recovered, the Philippine Senate heard in testimony Tuesday.

Kam Sin Wong, a Chinese junket operator known in the Philippines as Kim Wong, told the hearing that the $81 million was remitted by two casino junket agents and gamblers including a Beijing resident named Gao Shuhua whom he has known for eight years and a Macau resident named Ding Zhize he just met in February.

The laundering of the stolen money in the Philippines has added pressure on the Southeast Asian country to close loopholes in its financial system.

Wong volunteered to return $4.63 million dollars that remains in a junket account in Solaire Resort and Casino, and another 40 million pesos ($863,000) still in Midas Hotel casino under the account of his company, Eastern Hawaii Leisure Co.

Silverio Benny Tan, corporate secretary of Solaire’s operator Bloomberry Resorts Corp., told the hearing the casino has frozen 108.67 million pesos worth of chips and money in different denominations confiscated from the gamblers when the bank heist issue came to light.

Wong alleged $17 million is still with remittance company Philrem, which the company owners denied during the hearing. Wong said Gao also paid him 450 million pesos ($9.71 million) for a loan that covered Gao’s losses in an earlier gambling spree in the country. He said if compelled to do so, he can also return that money.

Casino operators and government regulators said it may be difficult to account for the rest of the money, which was used at gambling tables. Wong said $370,000 in cash was withdrawn by the casino junket agents in violation of their agreement that all the money would remain in the casino accounts.

The $81 million was remitted to five accounts created with fictitious names at a branch of the Rizal Commercial Banking Corporation, consolidated then remitted to the casinos and junket operators through Philrem.

Wong said Maia Deguito, the bank branch manager, and Gao met in May in his office to discuss opening the accounts for a big amount of money that will be brought in and invested by Gao. Wong said he had no role in the fake paperwork and that was all arranged by Deguito.

On Feb. 4, Wong said Gao told him that he and Ding would close their casino in Macau and invest the money in Manila. Gao also reportedly said he had money from the sale of his land in China.

On Feb. 5, the money was transferred in portions to the five fictitious bank accounts. Philrem then electronically transferred the money to the casino accounts while other amounts were delivered in cash to Wong and the junket agents, or received by Wong at the house of Philrem owners Salud and Concon Bautista.

Bangladesh also turned over to the committee a list of 30 other suspicious transactions that the Federal Reserve Bank of New York did not execute. The list showed another $850 million would have been transmitted to the fake accounts in the Philippine bank had those transfers not been stopped. TVJ